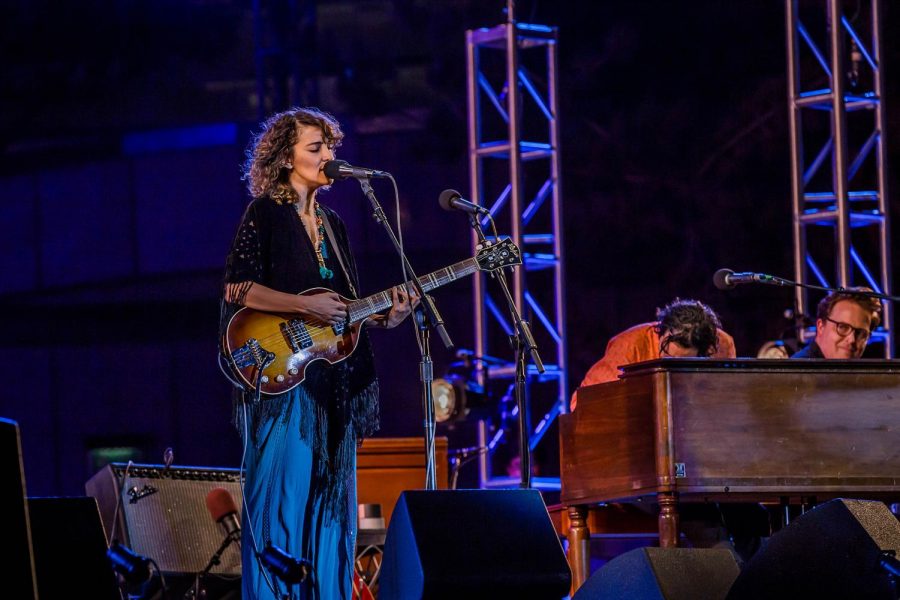 Gaby Moreno's music is strongly influenced by Blues and Jazz. Her love for "vintage" items is present in her work; from collecting vinyls to preferring classic guitar designs such as the hofner model as seen in this picture. Photo Credit: Courtesy of the artist.

One of Gaby Moreno’s main characteristics is her love for old instruments, as well as a “vintage” aesthetic that accompanies her on stage. On July 6 Moreno shared the stage with the lead singer of La Santa Cecilia, La Marisoul. Together they performed a tribute to their “musas,” something that La Santa Cecilia has been doing since the release of their previous album, but a new experience for Moreno.

Eager to share the stage, both female artists performed songs from Chavela Vargas, Joni Mitchell, Mercedes Sosa, Nina Simone and Violeta Parra. Although they were all important, Moreno’s personal “musa” was Simone, a woman who has had a strong influence on her work as a singer, songwriter and composer.

One of the songs performed was “La Maza,” originally sang by Sosa. On stage, La Marisoul opted for a folkloric floral orange skirt while Moreno had a more discreet look in black pants, a white shirt with a small floral pattern along the neck, and a large black hat that gave her a 1960s look. It’s a “vintage” look, a word she even uses to refer to the kind of music she loves and performs.

Officially recognized as a “Spanglish folk-soul,” Moreno’s songs are a mixture of soft jazz and blues. Angelenos can expect a soothing night during her performance at the Skirball’s free Sunset Concerts series on July 18.

Although her favorite guitar player was Jimi Hendrix as a teenager, Moreno found herself influenced by musicians like Sister Rosetta Tharpe and Louis Armstrong. Even now some of her favorite musicians include Esperanza Spalding and St. Vincent, as much as the Spanish-speaking singers she paid tribute to in her previous performance. The combination of all these elements is found in Moreno’s personal work. Nevertheless, she has taken on various projects that have challenged her musicianship throughout her career.

As an immigrant from Guatemala, Moreno has found success with both English and Spanish-speaking audiences. It’s likely you already know of Moreno’s work without realizing it. If you’re a fan of the show “Parks and Recreation,” then you’re already familiar with one of her compositions every time you watch the show’s intro, which also happens to be an Emmy-nominated Original Main Title Theme Song. Her voice is also present in the main title theme of “Elena of Avalor,” a show featuring the first Latina princess in Disney’s catalog.

For many Spanish-speakers, on the other hand, her voice was all over the major Spanish-speaking radio stations in with “Fuiste Tú,” a Top 10 Billboard song in 2012, originally written and composed by Guatemalan artist Ricardo Arjona featuring Moreno on vocals. Currently, she is working on an upcoming album with American producer and musician Van Dyke Parks.

A collaboration between them can already be found in “The Immigrants.” Jose Diaz from NPR investigated the origin of the song upon its release, discovering it was originally written in 1998 by David Rudder. In the article, Moreno shared her thoughts on the border crisis that has been present the last couple of years. As an immigrant, Moreno has been able to help youth from her country who are in the same shoes she once was as a student. Moreno is an alumna of the Musicians Institute, located in Los Angeles, and she is now able to give the same kind of guidance she received as a former student of music to immigrants like herself.