Fashion&Identity: Sparking Change with What We Wear 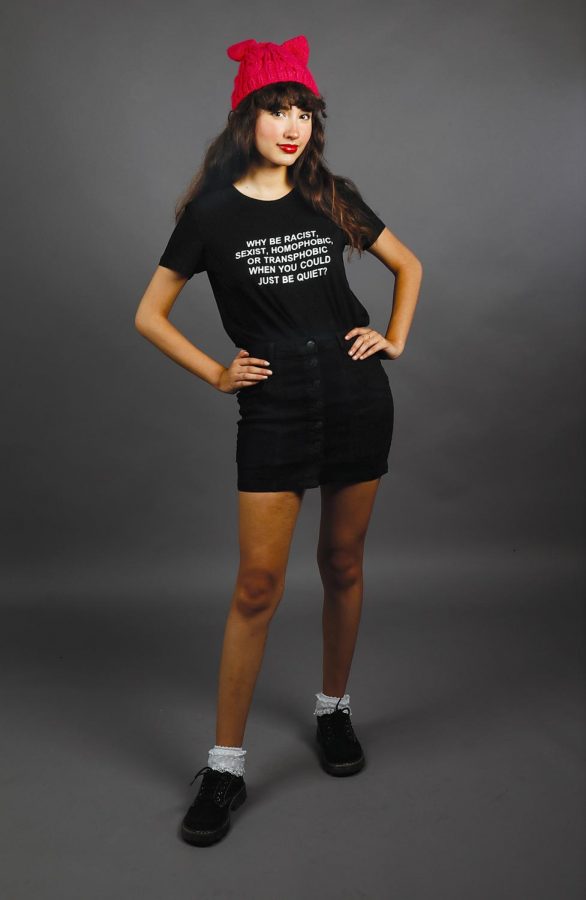 Protest art can send a powerful message that in turn serves as a catalyst for cultural shifts. In collaboration with Brooklyn White, a reporter for Teen Vogue, Bitch Media, and more, here is a list of the top five historically influential pieces of clothing in activism.

The slogan tee made one of its most notable appearances in 1980 when Katharine Hamnett met Margaret Thatcher and sneakily revealed a shirt under her coat that read “58% DON’T WANT PERSHING.” According to Dazed magazine, the shirt was representative of the opposition to the Prime Minister’s agreement with the U.S. to station nuclear missiles in Britain. Since then, “runway activism” has become more common in high fashion. Most recently, Maria Grazia Chiuri, the first female creative director at Christian Dior, created the “We Should All Be Feminists” slogan tee.

In the western world, the pink “Pussyhat” became a symbol of feminism after Donald Trump became president. During the historic Women’s March of 2017, the sea of pink hats was a direct sign of uniformity in a time where the nation felt divided. But later, it became a topic of controversy. “The ‘This Pussy Grabs Back’ shirts were criticized for the same reason (using) the uterus as feminist art is critiqued — it excludes trans women,” White said. “But, I don’t believe the intent was malicious. I think people also wondered what the shirts, hats and sweatshirts would actually accomplish and brushed them off, clumped it together with show-y, white feminism.”

The Black Panther Party’s all-black uniform reflected their ideas. All black ensemble made them appear unified and the dark shade was meant to cover their faces to keep them anonymous, so their loved ones would be safe. The black beret was in opposition to the green ones worn by the military. “They were soldiers fighting for the freedom and fair treatment of Black Americans,” said White. “When you saw someone wearing all black with a beret and an afro, you knew the message they were trying to convey.”

The miniskirt became politicized when designers like Christian Dior declined to show them on the runway because of the raised hemlines. According to W magazine, Dior’s failure to show the miniskirt on the runway in 1966 sparked the commencement of the British Society for the Protection of Mini Skirts. The group protested outside of high fashion shows with signs that read “Mini skirts forever.” Since then, the miniskirt has long existed as a symbol of women’s liberation.

There once was a time where it was an embarrassment for women to go out with visible signs of makeup on their faces. Red lipstick was among the most scandalous of the lot. “It’s subtle, but it was once synonymous with feminism,” said White. “For centuries, lipstick (especially red lipstick) was thought of as demonic because of the biblical story of Jezebel. Women were afraid to wear makeup period and specifically shied away from lipstick because of the negative connotation. Suffragettes protested in red lipstick.”