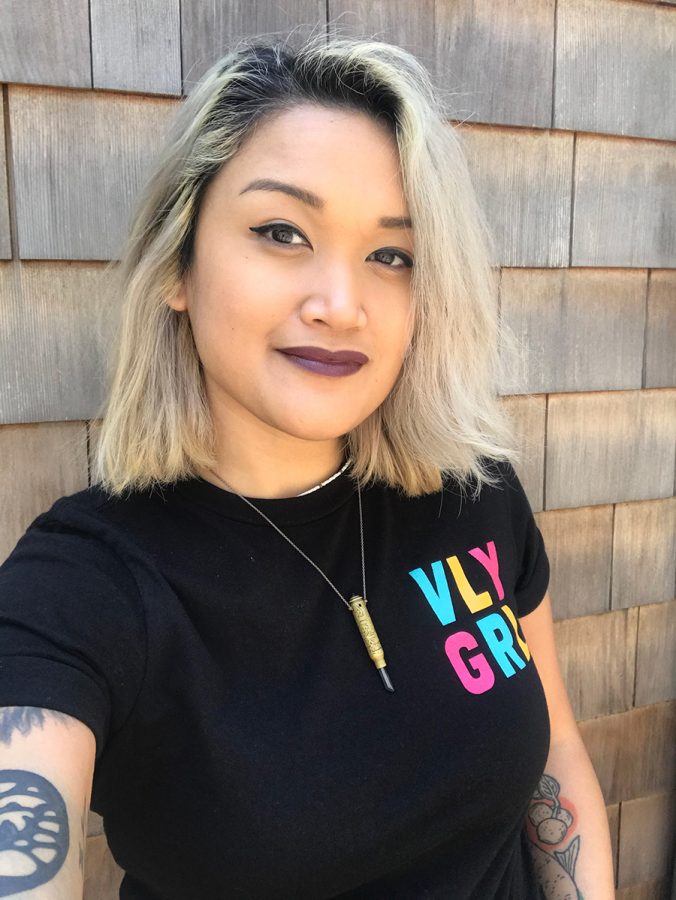 The Valley Girl as defined in ’80s pop culture is typically a ditzy white blonde that can be found in the local mall because OMG, it’s like, totally bitchin’. With a stereotype that is drowning in materialism and airheadedness, it is not only an insult to female intelligence but grossly under-represents the true demographics of the San Fernando Valley.

With this in mind, a CSUN alumna took it into her own hands to redefine the bimbo image by creating the clothing and accessories brand VLY GRL, dedicated to showcasing real valley babes of all backgrounds.

“I lived in Reseda, went to school in Van Nuys and Chatsworth, and studied at CSUN. I love that I grew up around such diverse groups of kids throughout my education,” said Alisa Damaso, creator of the accessory and clothing brand VLY GRL. “Not everyone gets to have that experience, and I’m so grateful for that. I’m still really close with friends I made in grade school, high school and college.”

But like most of us valley locals, she never encountered the valley girl stereotype akin to Cher Horowitz from “Clueless” or Elle Woods from “Legally Blonde” until she lived somewhere other than the place she’d been raised in.

“I didn’t experience the annoying stereotypes first-hand until I moved out of the Valley seven years ago,” she said. “People outside the SFV really don’t know what it’s like, and I get it, the Valley isn’t a destination city. But it doesn’t try to be! It’s full of all kinds of people, it’s got hard edges, and it’s unapologetically real — and that’s what I love about it. I just shut people down when they’re being ignorant.”

Damaso saw a need for Valley flair that truly represented the women of her hometown. After a career change from writing to graphic design she was inspired to create VLY GRL, a brand that would allow her to redefine the valley girl in her own terms.

“VLY GRL came from a combination of things. I had just switched my career from writing and communications to graphic design and I wanted to start a fun brand that showcased my skills and style so I could land a job,” said Damaso. “I was also sick of the dumb comments about how, like, omigawd, I’m, like, a Valley girl or whatever? The San Fernando Valley is made up of 1.77 million culturally diverse people. Valley girls aren’t just one way. So that outdated stereotype is just offensive. I saw a need for Valley flare in the pin game and it was an opportunity to take back the designation and redefine it on my own terms.”

The brand ranges from T-shirts to hoodies, pins and stickers, and even her own zines that showcase a collection of works from valley girls, nostalgic vibes of growing up in the SFV, and film photography of the community.

“It feels great to be able to provide a way for others to express their love and pride for their home. The VLY GRL Zine is one of the biggest ways my brand shows the diversity of the Valley; it’s a compilation of creative works by women from or based in the SFV,” Damaso said.

The use of blue, orange and pink in the logo is a reminder of how colorful the Valley is and what makes our community different than others. For Damaso, the brand has been founded in her personal baseline by employing with inclusivity and diversity which she expresses is something that needs to be a standard for everyone.

“The more exposure marginalized communities get, the more we can understand each other better. So properly representing the San Fernando Valley, a place that’s been caricaturized by mainstream media for decades, is a progression of that,” she said.

As a daughter of parents from The Philippines, Damaso has also noticed a misrepresentation of her identity in the media, “A lot of us, especially Asian American and Pacific Islander (AAPI) kids, grew up ashamed of our roots and struggled with our identity because we are not considered ‘normal’ in mainstream society since the perceived default American is a white person. But if you live in any metropolitan area, your eyes tell you a different story,” said Damaso. “So that’s why I feel so strongly about representation in the media — even though kids of color grew up surrounded by people who looked like them, they struggled with where they fit in the broader world, because we can’t be what we can’t see. It’s getting a lot better these days though, which is so awesome.”

Between her full-time job and playing shows with her band — Vincent Gargiulo National Park — Damaso will continue to expand her brand that represents her community.

“For now, it’s important for me to keep the zine going and cultivate a sense of community and sisterhood among Valley girls,” she said.