8 one 8: Brewing Culture in the Valley 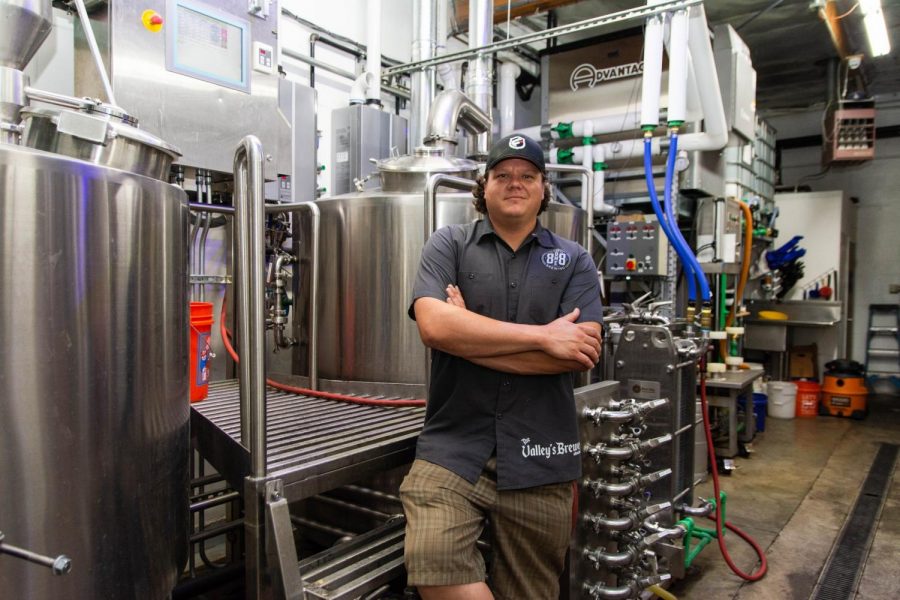 Some of the finest inventions have been created in garages, including Derrick Olson's first batch of beer in his hometown of Sylmar which gave birth to 8one8 Brewing for locals to enjoy. Photo credit: Joshua Pacheco

Out of all the beers on tap available at CSUN’s Pub Sports Grill, there is one popular option among students — a household name known as Matador Red. This Red Ale is a crafted drink locally brewed in the San Fernando Valley. Situated in the neighborhood of Canoga Park, founders Derrick and Bryan Olson discovered the perfect spot to open 8one8 Brewing.

The Olson cousins found themselves in a pioneering scene during the early 2010s as local breweries began opening.

“We went to a local craft beer bar in the Valley where we were introduced to European styles of beer,” Bryan explained. “We went to this bar that had a lot of stuff from Germany and Belgium. Stuff I had never tried before and it piqued my interest.”

Aware of the spark igniting in the Valley, the Olson cousins saw the potential of opening their own brewery at home like other places they visited, including San Diego and Los Angeles, where they saw breweries all over the place.

“There’s this bar in Winnetka that’s starting to get these people into craft beers but there were no breweries. We thought, let’s bring the culture of brewing to the Valley,” Bryan said.

As the Olson cousins entered competitions sharing their product, they noticed a demand from locals which led them to export their first signature crafts, including Valley Girl (a Blonde Ale) and Matador Red.

As a CSUN alumnus, Derrick’s background in manufacturing systems engineering prepared him to gather and maintain the proper equipment needed to make a typical batch (310 gallons worth of beer). Their team operates from a single room filled with fermenters where the brewing process occurs. Compared to industry giants, their operating size is rather small. A 10-minute car ride away, the San Fernando Valley is home to a huge Budweiser brewery that runs along Roscoe Boulevard and Haskell Avenue next to Interstate 405. However, for a microbrewery like 8one8, this small operating size is an advantage.

“Breweries function off of investment into equipment. On a normal brew day everyone is running measurements, turning valves, checking timers,” Derrick explained as he gave a tour of the brewing room adjacent to their tasting room, which opened in 2015. “We’re able to be more flexible and brew two kinds of beers at the same time. (Industry giants operate at a larger scale) where everything is automated. The deck is more of a manufacturing setting. People are wearing rigging hardware, fixing the equipment and keeping the facility running. You go up on the room where the brewers are, they’re all looking at the computers overseeing the process.”

This greatly differs from Derrick and Bryan’s brewing that involves a more traditional hands-on process and can then provide various tastes of beer for locals.

One of those locals is Kate Rosen, who has been a regular for a year. A recent graduate from CSUN with a bachelor’s degree in art, Rosen found a job in her hometown and has opted to visit more local breweries like 8one8. While in the tasting room, she was editing a few photographs she took during the brewery’s four year anniversary celebration, which was held at the brewery.

“It’s a way for me to give back to them since they’ve been so good to me,” she said. “And I’m able to put my major into practice.”

The Olson cousins are also for the idea of giving back to their community, recently pairing with 11:11, a creative collective, to include artwork on the walls of their tasting room, donated money to the McGroarty Arts Center in Sunland, worked with university campuses and farmers to properly dispose of waste, and even obtained materials made by businesses within the San Fernando Valley. This has a positive impact by contributing to the local economy.

Rosen was editing while enjoying a taster-sized glass of a Matador Red when she noticed a familiar face, Doug Lerma, sitting just a few feet away.

“I see you’re rocking your CSUN gear,” she said, pointing out Lerma’s gray hat adorned with the university’s black and red logo.

“I was visiting my daughter today,” Lerma replied, while laughing. “She just needed money for some books.”

Lerma grew up in Canoga Park and his daughter recently began her first semester at CSUN. He works in the Hollywood area where he’s frequented a few bars. When he heard of 8one8, he was proud to visit a brewery within his hometown.

Interactions between locals are something that both Derrick and Bryan knew would occur as it is typical of brewery spaces. To that, Derrick added, “The idea of there being a community hub is not new, it is in the Valley. Ours has an influence from European beer gardens. Every town has its four or five breweries with crafts you can only have in that place.”

Breweries like MacLeod Ale Brewing Co. (Van Nuys), San Fernando Brewing Co. (San Fernando) and Tarantula Hill Brewing Co. (Thousand Oaks), among others, all create a unique experience for locals like Rosen and Lerma while driving non-locals to the valley, too.

While these breweries are in competition with each other, business-wise, they also support each other by brewing together and maintaining a friendship.

“We feel the more of us small guys versus one Anheuser-Busch is better for everybody,” Bryan said. “We come out with different styles, and different environments, but the same people can enjoy them all.”