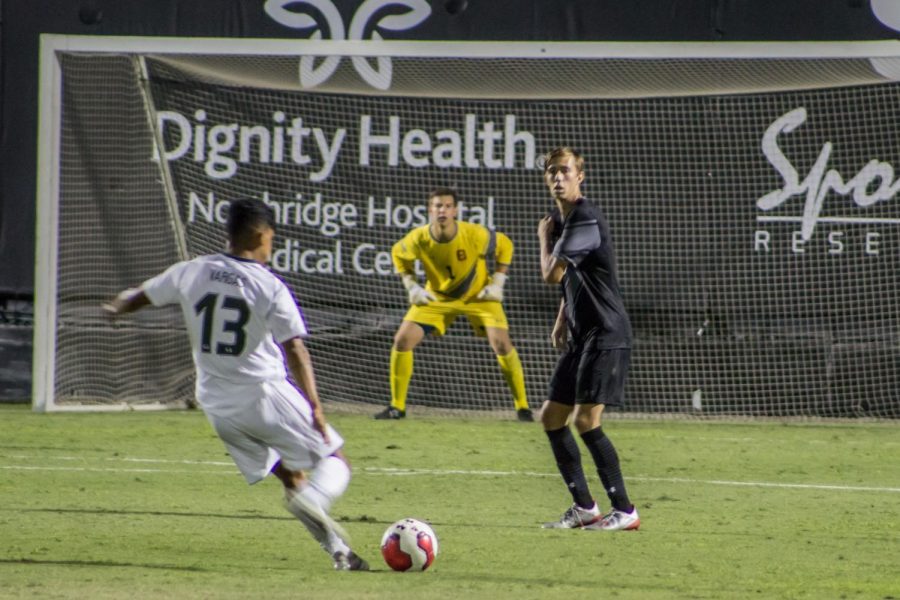 The Matadors drew their home opener 2-2 against the Utah Valley Wolverines in a back-and-forth affair decided by a matter of inches.

After a strong showing at the Wolstein Classic in Ohio, the Matadors strolled into their home opener with all kinds of momentum against the Wolverines. But a misplaced penalty kick in the 108th minute kept the Matadors from maintaining their perfect record.

“It’s a tough affair,” said head coach Terry Davila, who is in the midst of his 21st season at the position. “They’re a solid soccer team, with probably one of the best nines in the country. It’s an honor to play against them.”

Despite the Matadors controlling the ball for a majority of the game’s infant stages, the Wolverines would draw first blood in the 16th minute when senior midfielder Alec Felix headed home a deflection off of a counter attack.

CSUN would have difficulties driving the ball through the middle of the field in the ensuing minutes. That was until junior forward Daniel Trejo, the reigning Big West Offensive Player of the Week, received a pass down the middle from senior forward Johnny Rodriguez in the 25th minute and drove it into the back of the net from five yards out, his third goal in the first three games of the year.

“I was able to get a clear shot to go,” Trejo said. “I had an open shot with my left and didn’t think at all, just took it.”

With the score knotted up at one, each squad would take turns counter attacking up and down the pitch. A screamer off the right foot of Utah Valley forward Blake Frischknecht from outside the box nearly untied the score in the 39th minute, but it sailed a foot over the crossbar.

Shortly thereafter in the 44th minute, a hard slide tackle involving CSUN senior defender Alex Lara and a Utah Valley player in front of the Matador bench led to a scuffle that would delay the game for three minutes, with coaches and players from both sides being forced to intervene in order to restore the tranquility of the match. Utah Valley midfielder Becca Rice received a red card, causing the Wolverines to complete the match down a player.

Despite this, an undermanned Utah Valley was able to capitalize on a defensive lapse from the Matadors in the 53rd minute, when Wolverine midfielder Zach Maas controlled a deflection from a CSUN defender and glanced a shot off the fingertips of redshirt junior keeper Paul Lewis and into the net.

“We turned the ball over in our defensive third,” Davila said. “You can’t lose the ball in zone one. They capitalized on our mistake to make it 2-1.”

It would take eight minutes for CSUN to make up for this mistake. A corner kick in the 61st minute from redshirt senior Julio Rubio would find graduate defenseman Ehi Isibor, who slotted a pass to Rodriguez in front of the goal, to sink the equalizer.

“My role in that play is to go back post,” said Rodriguez, who was involved in both of the Matadors’ goals, including his third score of the year. “Luckily the ball found me in front of goal and I just tried to get my laces through it.”

The Matadors outshot the 10-man Wolverines 13-4 in the second half, but the score remained tied at the end of regulation.

A relatively uneventful first overtime was characterized by the seesawing action that was on display throughout the first 90 minutes of game time, and the score remained tied at two.

The second overtime featured a prime opportunity for the Matadors to walk out victorious in the form of a 108th minute penalty kick. Wolverine midfielder Alec Felix slid too hard into a defender, giving Trejo the opportunity at a game winner.

Trejo’s penalty kick ricocheted off the crossbar, effectively ending the game in a 2-2 tie.

“I’m proud that (we) were always high in energy and the effort was always there,” Trejo said. “We played well, there were a few things we could have done better, but that’s soccer.”

CSUN outshot Utah Valley 23-13 throughout the match, including a 9-5 advantage in shots on goal. Wolverine keeper Joseph Wheelwright made seven saves en route to the first tie of the year for both squads.

“I feel like we were the better team,” Rodriguez said. “I thought it was a good game. Both teams fought hard, but sometimes the better team doesn’t always win.”

The Matadors will look to get their first home win of the season against the University of San Francisco Dons on Sunday at 6 p.m.