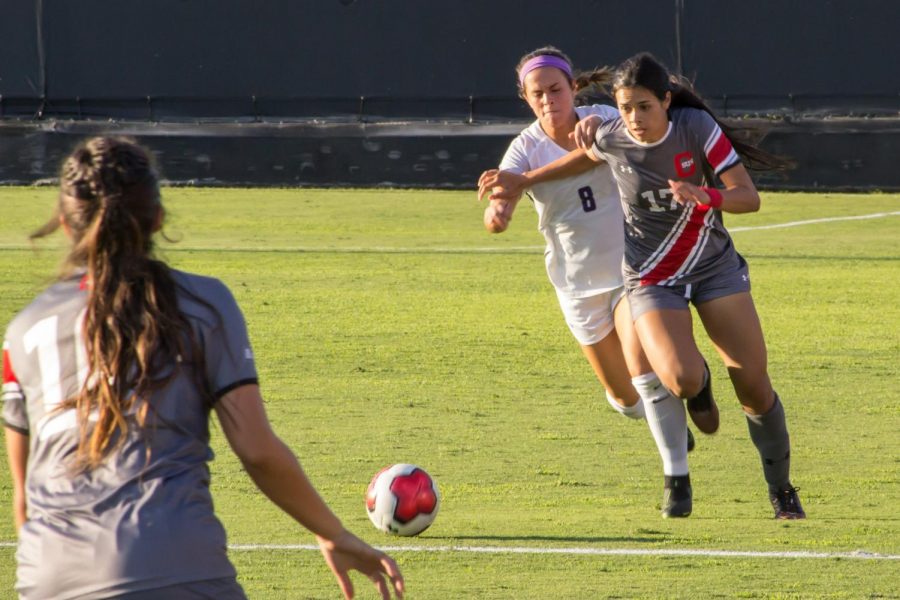 The women’s soccer team (3-1-1) started off their first home game of the season against the Kansas State Wildcats on Friday, with a 0-0 draw at Matador Soccer Field.

Arteaga led the way with a total of five shots, with two coming in the first five minutes of the second half that helped set the aggressive tone for CSUN, where they owned a slight advantage of shots over the Wildcats 6-5.

In the 56th minute, a nice feed inside the 18-yard box by freshman midfielder Stephanie Gallardo to Arteaga, who beat the last line of defense and got past the Wildcats goalkeeper Emma Malsy. The play developed into an Arteaga shot on an open goal that was saved by a last second slide by a Wildcat defender.

Another scoring opportunity came for the Matadors in the 79th minute, where freshman midfielder Kacie Garrity sent in a cross inside the box from the left wing. Fitzsimmons made a play on the ball in front of the goal and Wildcats Malsy was there to make the save, stopping what could’ve been a game-winning goal for CSUN late in the game.

The Matadors were outshot by the Wildcats 18-16 throughout the match, while CSUN held a slight edge in shots on goal 7-6 but weren’t able to capitalize on the opportunities.

“Teams need to find ways to get the ball in the back of the net and we had some opportunities tonight,” said head coach Keith West, who is now in his 14th season with the Matadors. “I think we weren’t calm enough in front of the goal and we have to have a little more oomph to us by the goal.”

West believed the team did well in their home opener of the season against the Wildcats.

“We were really good at moments,” West said. “I thought we did exactly what we were worked on at practice and we executed pretty well.”

Sophomore goalkeeper Amanda Delgado led the way for the Matadors with six saves in the match, including three pivotal saves coming in extra time that kept the Wildcats from scoring. Delgado earned her first shutout of the season in her third start and now owns four career shutouts in 15 total starts for the Matadors.

“Honestly, that team came at us hard. We definitely got our chances and we just need to finish them,” Delgado said. “They attacked on the counters and they got their shots off but luckily we survived those.”

One of the pivotal plays of the game for the Matadors came in the 96th minute, when Delgado had a big diving save on a header inside the box, along with another save by Delgado in the 108th minute that kept CSUN’s chances alive.

“I think it definitely pumped them up cause after that there was like two more crosses allowed in the last 13 minutes that were left,” Delgado said. “But yeah, saves always pump the team up.”

Delgado believes with how well the defensive line played, there are still certain things they need to improve on looking forward to the next matchup on Sunday.

“I think if they correct their mistakes and not let any crosses off and protecting the middle of the box and clearing the ball better,” Delgado said. “I think we have a good chance against Eastern Washington.”

West believes with the game going into double overtime that the team needs to rest before going into their next match up.

“I’m proud of this team. They battled hard and we got an unbelievable spirit about us,” West said. “I love each and everyone one of them … they are pretty special.”

The Matadors will be looking to secure their first home win of the season on Sunday to face Eastern Washington (2-2-1) at Matador Soccer Field at 1 p.m.