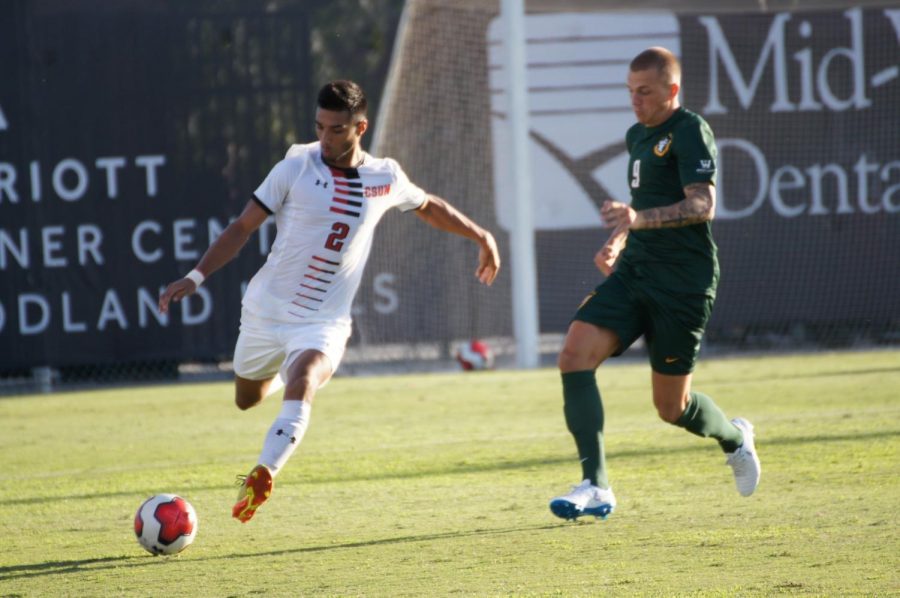 Senior Alex Lara notched his first goal of the season off an assist from graduate student Ehi Isibor on Sept. 8. This goal was also Lara's first goal since his sophomore season in 2017. Photo credit: Bryanna Winner

The Matadors cruised to a 6-0 win against the University of San Francisco Dons on Sunday, marking their first home victory of the year.

Led by a brace from junior midfielder Kris Fourcand, the Matadors (3-0-1) ran through a young Dons (0-3) squad that featured four true freshman in their starting 11.

“I’m here for the team,” said Fourcand, a transfer from Loyola Marymount University, who came into the game as a substitute. “(Senior forward Johnny Rodriguez) has four goals in four games and that’s awesome. We push each other. Every time I see him score, I get hungry. I’m sure every time he sees me score he gets hungry too.”

Fourcand had plenty of motivation at the beginning of the game, since Rodriguez wasted no time heading home his fourth goal of the year in the sixth minute to give CSUN a 1-0 lead. Sophomore midfielder Omar Grey drove the ball through the middle of the field before passing it to redshirt junior midfielder Brenden Hildreth on his left, who found Rodriguez on a cross in front of goal.

Minutes later, Rodriguez nearly had his second score of the game when a free kick from redshirt senior Julio Rubio found him streaking towards the goal, but he was called offside.

CSUN dominated possession throughout the rest of the first half, but the Dons still had their share of shots on goal. Redshirt junior goalkeeper Paul Lewis squandered these opportunities with two saves, including a diving stop of a USF free kick in the 30th minute.

The Matadors, who played an overtime match on Friday, looked refreshed coming out of halftime, since it took less than four minutes for senior defender Alex Lara to head a throw-in from graduate defender Ehi Isibor into the back of the net. The goal was Lara’s first since his sophomore season in 2017 and it gave CSUN a 2-0 lead.

Eight minutes later, a Rubio corner kick was deflected by Lara to the front of the net where junior forward Daniel Trejo guided home his fourth goal of the year to make it 3-0 Matadors. The four scores on the year for both Trejo and Rodriguez place them in a tie for the most goals in the Big West Conference.

It was Fourcand’s turn to shine in the 60th minute when he converted a Rubio corner kick into his first goal in a Matador uniform. CSUN held a commanding 4-0 lead with three of the scores coming off of set pieces.

“We’ve got a lot of weapons on set pieces,” said head coach Terry Davila. “You can’t just guard one guy. We have good free kick takers, we got good people on crosses and we got great dribblers who are going to cause a lot of fouls. Set pieces are a huge part of the game for us.”

With his second assist of the game, Rubio extended his season assist total to five, the most in the Big West Conference.

CSUN’s fifth goal in the 74th minute featured a roommate connection, when freshman forward Samuel Salter corralled a USF turnover and slotted it to Fourcand, who completed his brace.

“My roommate, it’s his birthday and he told me he was going to give me an assist,” Fourcand said. “He got the ball and led me through. When I was one-on-one I knew what to do. I put it away.”

Two minutes later, junior midfielder Esteban Camacho scored his first of the year on another CSUN set piece — a free kick outside the box from redshirt sophomore Maximillian Yanakaev, driving the Matadors’ lead even further to 6-0.

The six goals are tied for the third most by a CSUN squad at the Division 1 level, but the defense was the main source of pride from the home squad.

“It’s our first shutout,” Davila said. “If you’re going to be a big time team, you need to shut them out. The defense sets up the offense. It’s a team defensive game, from the forwards, to the midfielders, to the defenders, to the goalkeeper.”

The Matadors had a momentum-building game against a Dons squad that is yet to score through their first three games of the year. CSUN outshot USF 22-8 including 10-2 in shots on goal.

Stiffer competition awaits later this week against the no. 11 Washington Huskies. To continue their impressive start to the year, CSUN must continue to improve.

“We didn’t play beautiful,” Davila said, “but we played tough and hard. We got to clean up our ball movement and our technique a little bit, but we played strong and tough.”

A big week looms ahead for the Matadors as the Huskies come to the CSUN Soccer Field on Thursday, Sept. 12 at 7 p.m., followed by the no. 13 UCLA Bruins on Sunday, Sept. 15.