Period Poverty: The Sisterhood of the Traveling Tampons 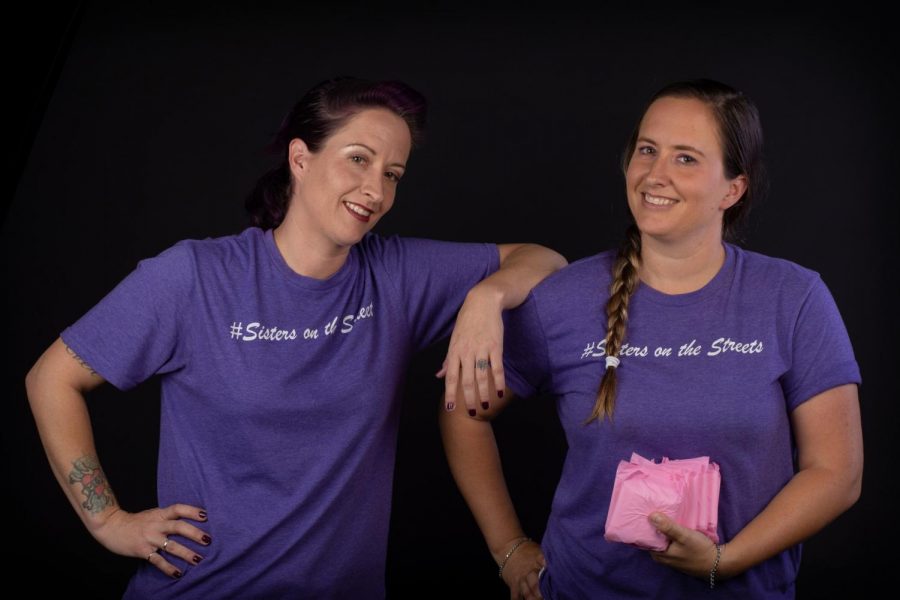 Laura Rathbone was sitting at a sign-in table at a winter shelter promoting voter registration for Measure H when she noticed a homeless woman asking for another pair of pants because she bled through her only pair.

The woman was arguing with the department of mental health, saying, “I used to be a good person, I used to have a house and a job and a life and now I’m trying to get a pair of pants without blood on them.”

From then on, Laura noticed the lack of feminine hygiene available in bathrooms for women.

“If toilet paper and paper towels are free why can’t feminine hygiene be free?” became her mentality. Eventually Laura stood outside a Walmart with a cardboard box asking for feminine hygiene donations for homeless women. By the end of the day she had only received a small box, not enough to meet the needs of women on the street.

Laura and her twin sister, Alycia, began Sisters on the Streets, a community-based organization that volunteers at homeless shelters, creates outreach programs for the homeless and leads the Hygiene Campaign.

The Hygiene Campaign has donated hygiene packs to women on the streets, in motels and other non-stable living situations and garnered support through middle school and high schoolers, as they started donation drives for feminine hygiene.

The Rathbone sisters are an example of how women across the U.S. are tackling period poverty. According to Laura, “Period poverty is when feminine hygiene is not accessible to those who cannot afford it or gain access to it.”

The average woman experiences 456 periods over 38 years, which equals to 6.25 years of menstruation, according to a report released by the Bringing Resources to Aid Women’s Shelter from the University of the District of Columbia. On average a woman uses four tampons a day, 20 per cycle and 240 per year and a woman will spend up to $1,773.33 in her lifetime on feminine hygiene, the report states.

The Rathbone sisters know that menstruation is still seen as a taboo. Shira Brown from the CSUN Women’s Resource Center feels that misogyny is a big reason that people feel so grossed out by menstruation.

“People are so grossed out by menstrual blood, but they watch gory films,” said Brown. “If men menstruated, then policies around menstruation would be different.”

Currently, 35 states in the U.S. tax feminine hygiene products, according to an article by The New York Times. Recently, California has passed Assembly Bill 31 and Senate Bill 92 to exempt sales tax on menstrual products, however the bills only last for two years, from January 2020 to January 2022, according to the Tax Free Period Organization.

“If you can’t afford food how can you afford tampons?” said Brown.

The Rathbone sisters and Brown agree that there needs to be an open conversation about menstruation. For Laura and Alycia, the conversation should start in middle school because that is when most girls start their first period.

As Brown states, menstruation is an issue that only menstruating people think about. But walking into any girl’s bathroom on CSUN’s campus, there are never any hygiene products available.

“Every middle school, high school, even colleges, I’ve never really seen pads and tampons in the facility unless you go to the nurse’s office,” Laura said. “And to me, toilet paper and paper towels are supplied in bathrooms, so should feminine hygiene.”

At times Laura and her sister have noticed how certain male-dominated outreach groups feel uncomfortable handing out pads and tampons or don’t understand how long a cycle lasts to supply enough. Through first-hand experience, she notices how that affects the self-confidence of homeless women reaching out for pads at homeless shelters.

There are many names that have fought against period poverty. Jennifer Weiss-Wolf recently wrote on Newsweek: “Forcing immigrant girls to bleed through their underwear is cruel, degrading and dangerous,” regarding the lack of feminine hygiene in the detention centers.

Alycia puts the period poverty issue through an interesting perspective.