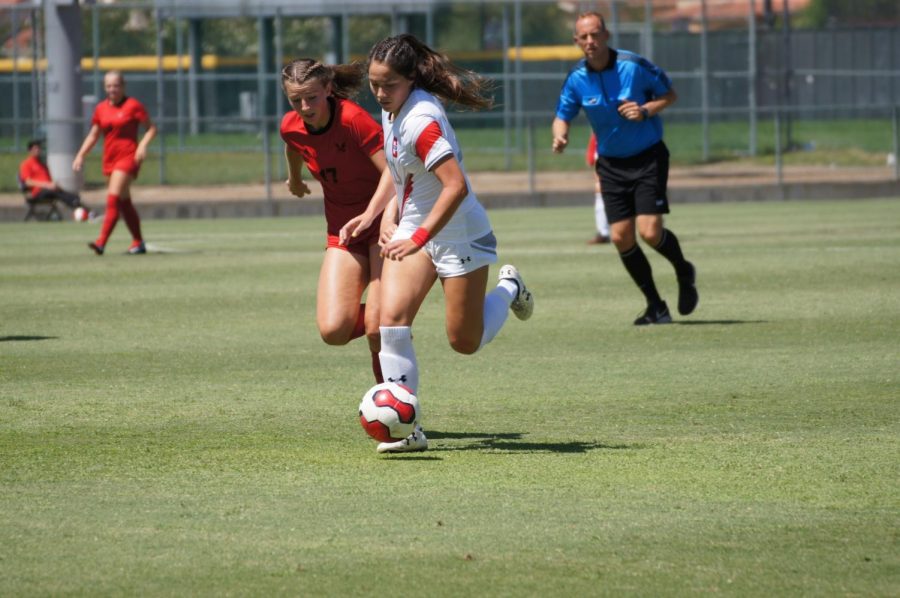 Freshman midfielder Cindy Arteaga moves the ball towards the Eagles' goal in an effort to score the second goal of the match on Sept. 8. Arteaga had six shots during the match, two of which were on goal. Photo credit: Bryanna Winner

The women’s soccer team (4-1-1) came away with a 1-0 victory against Eastern Washington University on Sunday in a close match up, their first victory of the season at Matador Soccer Field.

Junior forward Bethany Fitzsimmons scored her second goal of the season on a penalty kick for the Matadors early on in the third minute of play, which proved to be the difference maker in a close match up over the Eagles.

“I think it is definitely an ego boost for us in the beginning,” Fitzsimmons said, on the importance of scoring early on in the match. “For us to be able to hold them off for this long just proves we are here and ready for the season to get serious and that we can perform under a bunch of pressure.”

Freshman forward Cindy Arteaga led the Matadors with a total of six shots for the game and drew the penalty on Eagles junior defender Grace Klinkenberg.

Arteaga had more opportunities early on to add to the lead for the Matadors with two shots in the first 10 minutes of the game, with one coming at the ninth minute mark, which was saved by the Eagles goalkeeper Kelsee Winston.

CSUN had the slight advantage over Eastern Washington in shots (10-7) and also in shots on target category (4-2). The Matadors shot five times in each half and did not allow the Eagles to have a single shot on target, on just the two shots they had in the first half.

Sophomore goalkeeper Amanda Delgado recorded two saves in the victory, both of them in the second half on five shots by the Eagles. Delgado earned a shutout win for the Matadors, her second of the season and CSUN’s third, who have had a shutout in most of their wins this season.

According to West, the Matadors had to do a better job of taking care of the ball coming into the match up against the Eagles.

In a close match up from start to finish, the Matadors found themselves in a physical battle with 29 fouls called, with CSUN being whistled for 20 of them. The majority of the fouls coming in the second half went against the Matadors 15-2, where they were under the attacking pressure of the Eagles. Sophomore defender Kassandra Mathews for the Matadors received a yellow card for a hard foul in the 70th minute.

“I think we were very good on handling the adversity that they were giving us and it tested us as a group,” Fitzsimmons said. “We were struggling a bit but we came together and really relied on one another as sisters and not just teammates. That is what we are focusing on this year a lot more than being just a team.”

West believes that the team handled the pressure that Eastern Washington was playing with throughout the second half.

“I think we battled really hard in the 18 (yard box). I feel like we took care of the 18 (yard box) extremely well and we dodged a couple bullets,” West said. “They came after us, that is a hell of a team over there and they got an unbelievable spirit about themselves.”

For the Matadors’ next match up against CSU Bakersfield, West believes the team has several things to continue to improve upon.

“Just keep doing what we are doing and keeping the ball, making the right decisions, not turning the ball over carelessly and defending better,” West said. “There is so much about the game that we have to keep getting better at … you know it is about confidence and we have to keep preparing for conference.”

The Matadors will be looking to defend their home field on Friday, Sept. 13 against CSU Bakersfield (3-3), who are undefeated on the road this season at Matador Soccer Field at 7 p.m.