A Closer Look at Homelessness in LA Through Photojournalism 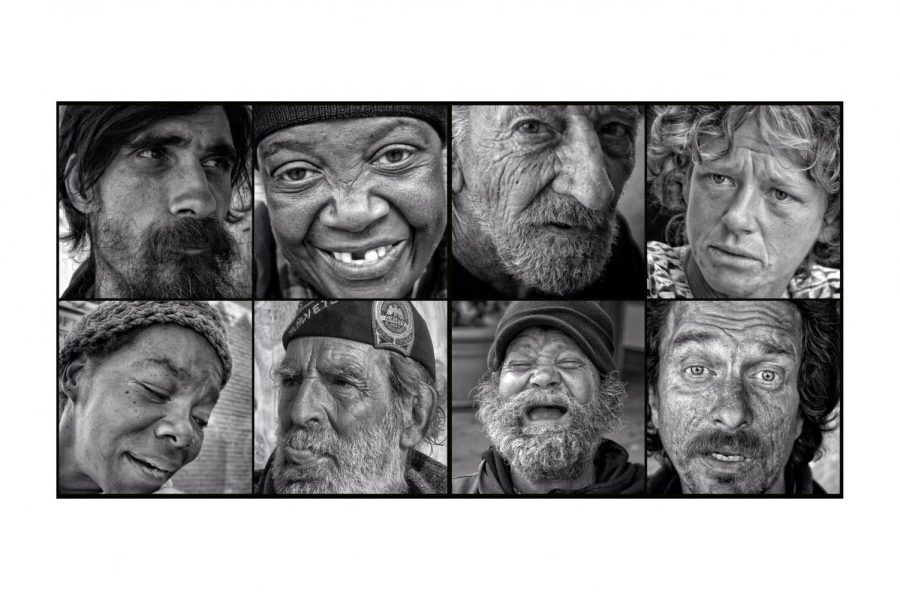 Montage of a variation of what homelessness actually looks like. Another way of destigmatizing what homelessness has been said to look like vs. what the reality is. People on the streets are just that: people. Photo courtesy of David Blumenkrantz

Aside from the glitz and glamour that Los Angeles is typically associated with, there’s a reality many Angelenos choose to ignore, a side of the city that isn’t thought about because it isn’t perfectly manufactured.

CSUN’s very own David Blumenkrantz, a professor in the journalism department who focuses on photojournalism, has his eyes set on normalizing and destigmatizing the stereotypes that degrade the homelessness population every day through One of Us, a project that brings awareness to the homeless situation in LA. With a camera lens, Blumenkrantz wants to tell the stories of the impoverished on the streets.

“I started the One of Us project here at CSUN in 2016 through a grant,” Blumenkrantz said. “I had a student worker and we went out to four different locations throughout the San Fernando Valley where we knew that there were mobile showers.”

He continued to talk about how this project was meant for people to shed light on their own situation as individuals.

“We wanted to show them as human beings first, and allow them to speak for themselves. The rationale is that there’s a lot of photographs of people struggling,” Blumenkrantz said. “My concern is that it hasn’t helped. The homeless problem has gotten worse over the years. It has some effect. It sensitizes people, and you can’t stop photographing it. You can’t stop reporting it. It’s like war: you can’t stop looking at it. It’s not like you will stop homelessness. Nevertheless, it is frustrating to see the stereotypes that are put out into the media about homelessness: that they’re all drug addicts, that they’re all mentally ill, that they’re lazy, or that they want to be here.”

One of Us was exhibited at the Museum of Social Justice, located in the basement of the Los Angeles Methodist Church. Its run was from May 24, 2018, to Jan. 27, 2019. As the description says on their website: “One of Us recognizes the dignity and individuality of people who are economically, socially, and psychologically disenfranchised. The exhibition presents portraits and personal stories of people who wished their faces to be seen and their voices to be heard. The images and stories created collaboratively with their subjects, challenge us to recognize them as more than a faceless societal burden known as the homeless.”

In Blumenkrantz’s own words, the project aimed to accurately represent homelessness from the perspective of those experiencing it directly, “Rather than to look at them like bugs under a microscope and take pictures of them that are humiliating and degrading, let them speak for themselves and let them become part of the dialogue.”

This year, He is having a series of workshops for One of Us with the participation of homeless people, who will be taking pictures of their surroundings so they can tell their story.

“In this case, I’ll be having people photograph things that they miss or can’t have anymore,” Blumenkrantz said. “Take them on a field trip, for example, to a really rich neighborhood, and ask them, ‘How do you see that world?’ Because, traditionally, most documentary photography of marginalized populations is normally people coming from an upper economic structure into a lower economic structure. It’s normally the media being elitist and going into a lower economic area.”

However, He isn’t the only one using the camera lens to depict the homelessness in their gritty reality. The Los Angeles Times has a 12-part video series with a total of an hour and 11 minutes running time on YouTube. They, with a journalist and cameraman in tow, try to get the real-life stories of people living on the streets and what their experiences have been like.

The people that they come across in the documentary completely shatter certain stereotypes. One person interviewed was Louis Tse, a Ph.D. student at UCLA, living in his car because he thought it would only be temporary. He doesn’t tell his colleagues because he doesn’t want to be pitied, and he doesn’t tell his parents because they would be too worried about him.

They also interviewed a bartender named Rory who said that most of the employees at his job were living in their cars. His reality and theirs was that it was normal to be living in their car because economically they weren’t able to have enough money to pay rent for an apartment and afford to feed themselves.

Homelessness and the arts may seem like they never intersect, but art can be used to shed light on a community that doesn’t get an accurate portrayal. The homeless are constantly exploited on a daily basis because of the stigmas that are put on them by the very society that is supposed to help them.

Blumenkrantz has a stake in the fight to end homelessness using photography and art as a medium of activism.

“If I was single and had no responsibilities,” Blumenkrantz passionately stated, “I would probably be attending a different (neighborhood council board) meeting every night. I’d be working on a full investigation on what’s going on with the homeless situation because there is a war going on.”