Helping the Homeless with Sandwiches 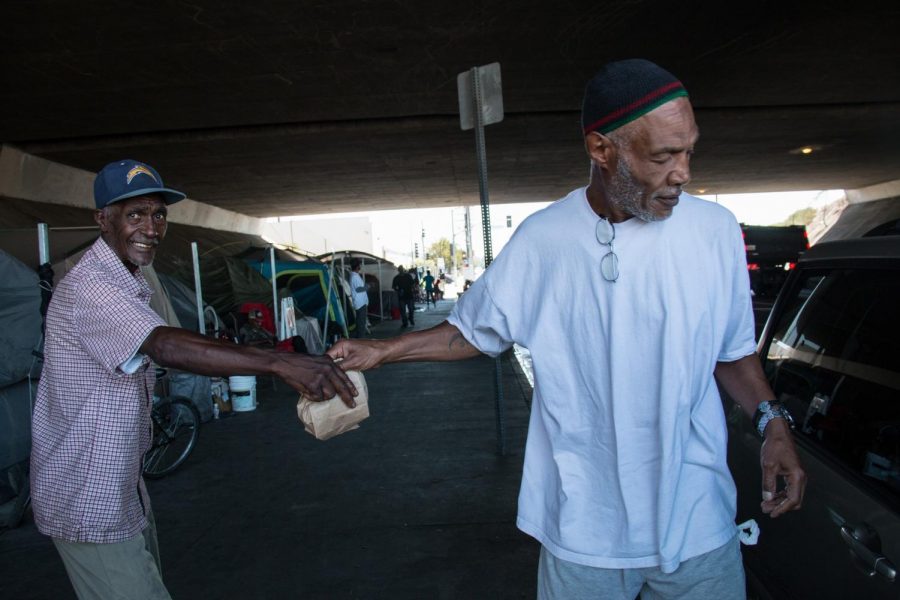 The homeless population in Los Angeles is something that can be seen on nearly any street, and while some are upset about the problem, Amar Billoo and his mosque, Masjid Imam Bukhari, are taking action.

“The homelessness crisis has gotten so bad I just had to do something,” said Billoo, a 28-year-old Muslim and a financial consultant. Every week, Billoo takes time out of his schedule to give back to the local community.

Billoo and a small group of volunteers prepare 325 lunches weekly in a dimly-lit kitchen inside the North Hills mosque. Each lunch consists of a sandwich with mayonnaise, turkey, lettuce, and American cheese, a bag of chips, fruit snacks and a bottle of water. The group gets together and prepare the sandwiches every Friday, a sacred day of worship for Muslims where they congregate for prayers. The food preparation takes nearly three hours. The process is similar to an assembly line, where slices of bread are laid across three tables while ingredients are added to each slice one by one.

Members of the mosque have been funding the lunches as a way to give back to their community, but at times the mosque did not provide enough money.

“We’ve paid for the lunches out of our own pocket at times when we couldn’t get the funds,” Billoo said, as he was spreading mayonnaise on wheat bread. “We never like to go backwards, so if we made 325 sandwiches this week, we will make at least 325 sandwiches next week.”

On Saturday, the group gets together again to pack the lunches into traditional brown lunch bags. This group consists of men, as well as young boys and girls who take a break from learning the Quran to bag lunches.

“I don’t feel good when I see people out on the streets with nothing, especially when I have food,” said Imtiaz Ahmed, a 12-year-old middle school student, explaining his motivation for giving up time on a Saturday. Imtiaz packs the lunches with his brother, Ishtiyaque,16, and dad, Mushtaque, 54, every Saturday.

Once the minivan is loaded full of sandwich bags and cases of bottled water, Billoo and Ali Muhammad, 63, hit the streets to pass out the lunches. Pulling up to a homeless camp under a freeway overpass in Pacoima, the two get out and yell, “Food and water”!

Heads slowly peek out from the tents as Billoo and Muhammad begin handing out the lunches and water.

“These guys are great, every little bit from the community helps,” said Duane Pierfax, a 62-year-old homeless man.

Once loaded back up in the minivan, Billoo discussed the struggles of going out into the heat week in and week out to serve the community.

“It’s a little depressing sometimes trying to help people who don’t want to help themselves, or seeing people who society has just forgotten about,” Billoo said, as he did a U-turn to pass out a lunch to a person he previously missed hiding under a tarp from the hot California sun. “But every week I realize how fortunate I am.”

Going to places beyond the streets, Billoo and Muhammad go the distance by finding people camped out under water runoff ditches escaping the heat. Billoo made it clear that he was here to help the community regardless of their situation or religious beliefs.

“It does not matter if you’re Muslim or not, all that matters is that you care about humanity,” Billoo said.

If you are interested in donating to their cause their GoFundMe page can be found here: https://www.gofundme.com/f/amar039s-ibmf-houseless-feeding-program?utm_source=customer&utm_medium=copy_link&utm_campaign=p_cp+share-sheet