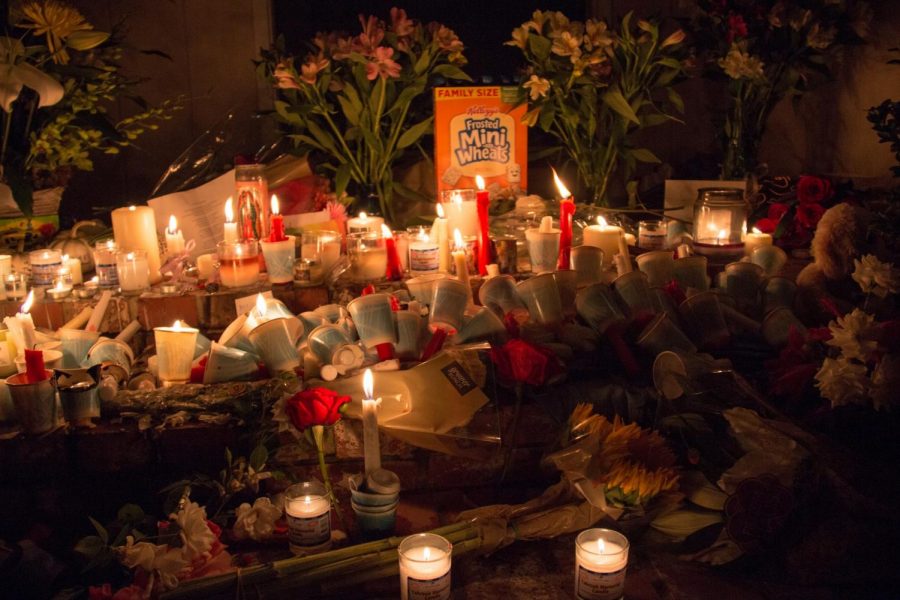 Candles and flowers flood the front steps of the Lertzman home. People gathered outside of the home and left notes, flowers, candles and other personal items. Photo credit: Logan Bik

A Los Angeles deputy city attorney killed himself after fatally shooting his son, a CSUN fraternity member, and wife Wednesday morning at their home five minutes away from CSUN, authorities confirmed Wednesday evening.

Eric Lertzman’s daughter recalled seeing him holding a gun before she escaped through a bathroom window as her father tried to shoot her.

“It was totally incomprehensible to her how this could happen,” Cindy Stern, sister-in-law of Lertzman, told the Daily News. “She heard a bunch of shots and was able to make it from her bedroom to the powder room to escape out the window.”

Lertzman’s daughter ran to a neighbor’s home across the street and the two approached the Lertzman home.

“I went with her to the door, and I knocked on the door, yelled—nothing,” Greg Demos, the neighbor, told local television news station ABC7. “We went to the back. She had locked the doors and left. She said my mom and my brother are still inside. We pummeled on the door, yelled for her dad, yelled her mother’s name and brother’s name. No answer. And that’s when we called the police.”

Authorities said Lertzman, 60, shot his wife in their bedroom before attempting to shoot his daughter. As she fled, Lertzman shot and killed his son, Michael, and returned to his master bedroom where he then killed himself, according to the LAPD.

“The motive behind this tragic murder-suicide is still under investigation, but investigators believe the recent loss of a loved one and ongoing health issues played a significant role,” the LAPD said in a news release.

According to Stern, Lertzman had surgery two weeks ago and was about to have another.

The LA Times reported that Lertzman had also lost his mother recently, according to his son Michael’s Instagram page and her obituary.

“This is a horrible tragedy,” said Los Angeles City Attorney Mike Feuer in a statement on Wednesday. “As we search for answers to how this could happen, we mourn the victims and envelop those left behind with our love during this time of unbearable loss. Of course, we will provide members of our City Attorney Family with needed counseling and support.”

According to the LAPD’s Devonshire Division, the incident was immediately contained and did not pose a threat to the community.

Police said there were no other suspects, and the investigation is ongoing.

A vigil was hosted last night at the Alpha Epsilon Pi fraternity house for Michael, where a rabbi led friends and family into prayers and his closest friends followed with moving speeches.

Josh Sigal, one of Michael’s best friends, described Michael as “compassionate, carefree, and most of all, a goofball.”

Sigal shared memories of their high school friend group called Dr. Dreidel, the name chosen for their connection with their Jewish faith. He recalled what Michael’s sister had said at their grandmother’s funeral earlier this week, that the grandmother will always be with them in spirit.

Jacob Freedman, 20, a pledge brother, described Michael as the most genuine person he has ever met.

“Every time he walked into a room his smile and his laugh just emanate, that’s the one thing I remembered about him,” Freedman said.

Sigal continued to thank the community and the fraternity for showing up. They have been at Michael’s house since yesterday, mourning together and also cheering each other up, according to Sigal.

The fraternity led all of Michael’s supporters down the street to his house, where people lined up in front of his door, taking a moment to send prayers and lay down a candle in his memory. The fraternity then chanted “Gold and Blue” in support of Michael where many brothers, old and new, put their arms around each other and filled the night with their chant.

After taking a pause, Sigal mentioned that the group Dr. Dreidel will last an eternity, including Michael.

Editor’s note Sept. : Michael Lertzman was not a CSUN student but was a member of the CSUN fraternity Alpha Epsilon Pi.