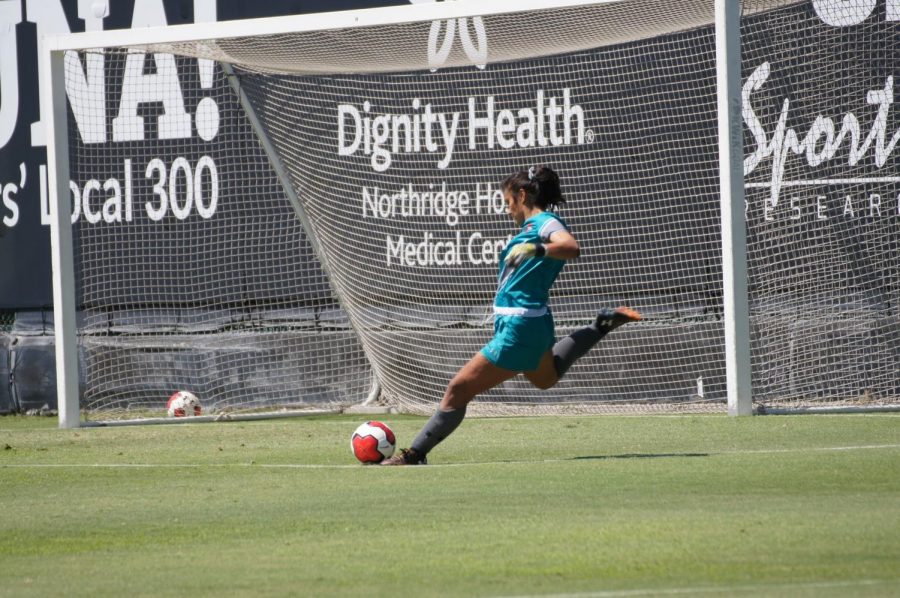 The women’s soccer team (4-1-2) came away with a 1-1 draw in a close match up against the CSU Bakersfield Roadrunners on Friday, remaining undefeated this season at Matador Soccer Field.

The Matadors played in their second double overtime match up at home this season, both resulting in draws.

The Matadors found themselves playing from behind early on, giving up a goal in the fourth minute of play initiated by a Roadrunners corner kick. Sophomore goalkeeper Amanda Delgado caught and lost possession of the ball inside the box which was cleaned up by freshman midfielder Chelsea Duran, giving the Roadrunners an early 1-0 lead.

The equalizing goal for the Matadors came in the 32nd minute by a corner kick from freshman midfielder Stephanie Gallardo that was headed into the back of the net by a Roadrunner defender resulting in an own goal.

The Matadors were outshot throughout the game by the Roadrunners 12-7 and also trailed in the shots on goal department 6-5. Freshman forward Cindy Arteaga led the way for the Matadors with two shots, including a scoring opportunity in the first half that was saved by Roadrunner goalkeeper Andrea Neves. Arteaga leads the team with 18 total shots in the season and is still searching for her first career goal.

Delgado continues her hot start in the goal for CSUN, recording five saves and allowing only the lone goal early on in the match. Delgado also leads the Matadors with a total of 18 saves in her fifth start of the season, resulting in a 2-1-2 record.

Delgado had multiple big plays throughout the game to hold the Roadrunners off with a big save early on. At the 18th minute mark, she rebounded a shot that ricocheted off the crossbar by Duran. Delgado also recorded two big saves in double overtime coming in the 93rd and 107th minute marks, to help the Matadors come away with a draw.

With 17 total fouls called in the game, CSUN was whistled for 10 of them along with sophomore midfielder Ashley Cruz receiving a yellow card for a hard foul in the 37th minute. The Matadors held a slight advantage of corner kicks 4-3 over the Roadrunners and also controlled possession for 54% of the match.

“I thought the first 30 minutes can be forgotten,” said head coach Keith West. “But the next 80 minutes I thought we played hard and did what we do.”

West believed that the team wasn’t able to execute the plan going into today’s match up, but were able to make adjustments and play hard, especially the players that came off the bench.

“Did we execute the plan today? No. Did we play hard and have a good fight in us in the last 80 minutes? Yeah I think we did,” West said. “I think we only had about two or three starters on for the rest of the game. Those kids that came off the bench changed the game for us. Luckily for us, we had a pretty good team today and when our starters come off, we have people that can come in and make a difference.”

Coming out of the halftime break, the Matadors seemed to be more of the aggressors controlling the possession and outshot the Roadrunners 4-2 in the second half. According to West, the change of play wasn’t due to any halftime adjustments, but it was accredited to the aggressive play from the group of seven that were substituted in towards the end of the first half.

“We wanted to be aggressive from the start,” West said. “In the 15th minute I had six subs up there and for 15 minutes I couldn’t get them on the field. So we could’ve changed the game earlier but that is just how the game is sometimes.”

For the Matadors’ next match up against San Diego, West believes that having a better mindset and knowing their roles are some of the things the team needs to improve upon.

“I think just having a better mindset coming into the game, understanding your role, understanding what we are working on and what we are doing,” West said. “That is the biggest thing. Whoever is starting or coming off the bench needs to know their role and we have to be able to execute.”

The Matadors will be looking to remain undefeated at home on Sunday, in a match up against the University of San Diego Toreros (4-2) at Matador Soccer Field at 1 p.m.