With Gun Violence on the Rise, Latino Communities Fear for Their Safety 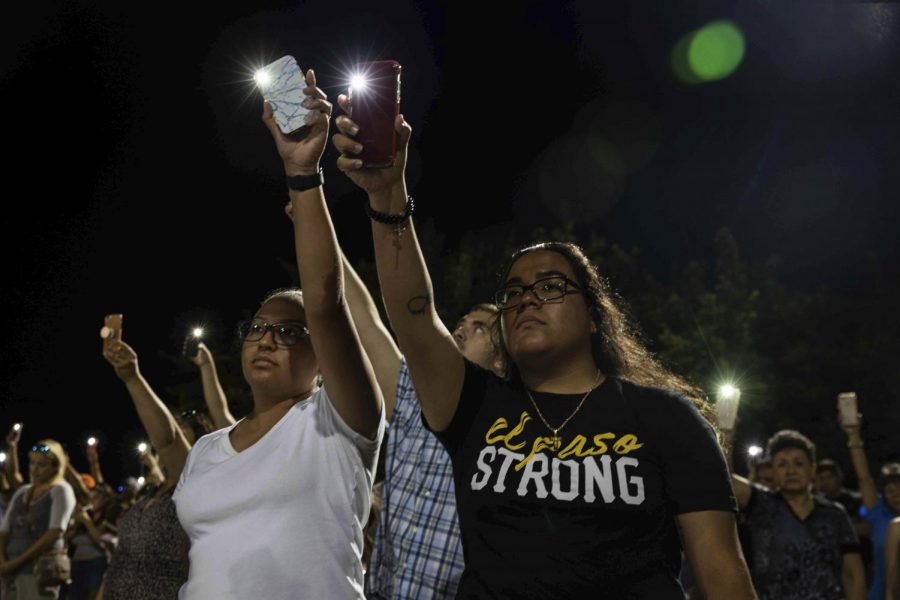 Karina Cardoso and Linda Nevarez hold their cellphone flashlights up during an Aug. 4 vigil in El Paso for the victims of the previous day's shooting at a Walmart. Gov. Greg Abbott will convene on Thursday morning the first meeting of the Texas Safety Commission, which Abbott created in the wake of the El Paso shooting. [LOLA GOMEZ / AMERICAN-STATESMAN]

Since the El Paso mass shooting in August, Latinos have been worried for their safety as they become more and more of a target of gun violence.

Part of the Latino population in America is made up of undocumented immigrants. They fled from violence, death threats and poverty from countries such as Mexico, El Salvador and other Latin American countries. They migrated to the U.S. seeking opportunities and the opportunity to start a new life.

Once they step foot onto American soil, they struggle to assimilate into the American culture. Having to learn a new language and different customs aren’t the only survival tools they need to learn; they now have to make sure a bullet doesn’t hit them or their loved ones every time they go shopping or watch a movie.

“It’s been going on a lot lately where everywhere we go it’s not safe anymore. This world is not safe,” said criminal justice and Chicano/a studies major Alejandra Tzoc.

According to POLITICO Magazine, 21-year-old Patrick Crusius drove 10 hours from Dallas to El Paso and randomly shot people inside a Walmart store with the intent “to kill Mexicans, Latinos and immigrants.” He ended up killing 22 people. The victims included a 15-year-old named Javier Rodriguez and a young couple leaving behind three children.

Before Crusius carried out the mass shooting, he posted his manifesto on 8chan, an imageboard website where anyone can post anything anonymously. According to a CNET article, it has become a platform for white nationalists and supremacists to post racist comments and mass shooting plans. Since the El Paso shooting, Jim Watkins, owner of 8chan, has shut it down temporarily.

Jose Amaro, a Chicano/a studies lecturer, said the motive for these shootings are because white nationalists don’t want to lose their power.

Univision news anchor Jorge Ramos had a one-on-one conversation with white supremacist Jared Taylor in the documentary, “Hate Rising.” Ramos showed Taylor a census chart explaining that by 2044, “white non-Hispanics will become a minority. Is that what you’re afraid of?” Taylor viewed this statement as a threat towards the declining white population.

Amaro explained that since the beginning of the Trump administration, negative issues have been occurring. He believes that the media has helped to raise awareness of these issues.

“I think the media shows that it has increased. There are polls and data showing that racism and violent actions have been increasing since the beginning of the administration,” Amaro said. “It’s being highlighted a lot more.”