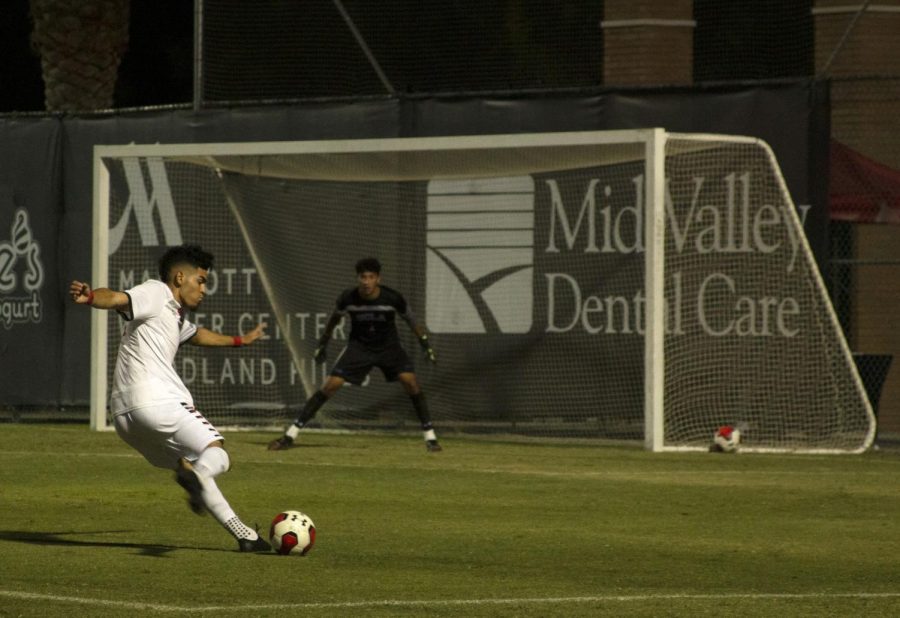 Senior forward Johnny Rodriguez strikes the ball towards goal. He had three shots and one assist in the match. Photo credit: Serena Christie

The men’s soccer team suffered its first loss of the season Sunday night in a high-scoring 4-2 affair against the UCLA Bruins.

Junior forwards Milan Iloski for UCLA and Daniel Trejo for CSUN both recorded braces, but the advantage in opportunities for the Bruins proved to be the difference.

“I like things to be straight up,” said head coach Terry Davila of his Matadors playing their second game in four days while the Bruins played their first game of the week. “I like the way we fought against a great team that’s well coached, with great players. I’d like to go straight up with them. We play on Thursday, they play on Thursday.”

UCLA dominated the ball early on while CSUN anxiously distributed it throughout the midfield, leading to abbreviated possessions.

Unable to penetrate, the Bruins took advantage of a missed clearance that nicked the head and went behind graduate defender Ehi Isibor in the 14th minute. Iloski recovered the ball and dribbled 10 yards to knock home the opening goal from five out.

Time of possession evened out in the ensuing minutes, with each squad exchanging opportunities at goal.

A turnover in the middle of the field by the Bruins in the 29th minute required a sound counterattack by the Matadors. That is exactly what sophomore midfielder Wolfgang Prentice supplied as he found senior forward Johnny Rodriguez outside the box where he executed a nifty lead pass to a streaking Trejo, who delivered the equalizer.

Another fine bit of work between Prentice and Rodriguez followed minutes later when they drove down the left side of the field and delivered a cross to Trejo in front of the net, but his shot sliced off-target.

The Matador defense struggled to contain Iloski throughout the first half, as he outshot the entire CSUN team 5-3, and the trend would continue coming out of the break.

In the 55th minute, UCLA sophomore midfielder Riley Ferch found Iloski in the box between CSUN defenders. Iloski made his way past redshirt junior keeper Paul Lewis and chipped in his second of the game to give the Bruins a 2-1 lead.

The score was his seventh of the year, which leads the Pac-12.

UCLA set into a rhythm on offense in the 64th minute, as Iloski played a two-man game with sophomore midfielder Cody Sundquist at the top of the box. Iloski led Sundquist from the marker to the right side near the goal line where Sundquist scored a tough shot from an odd angle to provide the Bruins with insurance.

Down 3-1, the Matadors showed a sense of urgency on offense and began to dominate possession. CSUN primarily utilized crosses from the sides of the field to generate offense and in the 73rd minute, a Prentice cross found Trejo from five yards out. Trejo played it off his chest and hammered in his second score of the game to bring the Matadors to within one.

Trejo’s seventh goal of the season leads the Big West conference and is his fifth consecutive game with a score.

“I want to be successful,” Trejo said. “I’m going to continue to do whatever I can do to help my team and coaches.”

CSUN continued to attack in the game’s final minutes, but could not get anything past UCLA sophomore goalkeeper Justin Garces, who recorded three saves on the night before being stretchered off the field with an apparent neck injury in the 85th minute.

The Bruins would seal the game on a goal from junior midfielder Eric Iloski, who converted a rebound off of a saved shot in the 84th minute to put UCLA up for good, 4-2.

The Matadors ended their big week against two Pac-12 powers with one win and one loss.

While focusing solely on results can drive people mad, it is hard to ignore what the benefits of beating two ranked teams in a week could do, especially in less than ideal circumstances.

“(UCLA head coach Ryan Jorden) is one of the best coaches in the nation,” Davila said. “You give him a week, he’s going to be prepared for us. That team was fresh and ready to go. We kind of were on our back foot the whole night.”

CSUN will have five days to prepare for their next match when they travel to take on the University of Portland Pilots on Friday, Sept. 20 at 7 p.m.

They return home on Sunday, Sept. 22 to take on the Loyola Marymount University Lions at 6 p.m. at Matador Soccer Field.