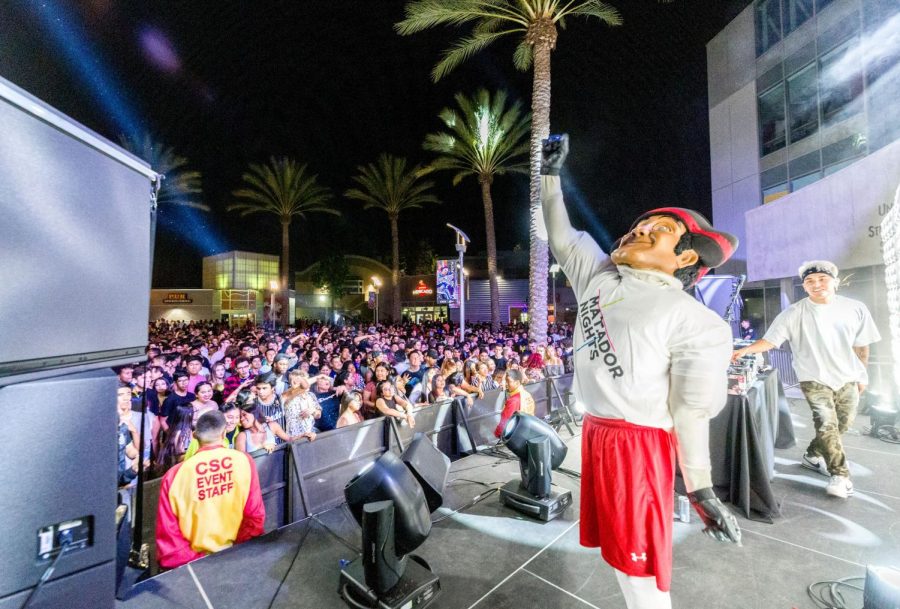 On spooky Friday the 13th, with the moon shining ever so bright, CSUN had its annual welcoming celebration for students at Matador Nights. The University Student Union becomes the ultimate party central decked out with rides, hangout spots, free food, drinks and goodies, as well as multiple places for photo ops for an Instagram-worthy picture making partygoers more than eager to join in on the fun.

The theme of the night was neon. The USU organizers handed out glow sticks while the attractions were 80’s themed. It’s neo-futuristic retro aesthetic decorated the Plaza del Sol.

Even before they let anybody in, there was an early crowd eager to start the party. Once the event started, students dashed at the chance of being first in any line. People jumped about in the bounce obstacle course and the bounce slide, while others stood in line to get spray-on tattoos at another station.

The DJs of the night were DJ Dyln and DJ Malski. DJ Dyln’s set featured rap remixed with house music, while DJ Malski put on jams that everybody could dance to later in the night. However, DJ Medina Chicanx, who was in the Grand Salon, had the most interesting and lively set out of the entire night. The Grand Salon had a VR attraction as well as a caricature artist, but DJ Medina Chicanx was the highlight of the room. Playing hits like “Glamorous” by Fergie, “I Like the Way You Move” by Outkast, and “Toxic” by Britney Spears, they had an eclectic set that could easily attract a diverse crowd.

DJ Medina Chicanx, Danielle Medina, a 22-year-old CSUN student double majoring in communication studies and Chicanx studies. Medina is a valley-based DJ who has regularly DJed events for CSUN as well as done popular events like ToolboxLA. When asked why they got into music, Medina said, “I have always been really into the music scene growing up. As a kid, my folks would always take me to live shows and we’d hit up a record store at least once a month showing me the throwbacks to new music, thus developing my taste. I have always been infatuated by the energy live shows give off. I like to feed off the energy of the audience. The way it unites folks together to just let loose, sing along or dance.”

Being a DJ mainly based in the valley, they appreciate all of the artistry of locals.

“DJing in the valley has been a lot of fun. It is ultimately where I have always performed,” they said. “The community of artists out here are very supportive and love to collaborate. I feel they are all about uplifting one another and giving opportunities to local artists.”

Kimberly Tellez, a 22-year-old bio major at CSUN, is a close friend of Medina, whom Tellez came to support.

“I came to Matador Nights for my friend, I thought it would be fun to support,” she said. “This is my second time at Matador Nights. The first time I went was when I was a freshman, and I liked it better the first time. There were more things to do back then.”

In terms of helping the DJ pick their songs, Kimberly said she couldn’t take credit.

“The DJ and I just have similar music tastes so it was very easy for me to like their song choices,” Tellez said. She mentioned how Medina had some nervousness anticipating for the event that night, but the DJ had no problem putting on a flawless set and entertain the crowd.

Medina had nothing but positive things to say about their experience at Matador Nights.

“Matador Nights was a lot of fun. I performed in a lounge area with creative visuals behind me, which allowed me to experiment with the music genres. There was another artist in the space, Quincy Ray, doing portraits for folks. Those waiting for him were the ones jamming and wanting a place to relax,” they said. “The experience by far was one of my favorites. They allowed me to perform any songs with no limitations. I navigated through different genres and eras with the audience and had lots of fun dancing with some folks.”

At the end of it all, they were really appreciative of every opportunity that comes their way.

“Even if there’s three folks dancing to the music, as long as I’m doing what I love and able to bring that happiness of music to other folks that’s all that counts,” they said. “Music is a universal language to me. Everyone interprets songs and lyrics so differently. Just jam out and have fun.”