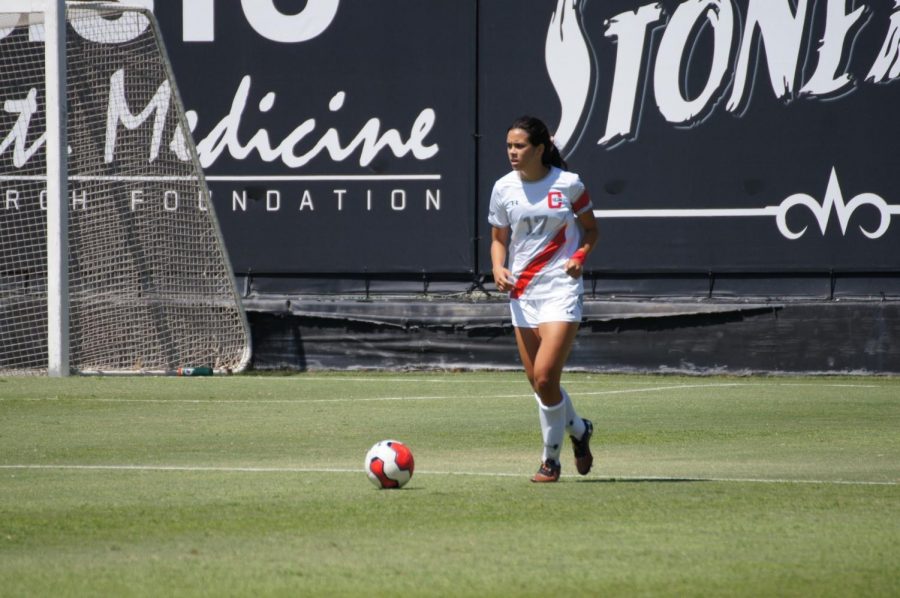 Senior defender Amanda Martin bringing the ball up against Eastern Washington on Sept. 8. Martin scored the only goal of the game against San Diego on Sunday. Photo credit: Bryanna Winner

The women’s soccer team (5-1-2) concluded their four-game homestand with a 1-0 victory against the San Diego Toreros on Sunday, remaining undefeated at home this season at Matador Soccer Field.

The Matadors, who were coming off a double overtime draw on Friday, were able to capitalize in the second half with a game-winning penalty.

Senior defender Amanda Martin knocked in the game winning penalty kick in the 66th minute, recording her first career goal for the Matadors.

CSUN outshot San Diego 8-7 throughout the match up and also trailed in the shots on goal department 4-1. Sophomore forward Alexis White led the way for the Matadors with three total shots for the game. Freshman forward Cindy Arteaga drew the penalty just inside the 18 yard box, which changed the tide for CSUN. The Matadors’ lone shot on goal was the penalty kick.

Several scoring opportunities came in the first half for the Matadors, with a shot missing wide by freshman midfielder Kimberly Anderson in the 39th minute of play. Sophomore midfielder Ashley Cruz had a scoring opportunity late in the first half along with White, who had two shots with one missing wide and one being blocked in the 41st and 44th minute of play.

While the Matadors struggled with penalty kicks last season, West wanted to make sure he was able to decide who was going to take the penalty for the team, calling on their team captain Martin.

Sophomore goalkeeper Amanda Delgado has continued her hot start to the season, recording four saves for the Matadors and tallying her third shutout of the season. In her sixth start in goal for the Matadors, Delgado holds a 3-1-2 record.

The Matadors controlled possession for the majority of the game over the Toreros with 53% and 59% being attributed to control of the ball in the center midfield.

The Matadors have remained undefeated at home this season in four games, resulting in a 2-0-2 record so far. The team has scored three goals and only allowed one goal in that span. West believes that winning games at home is important because having a home field advantage is huge.

“I mean when you are at home … You have to protect your house and you just have to do what you have to do to get the results,” West said.

CSUN has been able to grind out games during their homestand and come away with some wins and draws in close competitive match ups overcoming some offensive struggles. West believes that the team’s energy and effort has been the difference in being successful this season compared to last year’s squad.

“Last year was a tough year for us results-wise and I just think that the energy of last year’s team wasn’t the best,” West said. “I have coached a couple of unbelievable teams with some great energy and were Big West Tournament champs. This group has that type of energy and that is what I’m most excited about. Their youthfulness, closeness and togetherness is just a joy and so much fun to be around. If we weren’t winning as much as we are now I’d still be having fun because it is a pretty special group this year.”

West believes that the Matadors still have some things to continue improving upon as they head into a two-game road trip.

“I just think they need to work on their self discipline and just to continue understanding their roles,” West said. “We got a young group and we have some ups and downs and the more steadier we can get to become more consistent with our game plan. I think we are going to be right where we need to be when conference starts.”

The Matadors are traveling to Arizona for a pair of games starting off with the (6-2) Arizona State Sun Devils on Friday and concluding their road trip against the (1-6-1) Grand Canyon Lopes on Sunday.