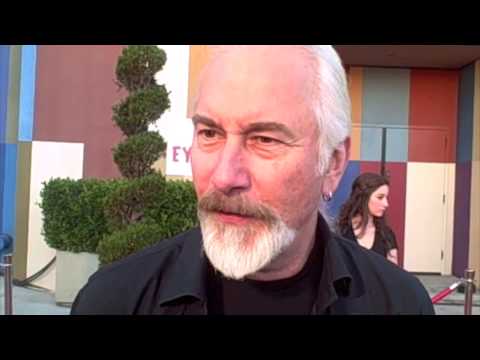 Celebrities such as Tobin Bell, Corey Feldman, Rob Zombie and Rick Baker lined the red carpet to accept their awards at the Chiller-Eyegore Awards.

Baker, a six-time Academy Award-winning special makeup effects artist who received the Jack Pierce lifetime achievement award said, “this place (Universal Studios) made me do what I wanted to do. This place made Frankenstein and Dracula.”

Baker expressed that despite the fact that he had a difficult time breaking into the entertainment industry, he never gave up on his dreams of doing makeup.
“I landed a movie to work on, people liked my work and it eventually snowballed from there,” said Baker.

Another recipient of the Chiller-Eyegore Award was actor Tobin Bell. Bell is famous for playing the infamous Jigsaw on the horror franchise “Saw”. He was awarded the Best Film Series Villain.

When asked which “Saw” movie was his personal favorite, Bell said part two because his character was beginning to develop more in the story.

Bell also added that, “the ‘Saw’ maze is a pretty amazing experience”. Bell’s actual voice as the character Jigsaw is played throughout the maze.

Among the other winners this year was director Rob Zombie who won Master of Mayhem of the Year, director Drew Daywalt who won the Scarygood Competition award for his movie, “Bedfellows” and actor Noah Segan who was awarded Best Villain

A live band added on to the classy feel of the evening by playing jazzy musical tunes and entertained the crowd while guests and celebrities alike mingled.

After the awards ceremony, guests and media were allowed into the theme park, which had been transformed into a foggy and creepy backdrop of a horror movie.

Zombies, chainsaw-wielding butchers, freaks and pig-faced monsters lurked in the shadows and chased unsuspecting guests in the “scare zones”.

Mazes such as the all-new “Saw: Game Over” features all the terrifying trap scenes from the “Saw” movies.

The theme park also offers mazes such as “Halloween: The Life and Crimes of Michael Myers”, “My Bloody Valentine: Be Mine 4 Ever” and “Chucky’s Funhouse”.

The also all-new “Terror Tram: Live or Die” features scenes from the movies “Saw”, “My Bloody Valentine”, “Psycho” and “Halloween”.

According to Universal Studios, “the ‘Terror Tram’ combines a ride aboard the Universal signature trams with a terrifying walk-through experience through the sets and specially designed gauntlets created on the studio’s historic backlot.”

Popular rides that will also be open during the event will include “Bill & Ted’s Excellent Halloween Adventure”, “Jurassic Park-In The Dark”, “Revenge of the Mummy-The Ride” and “The Simpsons Ride”.