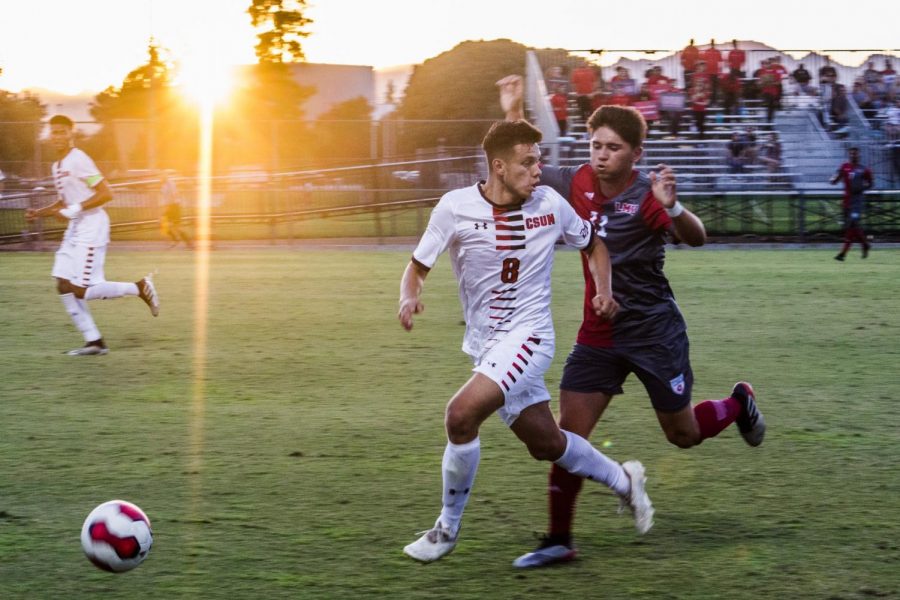 Junior midfielder Giovanni Aguilar tries to keep the defenseman away from the ball. Ahuilar had two shots during the game. Photo credit: Tim Strong

Men’s soccer suffered their third defeat in as many contests on Sunday night, falling 2-0 to the Loyola Marymount University Lions.

After a hot start, CSUN (4-3-1) hoped to gain back lost momentum against an LMU squad (5-1-1) that had allowed two goals through their first five games.

The stingy Lions defense would prevail and prolong the Matadors’ rough patch, whose late surge was denied at every corner.

“We had an identity crisis at the start with who we are as a team,” said head coach Terry Davila. “We played very slow on and off the ball. LMU deserves the win.”

A defensive first half began with neither side having much success getting the ball to their forwards. The Matadors controlled possession, but the tall Lion defenders controlled any pass that was slightly off target from Matador midfielders.

CSUN was able to break through a few times, including a breakaway in the 16th minute when junior forward Daniel Trejo displayed a nice bit of skill to get past two LMU defenders, but his shot from eight yards out went directly to the keeper.

An evenly-matched half saw its first score in the 34th minute on a beautiful shot from Lions junior midfielder Narciso Cervantes, who blasted a screamer from the right side of the field outside the box into the upper left corner of the net. Cervantes’ first goal of the year put LMU on top 1-0.

The momentum throughout the rest of the half shifted the Lions’ way and they would carry it through the break, as they controlled possession and registered several more shots on goal.

The 50th minute saw Cervantes cross a ball towards the middle where junior forward Duhaney Williams received it and dribbled around a fallen Matador defender before scoring LMU’s second of the game from five out.

Williams’ second goal of the year woke up the CSUN offense as they found some holes in the Lions’ defense to register a few shots on goal, but the LMU defense remained stout.

A counter attack in the 71st minute found senior forward Johnny Rodriguez and Trejo streaking up the middle, surrounded by Lion defenders. Trejo was able to get a shot off from inside the box that was saved by the keeper, and Rodriguez’s shot attempt off the rebound was deflected by the defenders.

“We didn’t have a lot of chances (to score), we had three good ones,” said Davila. “We tried to force tempo but we weren’t clinical or precise around the goal.”

The close calls would continue throughout the rest of the game for the Matador offense as they outshot the Lions 19-11, but tied 5-5 in shots on goal. Thanks to five fantastic saves by Lions redshirt junior goalkeeper Alfredo Cortez, LMU would go on to hand CSUN their third consecutive loss.

The Matadors were the second highest scoring team in the nation heading into their home match against UCLA a few weeks ago, averaging 3.6 goals per game. They have been held to a single goal per game in the three games since, including their first shutout of the year against LMU.

The Matadors will hope to end their skid when they travel to Omaha, Nebraska to take on the University of Omaha Mavericks on Friday. They return home to Matador Soccer Field on Saturday, Oct. 5 to take on the Santa Clara University Broncos at 7 p.m.