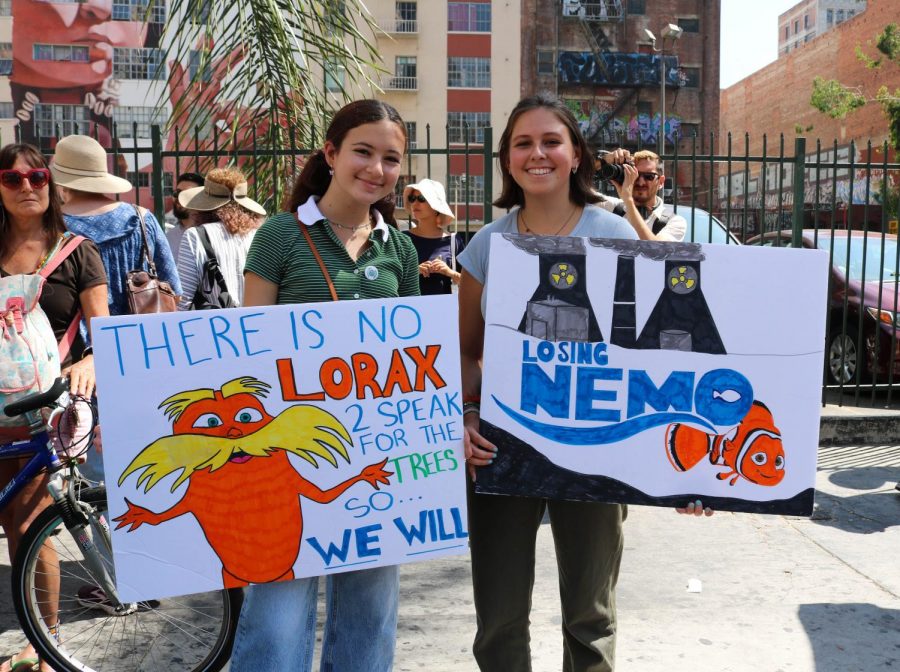 “It would be stupid if teachers don’t value what’s happening in the real world,” Madi Kcase said, holding a hand-drawn sign of the Lorax. Her friend, Bianca Richmond, holds a sign showing Nemo from the popular Pixar film as a way to express their support for the Global Climate Strike on Sept. 20 in Downtown LA. Photo credit: Ivan Salinas

On Sept. 20, the first day of the Global Climate Strike, students from all over LA County skipped class and took to the streets of Downtown LA, urging world leaders to implement environmental changes during the United Nations Climate Action Summit. Messages like “There is no Planet B” or “The climate is changing, why can’t we?” could be read on many picket signs held by the protesters.

However, some protesters expressed their concerns for the environment by drawing fictional characters from movies and television on their signs. This comedic touch served as a momentary relief for protesters, yet it still conveys an underlying, thought-provoking message.

One of the most notable characters seen on signs was Dr. Seuss’ character the Lorax. This children’s book icon is also representative of a larger environmental issue as an activist figure that “speaks for the trees” and confronts an industrialist villain, the Once-ler, who causes environmental destruction by cutting down Truffula trees and therefore turning the forest into an uninhabitable wasteland. Seuss’ intentions for his book to grow an ecological consciousness in its audience is further explored in Dr. Matthew Teorey’s essay, “The Lorax and Wallace Stegner: Inspiring Children’s Activism.”

Teorey argues that “The Lorax” is based on Wallace Stegner’s theory that conservation equals survival, a concept illustrated in the children’s book. Teorey wrote: “The general public has ignored (Stegner’s) essay. Although other essays by Stegner are highly respected, they do not have ‘The Lorax’s’ wide appeal and timelessness.” Nevertheless, Seuss’ story has helped to disseminate the same theoretical message to the masses.

In “The Lorax,” the word “unless” is inscribed on a stump outside of the Once-ler’s home as a reminder of the negative impact of his factories, but to the audience, it is a call to action.

“‘Unless’ denotes despair and hope, revealing a choice of ecological paths — renewal or ruin,” Teorey wrote. Through storytelling, the complex ideas of scholars can be broken down for them to be more easily understood.

However, the attempt to create an ecological literacy among the masses can sometimes backfire as it did with Pixar’s “Finding Nemo.” National Geographic reported that the demand for clownfish tripled after the release of the film. Ironically, the film’s plot derives from a scuba diver taking Marlin’s son, Nemo, which leads him on an adventure across the ocean to rescue him. After the release of “Finding Dory,” many environmentalists urged movie-goers not to buy the regal blue tang fish as a pet.

Another of Pixar’s characters seen on a picket sign was “Wall-E.” This 2008 blockbuster tells the story of a robot left on a deserted planet earth that is devoid of any intelligent life, apart from a cockroach Wall-E befriends, after humans found a way to live in outer space. The movie imagines a scenario where the negligence of consumerism and the drive for profit leads to an uninhabitable planet.

These films have cautionary messages about the environment and are deeply relevant to an event like the Global Climate Strike, which drove individuals to make a change.

Other protesters had a more traditional message, like UCLA Professor Jeff Share, who showed his support with his sign that had a drawing of a decaying planet earth with the phrase “Time’s up.” That same phrase has had a meaning more associated with the movement against sexual assault sparked by Hollywood celebrities. Owen Lewincki, a protester at the strike, took the hashtag #MeToo as representative of mother earth protesting against the damage done to her.

Pop icons reveal some of the flaws in our society, including a desperate need for education on the environment that begins at home. Along with the sustainable methods to preserve an environmentally-friendly way of living, one should not ignore the media we consume, for it may be warning us of an unpleasant future.