History of Cultural Studies at CSUN 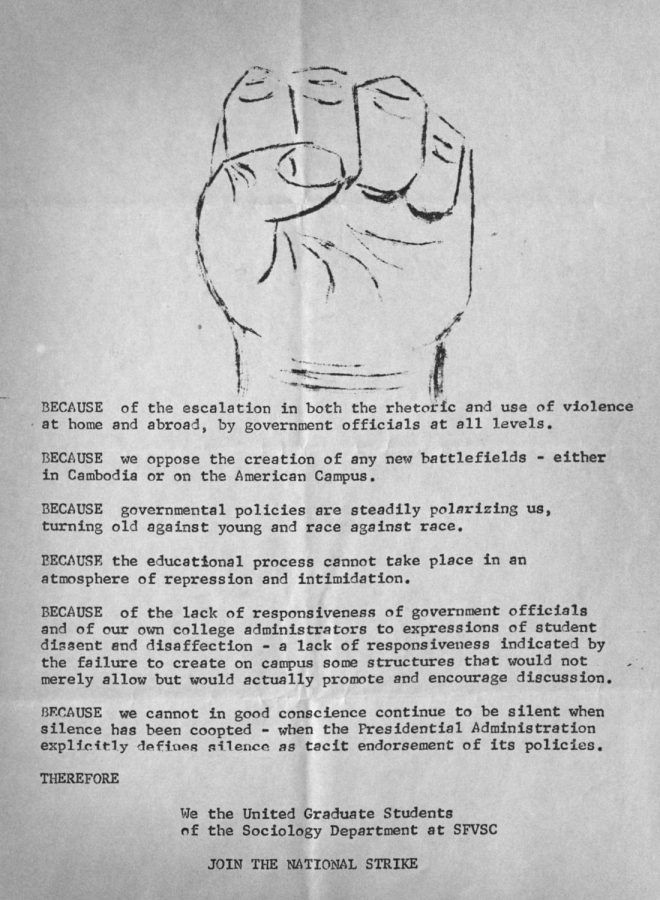 This year marks the 50th anniversary of the Africana and Chicana/o studies departments. Their beginning was marked by extreme activism from students and faculty, a police standoff and the resignation of two university presidents, resulting in the formation of the first cultural studies departments at CSUN.

On Nov. 4 1968, members of the Black Student Union, along with African American athletes, occupied Bayramian Hall demanding that university president Paul Blomgren address racism in the athletics department and the lack of minority enrollment and staffing. Days prior, football coach Don Markham had allegedly assaulted an African American student, George Boswell, according to Sundial reporting at the time. One-hundred and fifty LAPD officers were called to campus to end the demonstration.

After a tense four-hour standoff, Blomgren signed a document agreeing to the students’ demands and promising not to press charges for the incident. The next day, Blomgren recanted his statement, saying he was forced to sign. As a result, 24 students were arrested and charged with conspiracy, assault, burglary, kidnapping and false imprisonment.

At the time, about 100 African American and Latinx CSUN students attended what was a predominantly white university, while the country was in the heart of the Civil Rights Movement. Chicana/o and African American students rallied together, demanding increased minority enrollment and cultural studies courses be added to the university’s curriculum.

1969 was the year of change for CSUN, which was still called San Fernando Valley State College at that time. A state of emergency was declared on Jan. 9 by acting president Delmar Oviatt, stepping in for Blomgren who left for medical reasons unrelated to the demonstrations. Thousands of protesters, students and faculty alike, marched to the administration building demanding implementation of Africana and Chicana/o studies. Riot police were brought onto campus after fighting erupted. Over 260 students and eight faculty members were arrested for “unlawful assembly,” according to the LA Times.

Negotiations between administration and students held the next day resulted in the creation of Africana and Chicana/o studies programs that would become part of the curriculum the following semester. Oviatt resigned the following month.

“These courses we have today wouldn’t have happened if students didn’t rally in the 1960’s,” said Rodolfo Acuña, known as ‘the father of Chicana/o studies’ at CSUN. “The (San Fernando) Valley is a diverse community. How can you serve that community, whatever you choose to do, if you know the subjects but not the society?”

A year after the activism began, in the fall semester of 1969, students were able to take courses in the Africana and Chicana/o studies departments for the first time.

Since the protests and riots, CSUN has seen the first African American Associated Student president, William Watkins, in 1973; the first African American woman as president of CSUN, Brenda Wilson, in 1992; the opening of The Black House in 1992 and the re-opening in 2017; and the establishment of the DuBois-Hamer Institute for Academic Achievement.

Today, the Chicana/o studies department is one of the largest in the country, and offers a major, double-major, minor or masters program each semester with over 100 class sections to choose from. Nearly 40,000 students attend CSUN, with over 50% being Latino and nearly 5% being African American.

The culture of inclusivity at CSUN has spread beyond Chicana/o and Africana studies over the years. A decade later, an Asian American Studies course was proposed. Five years later, the first course was taught by Professor Laura Uba, which was considered part of the anthropology department.

“Asian Studies courses help (students) better understand why they feel sometimes excluded and it gives them concepts to be able to better comprehend their situations,” said Gina Masequesmay, former chair of the department and current professor. “It’s empowering.”

The former Academic Affairs Vice President (known today as Provost), Bob Suzuki, gathered with support from faculty and staff to develop the Asian American Studies department in 1990. Faculty at that time, which included Laura Uba and seven others, worked on expanding the curriculum, and then became the first faculty department.

Two years after the start of the department, a minor was developed and the “Asian House” was created to serve as a space for Asian American clubs and organizations. It was later renamed the Glenn Omatsu House in honor of Omastu’s work at the university.

It wasn’t until 1997 that a major and double major were offered from the department and began increasing in faculty and student numbers. Today, over 10% of CSUN students are Asian American.

“I always encourage students to take cultural studies courses, not just Asian studies but Africana and gender and women’s studies and others so that they have a better appreciation and different perspectives of the world,” Masequesmay said.