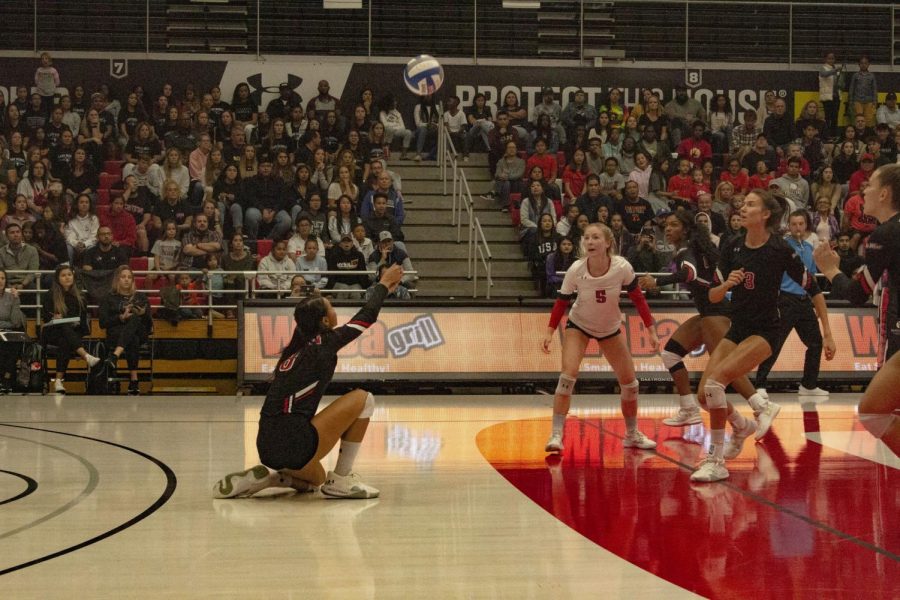 Senior setter Kamalu Makekau-Whittaker sets up the ball for her teammates during Saturday's game against Hawaii. Photo credit: Serena Christie

The women’s volleyball team lost their home opener this past Saturday in a close four-set match against the University of Hawaii Rainbow Wahine. Hawaii won the first set 25-17, but the remaining three sets were very close, with each one being decided by only two points.

“This was a tough and gritty match for CSUN volleyball, I’m very proud of the way they played,” head coach Jeff Stork said. “(Hawaii) is number 11 in the country and we held them to probably the lowest hitting percentage they’ve had all season.”

The Matadors came into this match with an overall record of 5-8. This was also the teams’ first home game of the season, as well as being only their second game of conference play, with their first being a 3-2 loss to UC Santa Barbara on Sept. 24.

Hawaii came into this match with an 11-1 record, their only loss coming from No. 2 Baylor University.

The first set was a get-to-know-you period for both teams. Freshman outside hitter Taylor Orshoff led the Matadors with three kills in the set. The two sides scored back and forth early on, but Hawaii began to pull away towards the middle of the set. Hawaii only gave up two lead changes and they comfortably won 25-17.

The second set was a much more competitive affair, with both teams scoring evenly throughout. The largest lead of the set came after a block from sophomore outside hitter Nicole Nevarez, making the score 20-17 in favor of CSUN. Hawaii was able to come back and tie the set at 23-23. However, a kill from Orshoff and an attack error from Hawaii gave CSUN the win at 25-23.

The third set was a critical one for both teams as the match was tied at one set apiece. Runs by both teams were the story of this set. The score was even early on, but Hawaii started to put the pressure on CSUN, going on an 8-2 run pushing the score to 11-7 in their favor. Hawaii pushed the lead to 19-14, causing Stork to use CSUN’s last timeout of the set.

Everything went the way of the Matadors coming out of the timeout. The team went on a 9-3 run behind kills from Orshoff and senior middle blocker Morgan Salone. Errors from Hawaii’s end and scoring from their side helped the Matadors take the lead at 23-22.

But even with the momentum on their side, Hawaii was able to score three straight points and took the set 25-23.

“I thought the teams were evenly matched and that’s the 11th ranked team in the country, that’s pretty darn good,” Stork said. “We didn’t allow them to do some things which I thought was great.”

A tough loss like that could kill a teams’ confidence, but the Matadors did not back down and stayed competitive throughout the fourth set. Nevarez and sophomore outside hitter Lexi McLeod led the Matadors offensively this set with three kills each.

This set came down to the wire as well, with CSUN leading late 23-22. However, two attack errors by CSUN gave Hawaii the lead 24-23 with the next score winning the game. The Matadors were able to hold back the match point with a kill from Orshoff, tying the set at 24-24. A kill from Hawaii and an attack error by CSUN gave Hawaii the set and the match with a final score of 3-1.

With this loss, CSUN now holds a 5-9 overall record and is still winless in Big West conference play with a 0-2 record.

Nevarez led the Matadors offensively with 13 kills. Following behind her were McLeod and Orshoff with 10 and eight kills respectively. Senior setter Kamalu Makekau-Whittaker notched a double-double with a team-leading 14 digs and a whopping 40 assists.

“I think we could have executed our offense a little more,” Nevarez said. “We had a couple of service errors on our side that we could have (improved on).”

The Matadors look to fix their mistakes as they prepare for their next Big West match up next week.

“Just making little tweaks and asking the players to keep their focus on the types of improvements we are asking them to make,” Stork said. “There is no magic to this, it’s just a lot of focus and concentration and a lot of dedication from these players.”

The Matadors will look for their first conference win of the season against the Long Beach State 49ers (3-11) at the Matadome on Oct. 5 at 7 p.m.