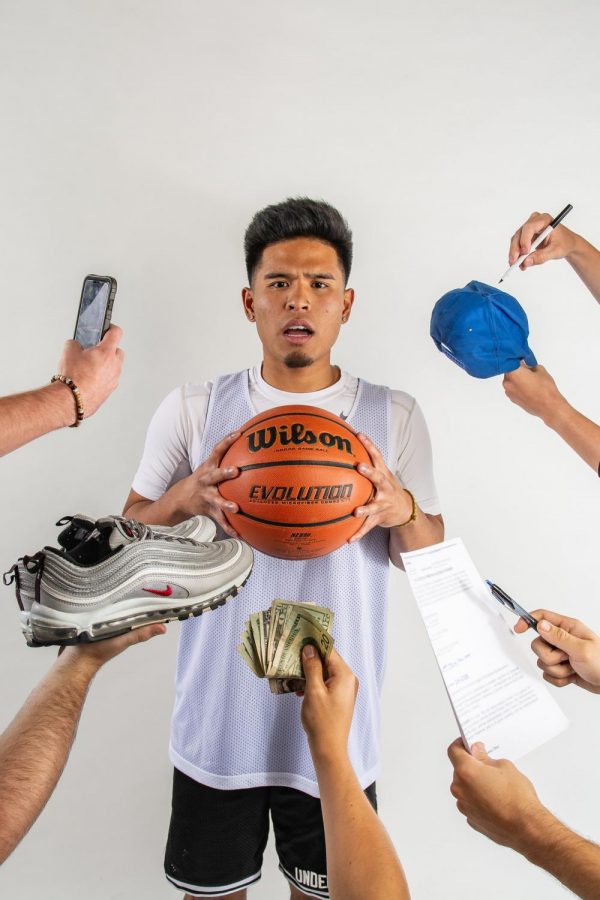 Donnie Edwards was an All-American linebacker at UCLA in 1995 when a bag of groceries was anonymously dropped off at the door of his apartment. Edwards, who had no money and no food, took the bag inside. This would be fine under normal circumstances, but in the eyes of the NCAA, Edwards had taken advantage of his likeness as a student-athlete and so they suspended him. Ramogi Huma, Edwards’ teammate and a freshman at the time, was outraged.

“At the time, they were selling his jersey in the store, maximizing profits off his name. But he couldn’t even eat groceries,” Huma recalled. “So there’s a lot of hypocrisy.”

Seeing how the NCAA treated his teammate, along with finding out that colleges did not cover sports-related medical expenses for athletes during summer workouts, led Huma to start a student group to voice the concerns of student-athletes. It would later grow into the National College Players Association, a nonprofit that Huma is still the head of today.

Huma has spent over two decades advocating for the rights of student-athletes and the culmination of his work so far was showcased on the morning of Sept. 30, when California Governor Gavin Newsom signed the Fair Pay to Play Act, a bill that Huma and the NCPA co-sponsored.

“It’s going to change college sports for the better by having now the interest, finally, of the athletes on par with the interest of the institutions,” Newsom said before signing the bill. “Now, we’re rebalancing that power arrangement.”

Newsom signed the bill on the set of The Shop, an HBO talk show hosted by LeBron James. In addition to James and his business partner Maverick Carter, there was another key figure with them who played a major role in shifting public opinion on compensating student-athletes.

Before Ed O’Bannon was a teacher in Las Vegas and before he became the face of a class action lawsuit against the NCAA, he was an All-American basketball player at UCLA. He won a national championship with the Bruins in 1995 and was the recipient of the John R. Wooden Award, given to the nation’s most outstanding college basketball player that year. His accomplishments on the hardwood led UCLA to retire his jersey, ensuring that no Bruin would ever wear number 31 again.

That was until O’Bannon saw his likeness in EA Sports’ popular video game “NCAA Basketball 09.” He noticed that the game featured his 1995 UCLA team and one of the players was his exact height and weight, had his body type, played the same position and even wore the same accessories he did. It was clearly a representation of O’Bannon, but he was never paid by EA for the use of his likeness.

O’Bannon later filed an antitrust lawsuit against the NCAA on behalf of its Division I football and men’s basketball players, arguing that the athletes should be paid for the use of their likeness in video games.

“I didn’t know what to expect other than the pushback,” O’Bannon said. “I knew that … a lot of people weren’t going to like it because, you know, it called for change.”

The lawsuit quickly made headlines and ultimately led to the discontinuation of NCAA video games. The critics were vocal and though it didn’t affect O’Bannon much, he was concerned about his kids being exposed to it. He did, however, take comfort in the fact that he wasn’t alone.

O’Bannon found supporters in NBA legends Bill Russell and Oscar Robertson, who joined the lawsuit. Harry Flournoy, who was part of the first all-black starting five at Texas Western in 1966, also joined the lawsuit and formed a close relationship with O’Bannon.

“It meant everything. They helped me keep my sanity, along with my wife of course, and my kids,” O’Bannon said. “They made life go on.”

The court ruled in favor of O’Bannon and held that the NCAA’s rules and bylaws operate as an unreasonable restraint of trade, violating antitrust law.

When the Fair Pay to Play Act takes effect in 2023, California student-athletes will be allowed to make money off their name, image and likeness without fear of punishment from the NCAA. They will be able to do things that were prohibited before such as sign endorsement deals, hire agents and monetize their YouTube channels.

The bill isn’t without controversy, however. The NCAA is staunchly against allowing players to be compensated, claiming that it would put an end to amateurism in college sports. The organization has even threatened to bar California schools from competing in NCAA championships in response to the bill, but Huma doesn’t believe it will be that simple and pointed out that other states such as New York, Washington and South Carolina are already planning to follow California’s lead and introduce their own legislation.

“If it tries to challenge all these different states from acting, who is the NCAA going to regulate?” Huma said. “It’s going to be exposed as basically a paper tiger because at the end of the day, if the NCAA can’t enact its illegal price fixing rules, it really has very little purpose.”

O’Bannon echoed Huma’s sentiments that the NCAA’s days of unchecked power are over.

“The NCAA is going to have to adjust the way they do business, simple as that. Otherwise, they’re just going to dwindle away and they will be irrelevant,” O’Bannon said. “So either adjust to the times, adjust to what’s going on, or you will slowly fade into oblivion.”

UPDATE: The original version of this story said that CSUN Athletics declined to comment on the bill. The day after it was published, they responded with this statement: “At CSUN, athletics is a powerful tool for engagement and contributor to student sucess. The Fair Pay to Play Act highlights an important issue for student-athletes. With the law set to take effect in 2023, there is time to develop a positive solution that allows California student-athletes and teams to compete. For now, we remain focused on supporting the success of our student-athletes both in the classroom and on the field of play.”