Behind the Scenes of a Medical Redshirt 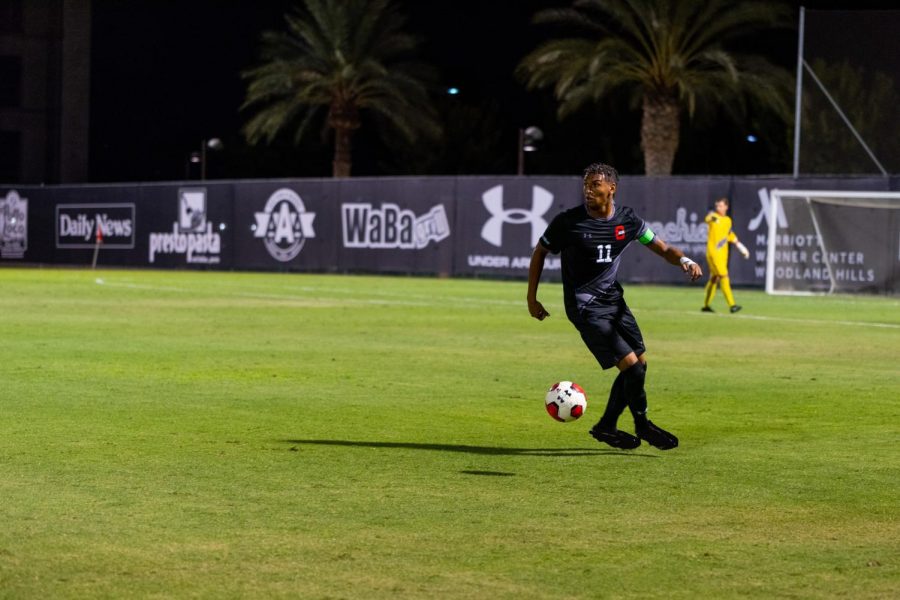 Courtesy of the Athletic Department

Devastating injuries happen on all levels of sports throughout the world, and fans have unconsciously constructed certain expectations of recovery when an athlete goes down. Whether it is a severely broken bone or a ruptured tendon, it makes little difference since audiences have seen countless athletes suffer these injuries and return no worse for wear, seemingly unaffected by the extended hiatus they had to endure.

Scenarios such as these are further desensitized for NCAA athletes due to the presence of medical redshirts.

Medical redshirts negate a year of athletic eligibility for student-athletes, who are unable to compete for a majority of their respective season for medical-related reasons.

While this rule may salvage a lost season for injured athletes, it does not make the process of rehabilitation any easier to go through.

One athlete that can relate is graduate student Ehi Isibor, who is a defender on the men’s soccer team. Isibor has redshirted twice at CSUN due to multiple torn ACLs, making him no stranger to the process.

“It was a lot harder than I thought it was going to be,” Isibor said. “I really thought I was going to do the redshirt year, get over the injury, and come back like nothing happened, but it doesn’t work like that … It is one of the most difficult processes I have ever dealt with in my life.”

Isibor suffered a major knee injury that included a dislocation, multiple fractures and severe ligament damage, but it was the mental aspect of the recovery that stood out. Injuries typically catch athletes off-guard, which in turn pierces the invincible armor that most of them erroneously believe they are encompassed by.

Junior Bethany Fitzsimmons of the women’s soccer team can attest to that when she suffered a torn labrum in her hip during her sophomore year.

“I honestly never thought that an injury would happen to me,” Fitzsimmons said. “A lot of athletes think that way because that’s just our personality, but I was really struggling a lot after it happened.”

The women’s soccer team won the Big West Conference in 2016, Fitzsimmons’ freshman year, and the anticipation of a follow-up year where she would be featured more prominently sparked enthusiasm. To miss the entire year due to injury was undoubtedly disappointing, but Fitzsimmons still found ways to remain engaged.

“Not being able to be a part of the team coming off a big year was super hard,” Fitzsimmons said. “But the coaching staff, especially (head coach Keith West), made an effort to keep me involved. So mentally I was there, it just sucked physically.”

It would be a tougher pill for Isibor to swallow, who found it difficult to enjoy team accomplishments while he was unable to compete.

“Your world kind of comes to a pause,” Isibor said, who before the injury was receiving interest from multiple clubs for an opportunity at playing professionally. “That was when reality set in of not being able to play your sport and watching from the sidelines. When your team would win a game, it doesn’t really feel like you win at the same time.”

Isibor emphasized his desire to play soccer for as long as he possibly could, and his injuries would introduce him to the business of sports, where players are treated as commodities rather than people.

“When I got hurt, everyone only saw ‘medical redshirt’ on paper,” Isibor said. “Like ‘whatever, he’ll be back next year,’ but it was way deeper than that. You really fall off the grid. No one talks about you anymore, you’re just a commodity to people. When you’re not using a commodity, you kind of just fall off.”

The disappearance is a mental battle that can seem never ending, especially with larger goals looming. But there can also be a different, more personal matter that bothers athletes forgotten due to a redshirt.

“It’s not so much about other people not noticing me, but not being able to play for my family was tough,” Fitzsimmons said. “It makes me so happy to succeed for them, and the pain of not being on the field and getting around the goal is like a slap in the face.”

That anxiety can lead athletes to either rush their recovery, or mistakenly convince themselves of adequate fitness early in the process.

Fitzsimmons noted the excitement of being pain-free a couple months after surgery, only to encounter daily rehab which made her “struggle a lot mentally.”

The lethargic pace of rehab makes it easy to feel disconnected, since the redshirt athlete is relearning how to perform mundane physical tasks while the rest of the team is undergoing strenuous preparation for a high performance activity. Both Fitzsimmons and Isibor applauded their coaches and training staff for minimizing these effects, but not every staff around the country can say the same.

“In previous years at my old school I felt like a lot of redshirts faded away from the team,” Isibor said. “That’s one thing that CSUN does really well, is keeping everyone on track.”

Certain players need the extra effort from a coaching staff. Isibor described his rehab process as “seeing an empty void,” and the experience present on the coaching staff, most notably from head coach Terry Davila, who is currently in his 21st year at the position, were a big help.

“Any time I was down and needed someone to talk to, (the coaching staff) were the first ones to have their door open and allow me to express how I felt,” Isibor said. “(Davila) has seen similar situations and he understood where they came from. He’s almost like a father figure in my eyes because of how much he helped me.”

Both Fitzsimmons and Isibor are captains of their respective teams, with Fitzsimmons tied for the team lead in goals scored, while Isibor is third on his squad in assists. They draw upon their experience sitting out and transmit it to their roles as team leaders.

“Two players on the team last year tore their ACLs and I knew exactly what they were going through,” Isibor said. “I feel like this injury allowed me to learn and be a leader for other players on my team and at this school … I did the worst things when I was injured. I completely shut everyone out and later found out that was the worst thing for myself.”

Fitzsimmons echoed these sentiments by imploring anyone going through a similar situation as hers to “stay interactive with the team. If you are exiling yourself because of your injury, then it’s hard to feel like a family which is something we really try to do as a team.”

These are only two out of thousands of cases where an athlete’s struggles are glossed over because of a label placed upon them. The process of returning from a medical redshirt is complicated, but as it pertains to what fans should understand about these athletes, Isibor made it simple.

“Just know that we aren’t just names on a piece of paper,” he said. “We’re human beings like anyone else.”