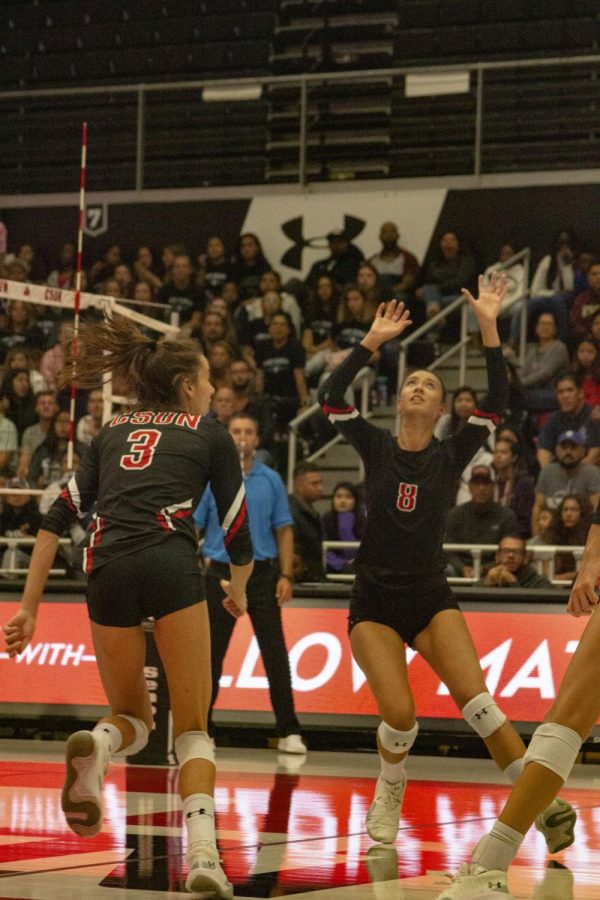 Kamalu Makekau-Whittaker prepares to set a ball up for a kill on Sept. 28. Photo credit: Serena Christie

The women’s volleyball team battled the Long Beach State 49ers in their second home match of the season before going down 3-1 Saturday night in a Big West Conference match at the Matadome. The Matadors won the first set 25-21 before losing three straight at 20-25, 20-25 and 22-25.

“They played better than us. I thought they stopped our attack pretty well. I thought they blocked more balls than we did which changed the type of hitting that we were doing,” said head coach Jeff Stork.

The loss for the Matdaors puts them at a 5-10 overall record and 0-3 record in conference play and puts them in eighth in Big West. Meanwhile, the win for the 49ers gives them a 4-11 record and 1-2 in Big West play and moves them into fifth in the conference.

Senior setter Kamalu Makekau-Whitaker got her fifth double-double of the season with 49 assists and 13 digs while junior libero Makayla Bradford led the Matadors with 15 digs.

“I really think it’s just us keeping our focus, like everybody on our team making that one better play,” said Waggoner. “I think we are doing a really good job at being consistent and just having good energy but I think it’s just that one more good play that we really need. So whether that’s keeping that serve in, better pass or a better kill, all of us could contribute one more better play.”

When the Matadors were leading 18-12 in the second set, the 49ers went on a 7-0 run to take a 18-19 lead. Down the stretch, the 49ers capitalized off of five straight Matador mistakes to tie the match 1-1. The Matadors would be unable to come back after that set as the 49ers would take the next two to win the match.

“Our offense started off very well. We should have won the second set but we didn’t,” Stork said. “Then, they started blocking a few more balls and we weren’t getting the kills we needed.”

The Matadors are now headed on a two game road trip, before coming back for a two game home stand. They will first take on the UC Riverside Highlanders on Thursday, Oct. 10 before heading to UC Davis to take on the Aggies on Sunday, Oct. 13.