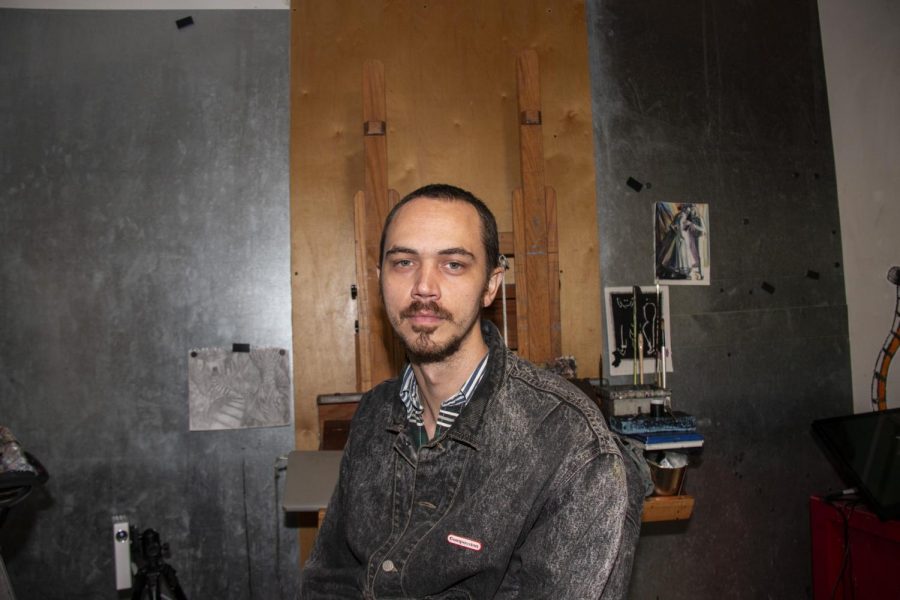 Artists have long been involved in progressive movements throughout history for the sake of a better world, believing in a cause that could surpass the legacy of their own artwork. Miles Lewis has turned his creative focus not only to the fine arts, but also to contributing solutions to the worsening environmental conflicts over the past decades.

Lewis has been involved with the San Fernando Valley community, taking the role as an art educator and environmentalist in a city that must reform its systems that are detrimental to the region. It is up to the city’s inhabitants to regenerate its beauty.

Angelenos breathe the worst polluted air in the country, with most people learning to live with it, treating the pollution as the norm. Lewis, however, has taken a stand and has been a growing voice advocating for a cleaner urban environment.

“This is the first time we have been forced (by physical circumstances) to be a liberated equal society in order to survive,” he said, during a brief speech at the Global Climate Strike to a crowd gathered in front of CSUN’s Sierra Hall. No one is an exception to the negative health effects produced by greenhouse gas emissions and other toxins that have forced people from all over the world to take action.

Lewis’ advocacy grew stronger after graduating with a Bachelor of Arts in printmaking from CSUN. He recalled that many of his professors were concerned with environmental issues, but back then he was not as involved. His work has been exhibited at the Annenberg Space for Photography and he has had numerous murals displayed all over the city.

Over time his involvement as an activist has drastically changed as he now brings a different perspective to the much-politicized debate in favor or against environmental reform.

“Now it has a left or right connotation and it didn’t use to be that way,” he explained, sitting at Valley Art Workshop situated in Woodland Hills where he hosts weekly classes as a space for local artists to better and practice their skills.

“Framing (environmental reform) as a matter of personal or collective liberty is something that is very much lost in the argument,” he said. “Often it is framed as a matter of equality but being liberated from air pollution is a pretty meaningful objective rather than being bound to whatever companies want to throw in the air or water, I think that makes it a liberty argument.”

Lewis also mentioned that much of the political discourse on the environment is focused on sustainability, despite it not being an effective way to move people to action.

“It’s not just about stopping doing things, because the effects of the systems in place have to be reversed,” he explained. “Agriculture has a lot to play on that. What we need to focus on is regeneration and once we’ve achieved that, preserving it. Sustainability is not an aspirational idea. Maintenance is not an aspiration. Regeneration is.”

Thinking of environmental freedom restoration and conservation through an artistic lens could make it more palatable for large groups of people to better understand. This method has been helpful especially during his presentations for students in college and high school classrooms. He’s been a guest lecturer for physics and sustainability professor Loraine Lundquist’s class, talking about the issue of waste.

“All of the environmental issues we have are nature design flaws,” he said. “We waste about 50% of our food that is never used. If the problem you’re solving is feeding people then it’s probably due to a design flaw.”

Recently, Lundquist ran for LA City Council District 12. In an effort to raise awareness for her campaign, Lewis worked with Lundquist’s campaign creative director Calvin Abbasi to create a comic book-styled pamphlet depicting her as a superhero fighting against “Mr. Suit and the Forces of the Status Quo.”

“I like the comic book art form,” Lewis said, “for explanation purposes comic books are more effective than mere visuals. This felt like a good use of art skills for communicating something that I’d like to see happen.”

Mailed to 50,000 homes, the comic book project has allowed Lewis to bridge the gap between his art and political activism. However, both activities don’t always intersect for various reasons.

One reason is that visuals alone may not be as effective. Lewis explained that “the greater value of my interacting with the community has been to encourage action in the community and it has to do with good education. It has to do with talking about an issue for 30 minutes and I can’t always do that with art.”

Visuals with an artistic scope depend on individuals’ interpretations and because interpretations could vary, it is not as effective to use it politically all the time. On the other hand, ridiculing an issue or an individual may achieve nothing.

“If you do a resistance march, say they have a big puppet of Trump, which is completely unnecessary, it does all these things that distance people from each other and concentrates hate rather than encouraging reform,” Lewis said. “It turns real, serious situations into caricatures and I don’t think that’s what we need. They contain some truth but what do you do with it?”

As a result, Lewis has extended his connections to the local community beyond the university campus through organizing events like the Paper Earth Fair hosted by Valley Green, San Fernando Valley’s environmental action hub. He has also helped coordinate the latest Reseda Rising event, along with 11:11 A Creative Collective, to ensure that as little plastic was used as possible.

These organizations have the goal to create an academy that bridges both science and the arts for the local community, which Lewis hopes will happen in the 21st century. He also hopes to see a change in the way humans use their resources to accommodate their lifestyle.

“A lot of consumerism has to do with the arts. It has a lot to do with advertising. It’s an idea that the life you want is one that includes a product,” Lewis said. “Once you include a clear sense of how resources are used and how they can be used, then it radically changes. It’s not about cutting out but making it a lot more artful. Doing more with less, making things beautiful by reducing them. If we build life around the quality of experience rather than the multiplication of ownership, it shows us how good a life can be with such a small environmental impact.”