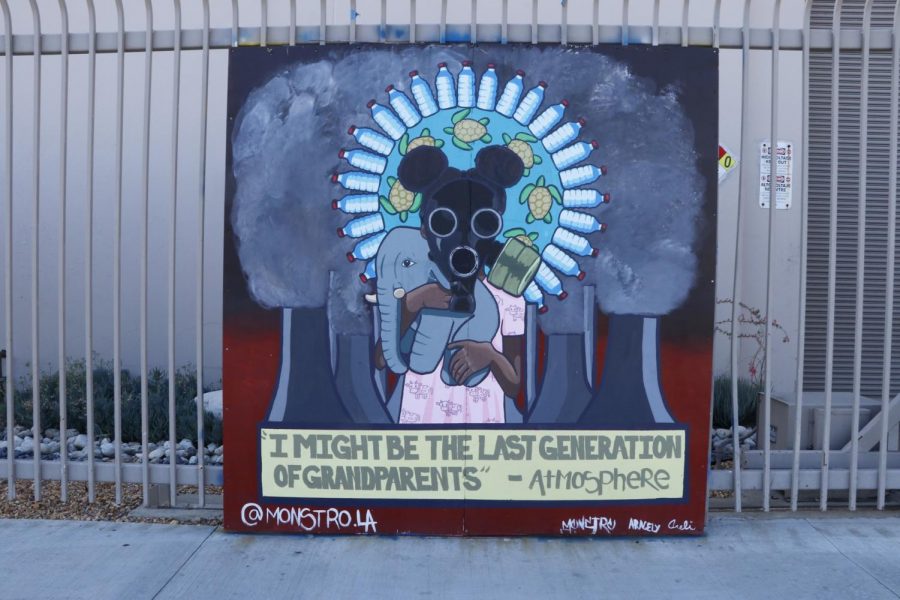 On the corner of Telfair Avenue and Van Nuys Boulevard an auto body and other auto repair shops line the streets, filling the air with the sickly fumes of paint. A couple of yards away, a little girl munches on her taco while her family sits under a tent in front of a taco stand, talking to the vendors.

The city of Pacoima has a population of over 81,000 with an 85% majority of Latinx and a relatively low median household income in LA County, according to the Los Angeles Times. Pacoima has one of the highest rates of pollution and contamination in the soil due to the clumps of industrial facilities, garbage dumps, a small commercial airport, a railroad line and the surrounding freeways that enclose the city.

In an article for KCET, former planning director of Pacoima Beautiful Max Podemski shared a zoning map that showed how Pacoima, compared to the rest of the San Fernando Valley, was planned to have a larger share of industrial facilities surrounding neighborhoods.

Pacoima Beautiful is a grassroots environmental organization that fights against environmental injustice in Pacoima. Felipe Escobar, organizing director, calls the city planning back in the day environmental racism.

“We know this was done on purpose and the planners did not include community input,” said Escobar.

According to CalEnviroScreen, an online tool that tracks pollution-burdened communities, the percentage of pollution burden in Pacoima is at 82%, where diesel, cleanup sites and hazardous waste are the highest pollutants. According to data from ThinkLA, 1 in 16 children and 1 in 7 adults who live in the north-east part of the Valley have asthma.

Escobar said the residents feel the effects of climate change firsthand during summer, because “not everyone has air conditioning or a park to escape to.”

He says they are trying to turn all those wrongs into rights by relying on their grassroots model to let the community provide input and solutions.

“If not, the same mistakes will happen again,” Escobar said.

But, he says, the hard part is the language barrier, because many residents only speak Spanish. One of the challenges they face is that not all members of the community have time to engage because of work. “They have to pay rent and other things,” he said.

Taehyun Kim, a journalism professor at CSUN, collaborates with Pacoima Beautiful for his senior project class where student journalists report on environmental injustice. He sends his students to talk to residents and members of Pacoima Beautiful.

Kim noticed that many of the problems were not being seen or told outside of the community because of the language barrier.

Currently, the organization is participating in a digital campaign with the Los Angeles Coalition for Clean Air to remove the gas plant in Pacoima. The gas plant has been there for over 50 years and has been the largest contributor to releasing toxic emissions in the Sun Valley area.

On Pacoima Beautiful’s Instagram page, students from their youth program tell their stories of what it’s like living next to the schools that are located near industrial facilities, freeways and other sources of pollution.

Andres Rivera, communications director, said that their goal is to have the community meet with the Los Angeles Department of Water and Power and talk about the possibilities of a new space after removing the giant gas plant.

“In order to call attention to that goal of the Green New Deal LA, it has to start in the communities who are most impacted by toxic sites,” said Rivera.

Van Nuys Boulevard is home to many murals that paint an image of the community, such as a revolutionary Mona Lisa with a sombrero and a blade.

Pacoima Beautiful has beautified their community through their Museo al Aire Libre, lining up panels on the street and hanging up paintings inside bus shelters where their artwork advocates for the environment.

But the biggest transformation has come from the community members, says Escobar. He’s seen people use their voice to talk to city officials and engage in democracy.

“If we don’t that’s how democracy dies. People of color experience racism everyday in our communities, in America. People are still struggling to live healthy lives,” Escobar said. He says it is up to college-educated folks to use their privilege and improve their communities.

Kim feels the same way with his students. He says it’s the role of watchdog journalism to tell the story of those communities.

“We can talk about Green New Deal, global warming, recycling, but we should not forget there are low income communities who are on the receiving end of this disproportionate amount of environmental pollution right here, right now,” he said.