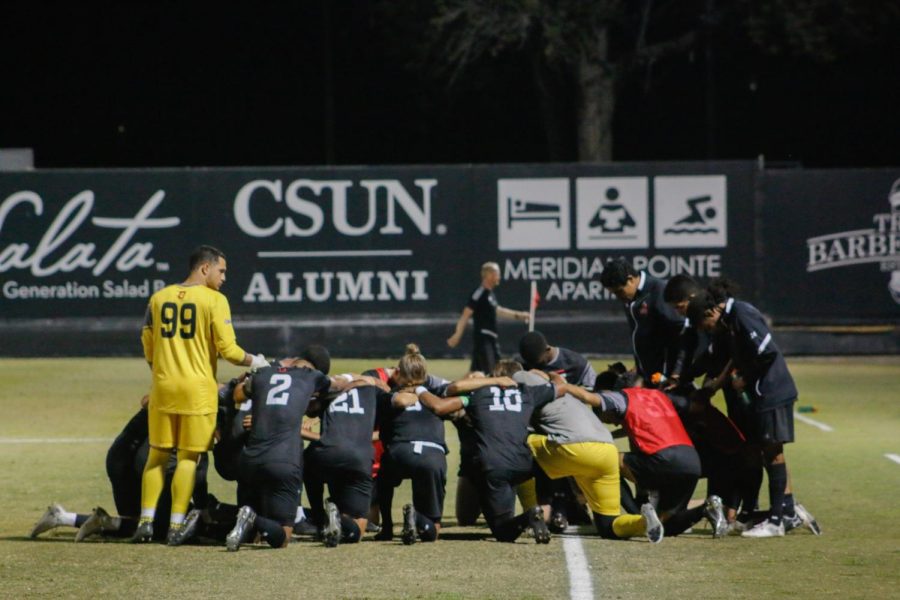 Both teams were scoreless at the end of the first half, though Sacramento State had led the game in shots at halftime 6-3. During the first 45 minutes of the game, both teams had four corner kicks.

The opening goal was scored by Sacramento State sophomore midfielder Oscar Govea in the 65th minute of the game. Arath Chavez’s pass went straight to Govea in front of the Matadors’ goal where his shot going towards the goal deflected off a CSUN defender and went in.

In the 69th minute, freshman forward Samuel Salter tied up the game at 1-1. Sophomore forward Wolfgang Prentice passed the ball to junior forward Daniel Trejo from the right side, who then headed the ball to Salter in the front of the goal and he scored his third goal of the season.

Sacramento State got the next two shots with one opportunity coming in the 71st minute and the other in the 78th. With less than five minutes to go in regulation, CSUN got two corner kicks. Those moments were two of few opportunities the Matadors had to take control of the game.

In overtime, the Matadors didn’t get a chance to go on offense as the game-winning goal from the Hornets came on the one and only offensive opportunity within the first minute.

Chavez gave Ben Kikanovic a good pass on the run. Redshirt freshman goalie David Preys came out of the goal to challenge Kikanovic’s shot, but the Hornets forward was able to get the ball past Preys to get his fourth goal of the season.

Sacramento State outshot CSUN for the night, 14-7 with five shots on goal. CSUN had a slight advantage in corner kicks, 8-6 with Preys having three saves for the game.

The thing that Salter liked about the Matadors this game was their ability to get out of the 1-0 deficit that they were in.

“The fact that we came back from 1-0 down was great. I feel like we deserved a win tonight, but unfortunately it didn’t happen tonight,” Salter said. “So we gotta just keep pushing forward.”

There were big differences between the first half and the second half of the game.

“I feel like everyone gave their all and we pushed as a team. We got the equalizer and it wasn’t enough, which sucks,” Salter said.

In order to prepare for the next game, CSUN will work on a lot of things to get better.

“We will keep doing what we do everyday, push hard in training and hopefully we can win this next game,” Salter said.

The CSUN Matadors going down 1-0 in the second half was a hard pill to swallow but they were able to tie up the game.

“It was good for our team because we had a few people running upfront, those guys were running and they produce a goal,” head coach Terry Davila said. “In order to overcome the 1-0 deficit, we just ran on the channels, produced the ball and it went in. Danny (Trejo) ran hard to the near post and the ball got loose and Salter came in behind to score.”

The Matadors still have some things that they need to improve on as they continue conference play.

“One thing that we can improve on is scoring. We have not scored a lot of goals these past four to five games,” Davila said. “You have to run and go put that effort in order for that to happen.”