CSUN student gets disenrolled from classes after financial aid falls through, remains hopeful 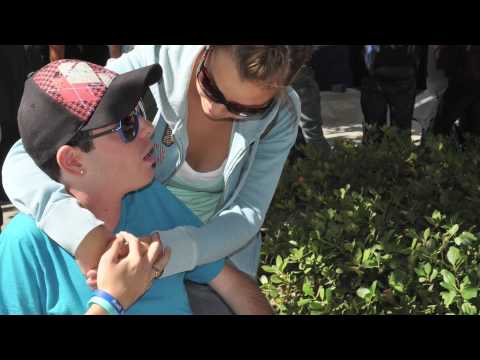 Being a social butterfly is a full-time job for Jake Hytken. While hanging out in what is known as “Greek Quad,” everyone passing by stops to say hello. The fact that he’s in a wheelchair is insignificant to others, as he is constantly referred to as the “life of the party.”

Hytken, a 20-year-old marketing major and San Diego native, has transferred his positive spirit onto the people he has encountered, despite setbacks in his life.

“He has a vibrant personality. Right when you meet him you’re attracted by his spirit,” said Sarah Faad, Hytken’s childhood friend.

“Whenever you are down, he always finds a way to cheer you up,” she said.

For as long as Faad could remember, Hytken has always possessed these qualities. He is a go-getter that will not stop until he achieves what he wants, she said.

Hytken is no stranger to struggle. At a young age he was diagnosed with an unknown form of muscular dystrophy that eventually kept him from walking and put him in a wheelchair.

“When I was 16, I got a real bad diagnosis,” Hytken said. “Within six months my doctor compared me to Stephen Hawking and Christopher Reeves from ‘Superman.’”

After those diagnoses, college was no longer an option. All he wanted was to give up on school and give up on himself.

It wasn’t too long before Hytken searched for help elsewhere. Talking to other doctors gave him hope for a different future. He realized there was a brighter side to the situation and decided to no longer give up.

“If we don’t get lows in our life, how are we going to get to a higher spot,” Hytken said. “I now am in a place in my life where I feel very fortunate to have a situation I have and to be alive.”

For Hytken, the fact that he was able to see college is the most amazing aspect of his life at the moment.

After going through numerous setbacks, Hytken is now able to pass his message on, to love life and see a positive outlook in each situation.

But along with the start of a new semester, the school year brought Hytken another drawback.

Before school started, Hytken was disenrolled from all his classes due to his financial aid coming in late. When he finally received the funding, he was no longer able to register for the classes he originally had.

“It doesn’t matter if I have (a) wheelchair, it doesn’t mater if I play the pity card. It’s not going to get me anywhere.”

Hytken was being treated like everyone else. The fact that he had a disability did not put him in front of the line anymore.

After e-mailing his professors and telling them about his situation, Hytken was still unsuccessful in getting his classes back. Even if professors wanted to help him, they couldn’t because the department had the ultimate decision.

Hytken had no choice but to enroll in other classes, and now he’s a semester behind.

“I have no idea what my expected graduation date is now,” he said.

After going through so many difficult situations in life, Hytken still believes in only moving forward. His friends all agree that his unique personality allows him to have friendships with most people he meets, but his sense of humor is what stands out most to others.

“I always ask people, ‘What’s the worst that can happen?’” Hytken said. “I’m already in a wheelchair.”

Besides being very active in classes, school and his fraternity, Hytken also dedicates part of his time to High Life Line, an organization that works with children who have cancer.

“Some people are content with a nine-to-five job and punching in numbers. That is not me,” Hytken said. “I want to inspire others.”

Ben Schenk, a close friend of Hytken’s who describes their friendship as Spanky and Alfalfa from “The Little Rascals,” sees him as an inspiration to others. People don’t identify him as Jake in a wheelchair, Hytken strives to be more than that, said Schenk.

“His literal goal is to make people happy. To make them appreciate life as much as he does,” Schenk said.