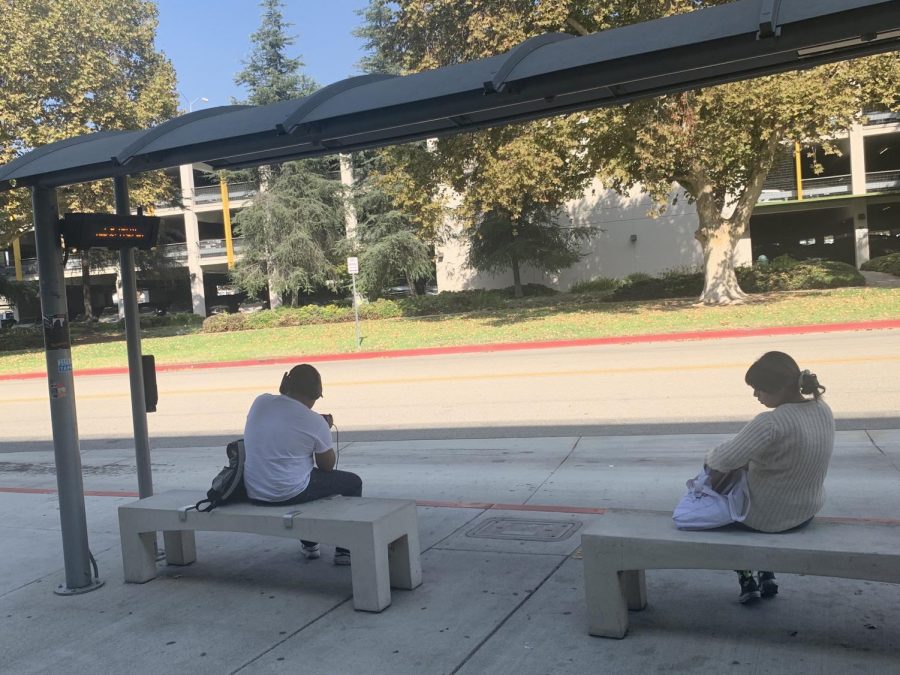 Students wait for the bus at the CSUN Transit Station on Vincennes Street on Oct 17. The station features four popular bus routes that travel both east and west for commuters all over the Valley. Photo credit: Michaella Huck

Metro, who has been pushed by the growing number of commuters in the San Fernando Valley to make transit more accessible, is inviting students to speak their minds at a public hearing at the Metro headquarters at 10 a.m. on Oct. 24.

The North San Fernando Valley Bus Rapid Transit, North SFV BRT, is an 18-mile bus line that will run from North Hollywood to Chatsworth. The bus line will run through either Nordhoff Street or Roscoe Boulevard. If it runs through Roscoe, it will pass Northridge Medical Center, but if it runs through Nordhoff, it will pass CSUN. According to Metro, the bus line will feature fewer stops, offer a convenient fare, use zero-emission buses and offer all-door boarding. The plan is set to be completed between 2023 and 2025.

Elizabeth Guzman, a second year commuter from North Hollywood, shared her testimony on how the new rapid bus-line will change her trip to school.

“I have an 8 a.m. and it takes me a cool minute to get to school on the bus because I have to take three, so I normally Uber,” Guzman said. “If this bus is really going to be from North Hollywood straight to CSUN, maybe I’ll consider the bus.”

While three project options were previously brought to the public’s attention in September 2018, Metro has dwindled it down to two options for residents, some of whom oppose the line running through Nordhoff, to share their opinions in their community meeting on Oct. 24. Due to this debate and its affect on student transportation, CSUN Associated Students is planning a trip that will include all students.

“We want to make sure students voices are being heard. It’s going to benefit low-income students that commute from that part of the Valley and it may be another option for a parking pass for others,” said Leslie Aguire, Associated Students Leadership Chair of Community and Government.

AS will be offering transportation to and from the Los Angeles County Metropolitan Transportation Authority in Downtown Los Angeles and CSUN. Students will meet in front of the Associated Student Leadership office at 8 a.m. on Oct. 24.