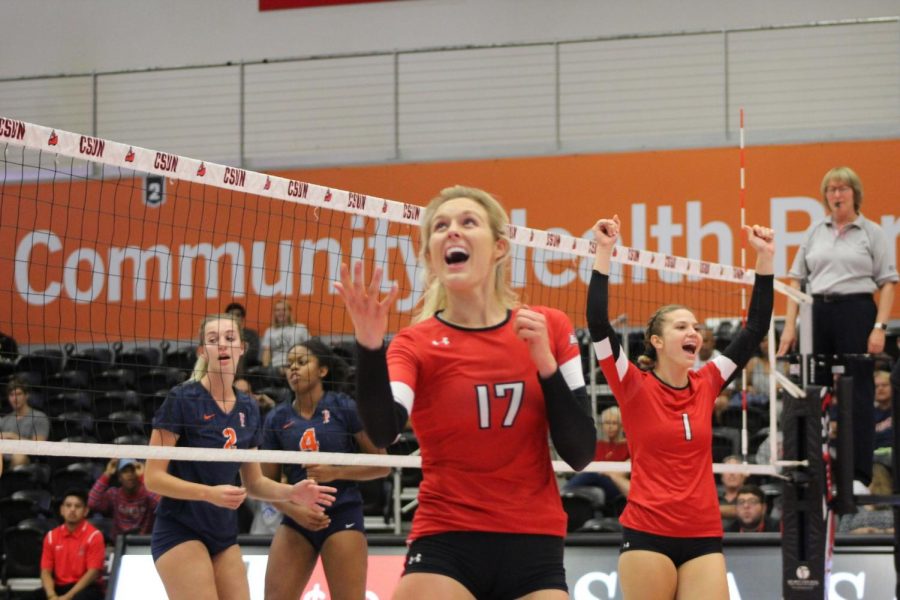 The women’s volleyball team dominated the Cal State Fullerton Titans on Saturday, winning all three sets 25-21, 25-21 and 25-19. This victory marked the team’s first home sweep of the season.

“We’ve been fighting to play well through a full match, we did that today,” head coach Jeff Stork said. “The team is (really) happy we came out with two wins this weekend.”

CSUN came into this match with an overall record of 7-11. They had struggled so far in conference play, only holding a 2-4 record against Big West opponents. CSUF came in with a positive 10-7 record, but they also had been struggling in conference play holding an equivalent 2-4 record. This match could have been seen as a “do or die” match for both teams.

“There was a lot of emotion in this match,” Stork said. “We knew what it stood for.”

This match was the Matadors’ second in a 24-hour span, having played a grueling five-set match against UC Irvine just the night before. With the match lasting over two hours, the team was able to pull out the victory against the Anteaters with a final score of 3-2.

Fatigue would have likely been a factor in their match the following day against the Titans.

“We definitely pushed through as a team and came with our heads out strong,” freshman outside hitter Taylor Orshoff said. “We all were saying we were tired but we came out working hard.”

The Matadors came out on fire to start the first set, jumping to a quick 6-2 lead. Fullerton fought back, bringing the score to a close 8-6. However, CSUN exploded offensively going on a 6-1 run to push ahead of the Titans.

The offense was firing on all cylinders behind kills from Orshoff as well as redshirt junior middle blocker Hayden Warnock and senior middle blocker Morgan Salone. The Matadors breezed to a comfortable 17-11 lead before the Titans began to climb back. They were able to bridge the gap, bringing the score to as close as 20-18, but CSUN was able to hold them off and won the set 25-21.

The second set was a much more even affair. Fullerton came out swinging to start jumping to a quick 2-0 lead. They were in the driver’s seat to start this set, with their largest lead being 10-7 over CSUN. However, the Matadors were able to erase this deficit, going on a quick 5-0 run the get the lead back from the Titans.

The set went back and forth with Fullerton once again evening the score at 16-16, but CSUN did not allow them to take the lead, always pushing back once the Titans began to get going offensively. Once again Fullerton made a push to take the lead, but back-to-back kills from Orshoff ended the set 25-21 in favor of the Matadors.

Orshoff was critical for CSUN’s success in the second set, scoring five kills with three of them being the last three Matador points of the set. The team was rolling offensively with four players having five or more kills so far.

“It felt good to get set and get those kills for my team,” Orshoff said.

With the team only being one set away from a sweep, the Matadors came out determined to end the match in the third set. However, the Titans did not give in easily and did not allow CSUN to pull away just yet. Fullerton was able to snag the lead early on, 8-6.

This is when the tide of the set began to turn as CSUN went on a 5-0 run to take the lead away from Fullerton. The Matadors rolled offensively and did not give up the lead again for the rest of the set. Fullerton kept it close for a bit, keeping the score within two points at 15-13, but CSUN was able to pull away, going on a 10-6 run to finish the set as well as the match with a 3-0 sweep over Fullerton.

“Our team played great tonight, we really pulled through,” Orshoff said. “Our first sweep at home, we played at the top of our game.”

Orshoff led the way offensively with a team-high 13 kills. Salone and sophomore outside hitter Seyvion Waggoner were also vital to the offense, contributing 10 kills each. Junior libero Makayla Bradford and senior setter Kamalu Makekau-Whittaker were vital for the defense, posting 14 and 13 digs respectively.

“(CSUN) focused very well, following the gameplan that we had asked them too,” Stork said. “Our offense was able to run what we would like to run.”

CSUN now holds an 8-11 record with a 3-4 record in conference play. The team hopes to keep their winning streak alive as they travel to Long Beach State for their next game on Oct. 26. The Matadors will have a two-match road trip until their next home stint begins on Nov. 1 against the UC Davis Aggies.