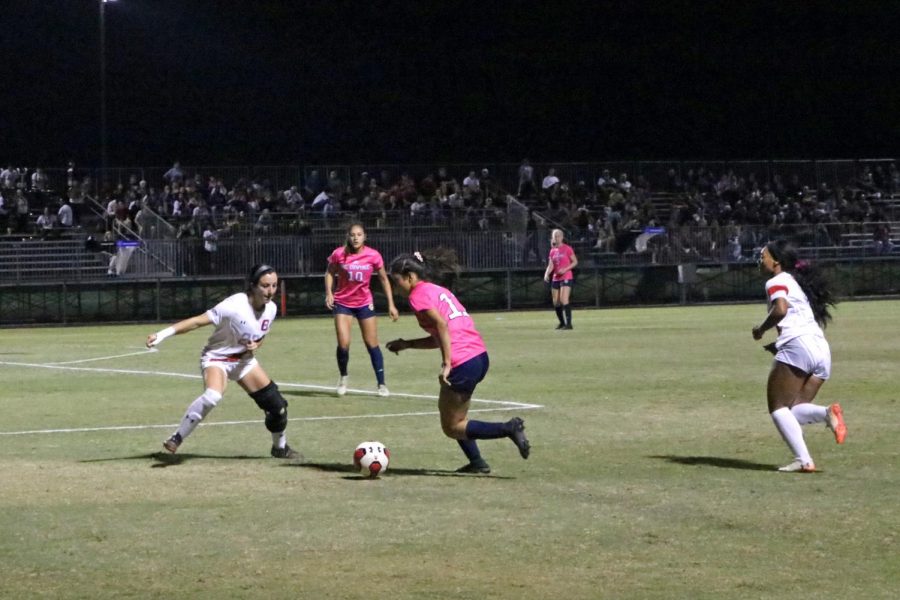 The women’s soccer team (10-4-3 overall, 4-1 Big West) secured their fourth straight conference victory in an overtime win against the UC Irvine Anteaters 1-0 on Thursday, gaining their 10th win of the season on Senior Night at Matador Soccer Field.

The Matadors, who were coming off a 1-0 win against UC Santa Barbara on Oct. 17, were able to add on to their three-game win streak with a win over the Anteaters, in their fifth overtime game of the season.

The Matadors outshot the Anteaters 13-12 during the game and also held a slight advantage in the shots on goal category 6-5. The Matadors recorded only four shots, with zero of them being on goal, in the whole first half but were able to pick up the pace in the second half. CSUN and UCI had a split in the corner kicks department 5-5 throughout the match while CSUN led the way in the possession category 52% to 48% over UCI.

With 24 fouls called throughout the game, the Matadors were responsible for 15 of them. Three yellow cards were handed out in the match with a pair of Anteater defenders Kala McDaniel and Maddy Chavez both receiving yellow cards while sophomore forward Alexis White for the Matadors received a yellow card for a late hit on the goalkeeper.

Junior forward Bethany Fitzsimmons led the way for CSUN with a total of four shots and two shots on goal, with senior defender Amanda Martin following with three total shots and one shot on goal in the match. The game-winning goal came in the 98th minute of play when Fitzsimmons’ shot was deflected by Chavez’s hand inside the 18-yard box, resulting in a penalty. After the handball was called, Fitzsimmons took the penalty and struck the ball into the left corner, giving the Matadors the win.

Sophomore goalkeeper Amanda Delgado recorded five saves for the Matadors for her sixth clean sheet of the season and the ninth for the team. Delgado built on her stellar season, bringing her season totals to 47 saves, 11 goals allowed, six shutouts and a 7-4-3 record in her 14 matches in goal.

The Matadors were celebrating their Senior Night shortly before the game in honor of the team’s two senior defenders, Amanda Martin and Amber Edemann, who helped lead the team to victory with solid efforts in the backline.

“I think as much as every single game it is important for us to get a win,” Martin said on the importance of getting a win on Senior Night. “I think it was more of a team win just to kind of celebrate the seniors in a way and it was just a positive send off just being able to show our energy and how far we have come throughout the season.”

“I think being such a young team with only two seniors and being able to come out with a win like that with such a young team,” Edemann said. “They really worked for us tonight as we work for them as well, so this win was a team effort.”

Head Coach Keith West and Edemann believed the Matadors didn’t play their best game but the energy and spirit helped them throughout the match to secure the win.

“It wasn’t one of our better games, we got unbelievable energy with our two seniors Amanda and Amber,” West said. “Our juniors and seniors have really taken over this group and I am a firm believer in energy and the spirit of this group is carrying us through the year. It has been a pretty special year and the way things have been going for us … I couldn’t be more proud of the group.”

“I am going to be honest it wasn’t our best game, but there is a spirit and energy that hasn’t broken the entire year that keeps us in games,” Edemann said. “We are just able to grind it out and like I said it wasn’t our best performance but a win is a win.”

The Matadors are currently on a four-game win streak and are at the top of the Big West conference with three games left in the season to secure the number one seed.

“We are a team right now in a place where we are in control of our own destiny and I think tonight it showed that we are really pushing for the conference title,” Martin said.

“Our work ethic is crazy, these girls won’t stop. Throw adversity at us, throw all these things we have to overcome and we are not stopping we are going for the win every single game,” Edemann said.

The Matadors will look to build upon their current win streak with a match up on the road against the UC Davis Aggies (6-10 overall, 1-5 Big West), on Oct. 27 at Aggie Field at 1 p.m.