A new era is underway in men’s basketball 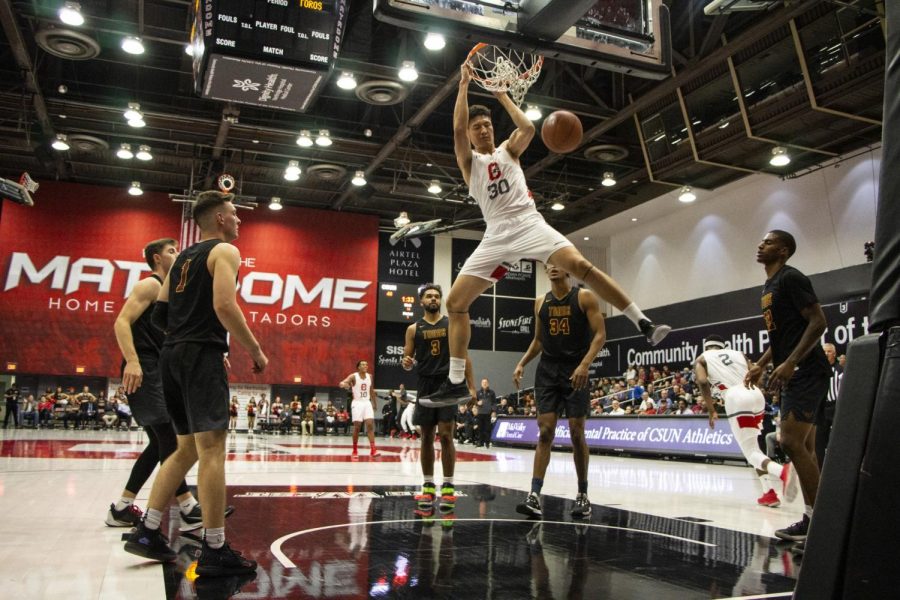 The hype is real for the CSUN men’s basketball team. After leading the Matadors to their best record in five years, head coach Mark Gottfried plans to get the team even further than he did in his first year.

The rest of the conference seems to have taken notice as well, with CSUN ranking third in the Big West preseason behind UC Irvine, who made a run in the NCAA tournament a year ago, and UC Santa Barbara.

The excitement isn’t unwarranted. The Matadors are returning 10 players from last year’s squad, including preseason All-Conference players Lamine Diane and Terrell Gomez, whose 1,470 combined points accounted for 56.5% of the team’s offense last season. Diane was sixth in the nation in both scoring and rebounding in his historic freshman season that saw him become the first player in Big West history to be named Player of the Year, Newcomer of the Year and Freshman of the Year. Gomez also had a big year, shattering the school record for 3-pointers with 117.

“They’ve gotten better. Each player has improved physically,” Gottfried said of his returning players. “Everybody knows what the expectation is, our philosophy, what we’re running offensively and defensively, so we’re just so much farther ahead. If you think last year at this time, we were just introducing everything for the first time.”

Gomez agreed that they are much farther along this year, but he is keeping the hype from last year’s team in perspective.

In addition to returning 90% of their offense, Gottfried is also looking forward to seeing some key newcomers make an impact on the team. Some key additions include JUCO transfer Lance Coleman II, a redshirt junior coming in from Fullerton College. Coleman averaged 19.4 points, 7.6 rebounds and 2.4 assists for the Hornets en route to a California Community College Athletic Association State Championship last season. The Antioch native was named MVP of the CCCAA tournament.

Dmytro Skapintsev is another newcomer that Gottfried expects to contribute right away. The 7-foot-one-inch center out of the Ukraine has spent the last 10 years with Cherkasi, a club in the European SuperLeague. He has also competed at the Adidas Eurocamp in 2016 and 2017, along with representing his country at the FIBA World Championships on the U16, U18 and U20 teams.

Although Gottfried is excited about the possibilities for this year’s team, he is keeping them grounded about the realities of the early season grind that they face.

“We have a very difficult nonconference schedule,” Gottfried said. “Most of our games are on the road. I know a few at home, they’re against good teams. So we’ll see how that translates for us, as far as our record goes before we get into league.”

Gomez embraces the grind that the first part of the season presents, and it only feeds into his goal of making it to the NCAA Tournament in March. He and the team are hungry to prove themselves, and Gottfried is confident this team can take the next step.

“I think they feel like we can beat every team on the schedule, but we got to put it together and do it,” Gottfried said. “But they’re excited, they’re anxious to start. They’re very hungry to have a good year.”

The Matadors christened the Matadome this year by defeating Cal State Dominguez Hills 81-70 in an exhibition game on Oct. 28. They open the 2019-20 season on Nov. 5 against the Oregon State Beavers in Corvallis, Oregon. The game will be televised on the Pac-12 Network.