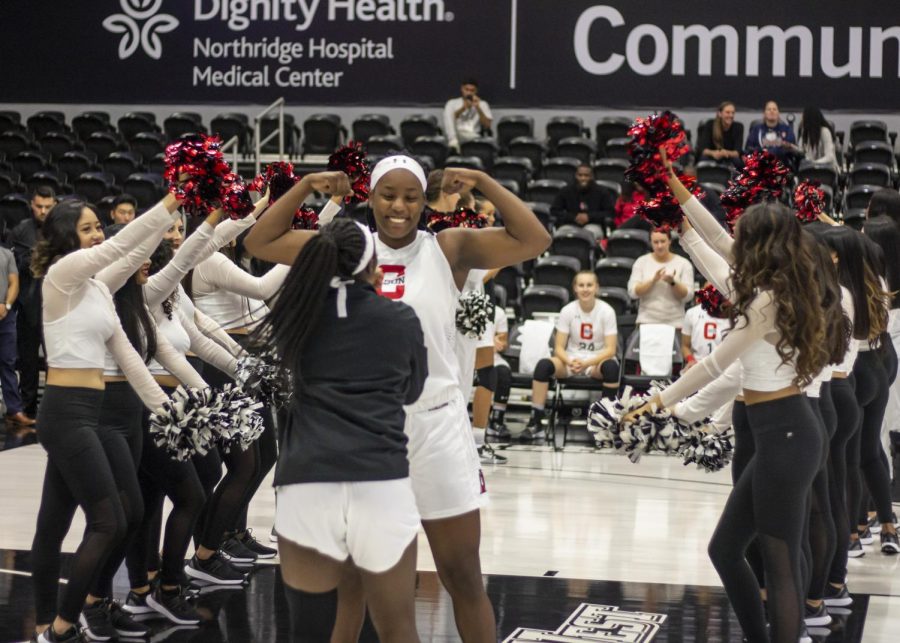 Redshirt senior De'Jionae Calloway walks down the tunnel of cheerleaders during the pregame celebration of the women's basketball exhibition game against The Master's University on Oct. 29. Photo credit: Tim Strong

Head coach Jason Flowers enters his 10th season as the women’s basketball coach and hopes for the Matadors to go even further than they did during the 2018-2019 season. They lost in the first round of the Big West Tournament to UC Irvine and finished the season 16-15. CSUN returns seven athletes from last year’s roster with six of those being the leading scorers for the team.

Last season, each of those six players averaged three or more points per game, including a solid 6.2 points per game averaged by redshirt senior De’Jionae Calloway. Most of the remaining six led in other categories: senior Eliza Matthews led the team in rebounds with 139, senior Hayley Tanabe had 67 assists, junior Meghann Henderson had 23 steals and sophomore Jordyn Jackson led in 3-pointers made with 20.

The Matadors have a great recruiting class for the 2019-20 season that includes four freshmen and two transfers. Flowers added some new talent, including junior Brandy Huffhines, who helped lead the Sacramento City College Panthers to a 20-11 record and to the third round of the CCCAA NorCal Regional Playoffs as a sophomore.

“I think they are all kids who could contribute in different ways and I think they all understand what we’re trying to do here as far as in our program and how we do things,” said Flowers. “But they are freshmen and anytime you have freshmen there are going to be highs and there are going to be lows. It’s kind of a roller coaster dealing with most freshmen but I really like them, they’re good kids … You learn what it really takes to compete at this level and I think they learned that pretty quickly. Now they are making adjustments in order for them to continue to grow and get better.”

Huffhines was named All-Conference two times, as well as third team All-State and Sacramento City College’s Female Scholar Athlete of the Year. She averaged 14.2 points, 2.4 rebounds, 3.9 assists, 0.2 blocks, and 1.8 steals while shooting 47.6% from the field, 34.3% from deep, and 83.9% from the free throw line per game.

She scored 425 points, grabbed 71 rebounds, dished out 118 assists, had 55 steals, blocked six shots, and made 23 threes. Calloway, Henderson, Matthews, Jackson, Tanabe, and Huffhines will provide scoring, floor spacing, and playmaking for the Matadors.

Seeing all of these people getting back on the court is going to be very exciting with this new group, and the players on the team will have new roles.

“Obviously it’s frustrating at times just because I think I am an impatient person when it comes to some things but as far as the things that we are going to be able to do, I see the growth of this group and them starting on this journey has been exciting,” Flowers said.

Flowers’ goal for this year’s team is to be the best that they can be and win the conference championship. The road to the championship will not be easy, but the Matadors have the talent to achieve that goal.

A lot of things need to happen in order for the Matadors to win the Big West, and it will take everybody on the team to do their job.

“It’s going to come down to if we’re willing to sacrifice for each other and when it costs what it costs,” Flowers said. “If kids are willing to pay the price, we will be successful, and if they aren’t, then we won’t. It’s not easy or else anyone would be doing it. It’s really hard to do but it is that simple when you are in a team environment.”

“From individual players and a complete roster, I think that there will be balance throughout this team and this roster,” said Flowers. “I think it’s going to be hard for teams to just focus on one person or try to take away one player. It’s just going to take some time for them to figure out how it works for them at this level.”

This year’s team chemistry is the best chemistry that it has had in awhile. The team does a lot off of the court together, and spend time with each other and practice on their game without being told to. The team has the potential to get good results because of this chemistry.

There are many differences in this year’s team compared to last year. The Big West Conference continues to improve and they are looking forward to the challenge. They have a tough schedule ahead of them as two of the teams they will face competed in the NCAA Tournament last year.

“We are a faster and quicker team and I think our style of play will reflect that,” said Flowers. “We are all excited to get going.”

The Matadors play their first regular season game on Nov. 5 against USC at 7 p.m. in the Matadome.