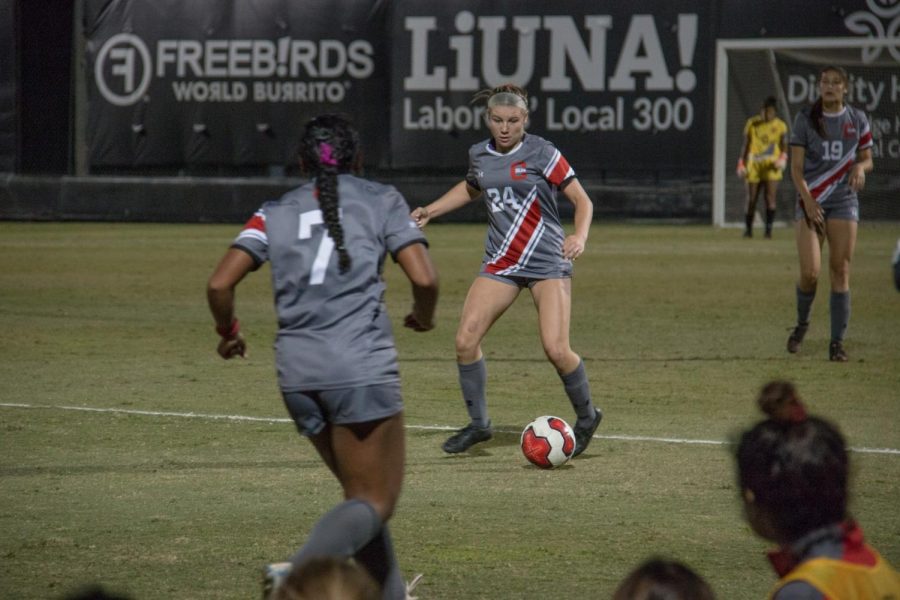 “I think Long Beach has had our number for a couple years now,” said head coach Keith West. “I thought we had a heck of a team effort tonight. They’ve been pretty hungry for them for awhile now and I’m really proud of our young ladies.”

In addition to snapping the skid, the win placed the Matadors in a tie for first place in the Big West conference with Cal State Fullerton (11-2-4, 4-0-3) and it extended their season long home winning streak to four.

West emphasized the importance of winning at home while crediting his defense for holding opponents scoreless throughout the streak.

CSUN had multiple attacking opportunities within the first 10 minutes of the match. Redshirt junior Bethany Fitzsimmons registered several shots on goal, but none were able to break through.

Long Beach sought to take advantage of the missed opportunities by mounting consistent offense. The 14th minute presented a prime opportunity for the 49ers as sophomore Sierra Castles blasted a shot from outside the box that required an acrobatic, one-handed save from sophomore keeper Amanda Delgado.

Fitzsimmons would redeem the early misses in the 17th minute when she corralled a free kick from midfield off of her chest and hammered the volley home to put the Matadors up 1-0.

FItzsimmons has now scored in three consecutive games and her six goals on the year is a career high.

“At the beginning of the season I was struggling a little bit and my confidence was low,” said Fitzsimmons. “Then as a whole our energy got so much better and it allowed me to go into games with a really clear mind. After that I felt like I was unstoppable.”

The two squads would exchange the ball throughout the midfield without a true offensive attack until after the break in the 66th minute, when 49er sophomore Kaylee Ramirez displayed a nice bit of skill to get past multiple Matador defenders at midfield before passing a perfect ball in front of goal, but sophomore Elysia Laramie’s shot went wide.

The frustration began to mount for Long Beach as they were unable to penetrate the CSUN back line, and they were denied by Delgado the few times they broke through.

The Matador back line had a different look with redshirt freshman Ify Mbeledogu stepping in for an injured defender. West expressed pride over his squad’s depth as the defense didn’t miss a beat with the replacement.

“I think that’s why you call it a team,” said West. “It’s on any given day. Players have to make plays and it was Ify’s number today and she stepped up and played great. I can go on and on and list the players tonight that did well and I’m proud of the group as a whole. We knew it was going to take a team effort and we were going to have to go 90 minutes tonight.”

The anxiety from Long Beach led to heavy touches and frequent turnovers that nearly resulted in the deciding goal when a counter attack in the 85th minute led by Fitzsimmons and freshman Cindy Arteaga was capped off by a nice save from Long Beach keeper Ashley Seymour.

Despite Seymour’s three saves, it was Delgado who stole the show in front of goal as she notched five saves, rendering the 49ers’ slight 5-4 advantage in shots on goal meaningless. The star sophomore has 16 saves over the last three matches and her latest effort helped the Matadors end their final regular season home game with a win.

After a brief hiatus, the Matadors are back atop the Big West standings with a big matchup against their first place neighbors on the horizon. While the Big West tournament looms, Fitzsimmons reflected on what makes this squad special.

“Our team is very special this year because we have a lot of younger players that are playing key roles in our game,” said Fitzsimmons. “The drive and dedication of our team throughout the summer and every day at practice where we show up with a purpose and have such a good time with one another. I think we’re working for one another more than anything.”

CSUN will hope to carry their momentum into Fullerton on Sunday at 2 p.m. in a matchup against the Cal State Fullerton Titans with the Big West regular season title on the line.