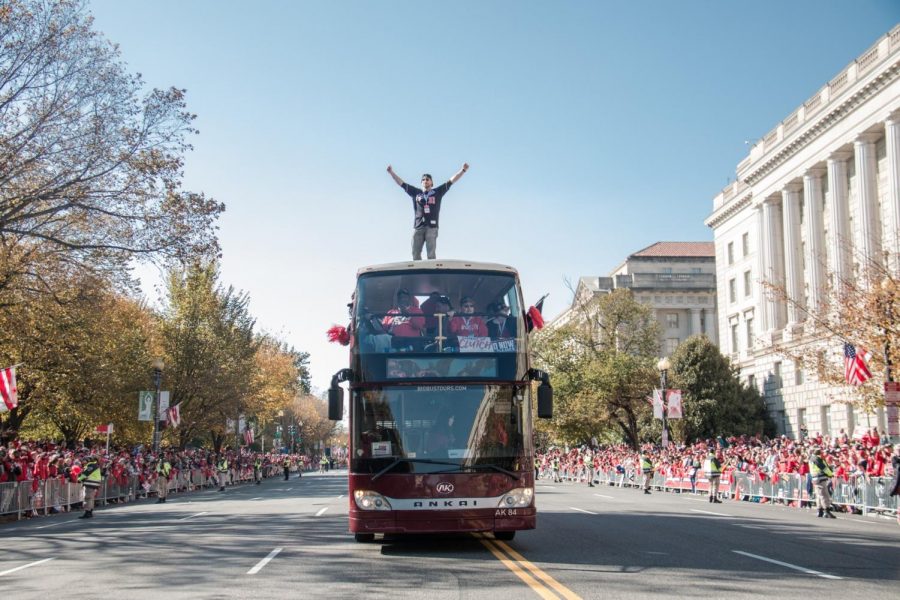 Nationals pitcher Max Scherzer stands atop of the bus driving down Constitution Avenue during the championship parade on Nov. 2 to celebrate the Nationals winning the World Series. Scherzer had 3-0 postseason record during the 2019 season. Photo credit: Logan Bik

Fans filled the streets of Washington, D.C.on Nov. 2 in celebration of the Washington Nationals winning the 2019 World Series. Closing the seven game series in Houston, the Nationals secured their first World Series championship in 95 years.

The route was a mile-long stretch along Constitution Avenue from 15th Street to 3rd Street. Fans of all ages packed the streets for the opportunity to see their team up close. The celebration began on Constitution Avenue with different community organizations and sponsors walking the streets throwing out swag and giving high-fives to fans up against the barricades. In between the parade walkers the Nationals players could be found in double-decker buses with friends and family members all waving at fans in celebration. National monuments can be seen in the background of the country’s capital.

The two hour long parade concluded with Nationals first baseman, Ryan Zimmerman, holding the trophy high in the sky for everyone to see. Confetti filled the streets as the sea of red, white and blue faded away from the streets of D.C.