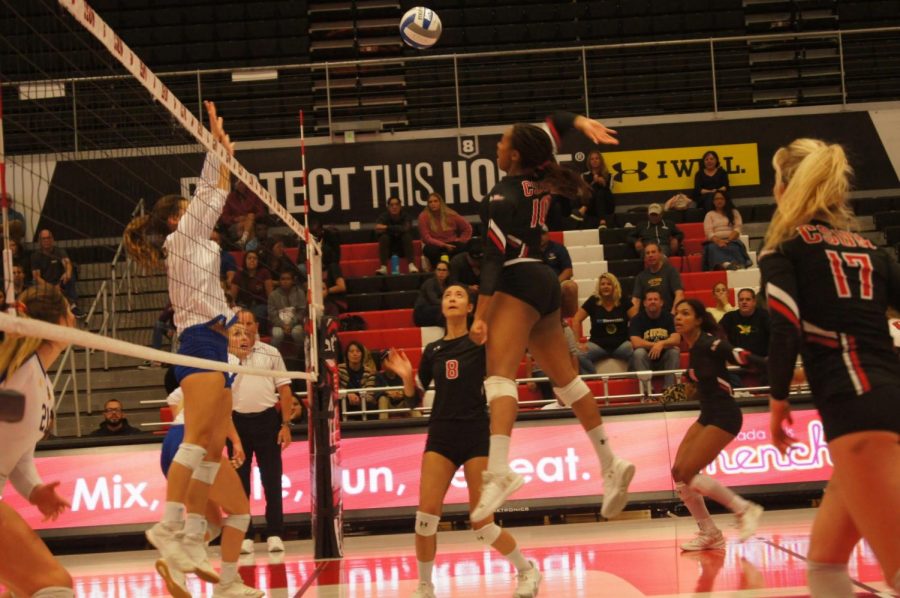 Sophomore outside hitter Morgan Salone (10) attempts to get a kill for the Matadors against UC Riverside on Nov. 2. Photo credit: Bryanna Winner

The Matadors defeated the UC Riverside Highlanders on Saturday, sweeping the team in three sets 25-18, 25-15 and 25-18. This home victory marked the team’s fourth straight home win and second straight sweep, bringing their overall home record to 4-2.

“I thought the offense was pretty good,” head coach Jeff Stork said. “Riverside was making a lot of errors. When they give us eight, nine, ten (errors) in a set that makes our job a whole lot easier.”

The first set started even enough for both teams, with CSUN leading 5-3 after some back and forth offense. Behind a series of kills and errors, Riverside went on a quick 9-4 run to gain the lead at 12-9. This was Riverside’s most productive period of the set as CSUN began to take command of the match.

A series of kills from senior middle blocker Morgan Salone and freshman outside hitter Taylor Orshoff allowed the Matadors to even the set at 16-16. After being down at one point 16-13, the Matadors were able to go on a 12-2 run to close out the Highlanders and win the first set.

“We had a lot of (players) that played very (well),” Stork said. “Our middles were working out very well. Taylor Orshoff on the right was spectacular.”

Orshoff and redshirt junior middle blocker Hayden Warnock led the Matadors offensively in the first set with four kills each. Salone was also an integral part of the offense with three kills of her own.

The Matadors started the second set on fire, jumping out to an early 7-1 lead over the Highlanders. Riverside pushed back against this offensive onslaught, going on a quick 4-1 run to shorten the lead to 8-5.

The Matadors dominated this set through and through. Although the lead did not get too large over the Highlanders, there was no doubt the Matadors would take this set. Riverside stuck around for a while, trading points back and forth with CSUN, never allowing the lead to get to more than five points.

However, CSUN closed them out in very effective fashion, going on a 5-0 run at the end of the set to win 25-15. Three straight kills from Orshoff ignited the set-winning run, which was concluded with a final kill from sophomore outside hitter Nicole Nevarez.

“We got a lot of kills and a lot of blocks,” Salone said. “We kind of shut their team down and made it happen tonight.”

On the verge of defeat, Riverside did not give in easily. After CSUN jumped to an 8-5 lead early in the third set, Riverside scored six straight points and took the lead 11-8. Riverside kept the lead at 13-10, but three straight errors from their side allowed CSUN to tie it up at 13. This was the beginning of a set-closing 15-5 run by the Matadors.

Eight of the points CSUN scored on this run were from Riverside errors. The Matadors were able to take advantage of their opponent’s mistakes and the team won the last set 25-18 off kills from Nevarez, Salone and Orshoff, completing the 3-0 sweep of UC Riverside.

Orshoff led the team in kills in this match with 11. Salone was also important to the offense this match with 10 kills herself. Junior libero Makayla Bradford led the way defensively with 12 digs. Sophomore outside hitter Lexi McLeod was also an integral part of the defense with 11 digs herself. The two setters set their hitters up very well this match as senior setter Kamalu Makekau-Whittaker and redshirt sophomore setter Hannah Merjil recording 16 and 15 assists, respectively.

“At home, you have all your fans and supporters here,” Salone said. “The energy is really different”

This win was the Matador’s fourth straight home win for the team. With only two home matches remaining, the team looks to close out the season on a strong note.

“One of our team goals was to have a winning record,” Salone said. “We want to win the next few games and make it into the tournament.”

The Matadors now possess an overall record of 10-13, with a 5-6 record in Big West matches. A winning record is still possible for the team with five more matches remaining. However, their last three games will be against the three best teams in the conference.

“We are gonna have to play some tough matches the last three (games),” Stork said. “It’s a tall order for us to come away with the majority of wins against three quality opponents.”

The Matadors’ next two games are on the road, but the team will return home on Nov. 15 for a match against the first place Cal Poly Mustangs.