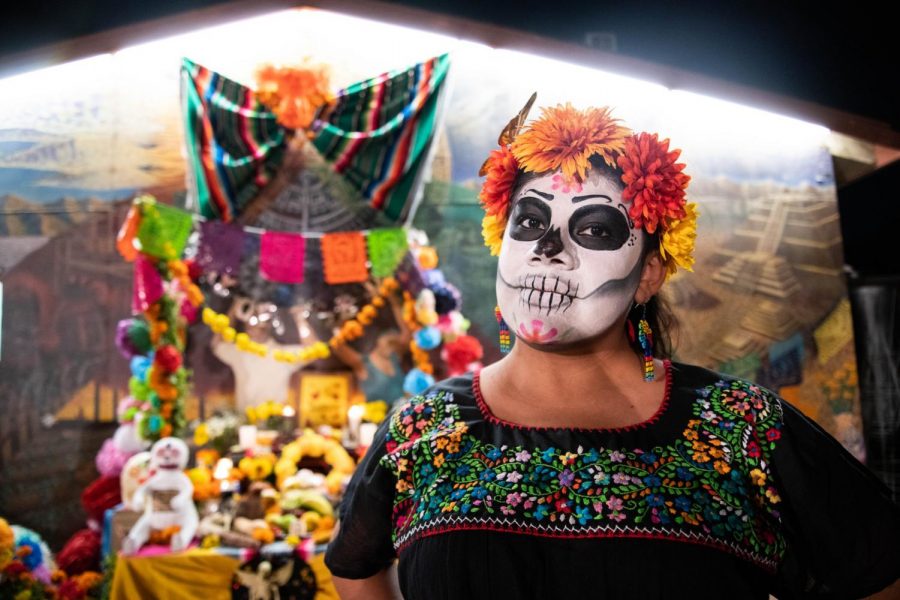 The aroma of Cempasuchil, also known as “Flor de Muerto” filled the air at the Chicanx House where students and families celebrated Dia De Los Muertos, Day of the Dead. This year, the CSUN community honored their loved ones with numerous performances from guests and students. The term Miccailhuitl translates to “celebration of the dead” from the Nahuatl tongue. The word cempasuchil also derives from the Nahuatl which are known as marigolds in English.

“The scent of this flower awakens the dead and invites them to once again live amongst us and celebrate their lives”, said Xochil Martinez, a Chicano Studies major.

On the first night, guests were welcomed by Aztec dance group, Circulo de Danzantes Grupo Guajolote, where they gathered by Jerome Richfield and were led to the Chicanx house where the rest of the event settled for the night. The celebration featured an Art exhibit inside of the Chicanx House and was organized by students and community members. Altares honoring loved ones were decorated with candles, pan de Muertos (bread of the dead) candy, and other food and drinks their loved ones enjoyed.

A tree of ofrenda called “Chichihuacuahco” was dedicated to the children who have died at the US Mexico border. This part of the exhibit was created by students in the Chicano Studies 380, led by Chicana/o Studies Prof. Yreina Cervantez, for the event.

Cervantez said, “This event has been celebrated for around 37 years on campus and the students and staff really illustrate a lot of emotion when building these altars for their loved ones. It is a special night and I am proud of CSUN for really showing the community our cultural values with these celebrations.” This was Cervantez’s last year as a professor at CSUN since she is retiring. On the second night, Martha Escobar said some words of love recognizing the work of the professor as an educator and as an artist.

“I try to encompass the soul of our Latin American culture into tonight’s performance. Dia De Los Muertos brings out deep emotions that can be cured playing some of our favorite music, and sharing food and bread with the dead, tonight they are not dead but live amongst us,” said Hernandez.

Melisa Robles Jr. and Co-chair of M.E.CH.A acknowledges the value this yearly tradition has for the Latinx community. “MECHA and the Chicano Studies department plays a vital role in representing our cultural values. You can see the community really come together and share music, dance, food, and open dialogue in an intimate night.”

The second night featured more performances and a space for vendors to sell their crafts and artwork. Some of the performances included a 30-minute play honoring the tradition of Chicano Theatre since the1960s, the subject of the play commented on the reality that families live as immigrants and are separated by ICE. Viento Callejero pumped up the crowd with their psychedelic cumbia sound and ska band, Matamoska, ended the night culminating the Dia De Los Muertos celebration.