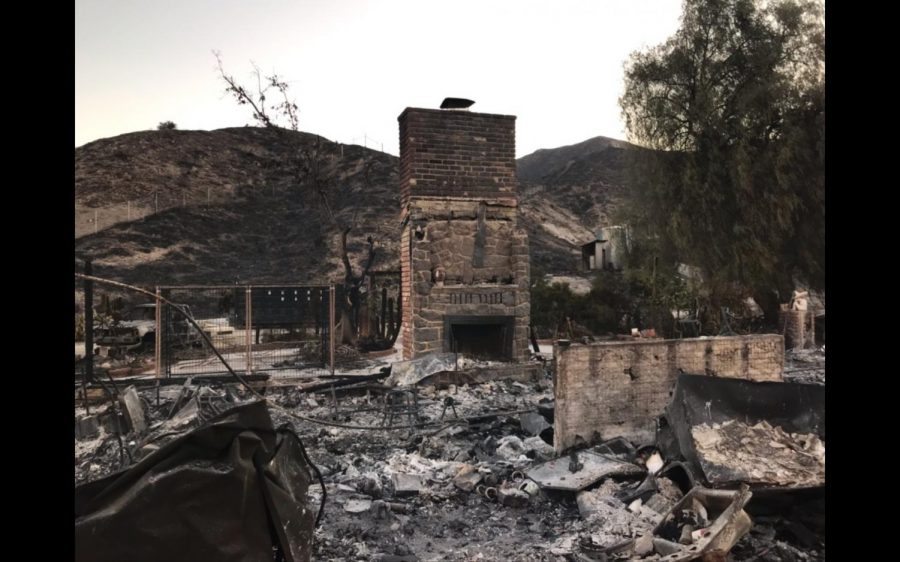 Robin Thompson's home in Santa Clarita after the Tick Fire.

CSUN freshman Robin Thompson watched the local news coverage of the Tick Fire on his phone as his dad picked him up from campus on Oct. 24. Originally thinking the fire was closer to Agua Dulce, reality set in when they saw clouds of smoke surrounding the hill they’ve called home for nearly 20 years in Canyon Country.

Fearing the worst, Thompson and his dad approached their home and witnessed as his grandmother’s trailer was completely engulfed in flames. There was no possibility of escaping the fire. Luckily, his grandmother decided to leave with some friends earlier during the day.

“Some call it divine intervention, my grandmother rarely leaves home. But somehow we were lucky everybody survived and only material possessions were lost,” Thompson said.

With only the roof of their house on fire, the Thompsons decided to go inside and search for something salvageable.

“My heart sank as a I saw the flames and heard my dogs barking inside,” Thompson said. He and his dad entered the home and managed to save their two dogs and a couple of musical instruments, but not much else.

“The smoke was suffocating, I can still remember the smell and unbearable heat of the fire,” Thompson said. “We had no time to save anything, all of our family’s photos are gone. Those sentimentally valuable possessions are the hardest to recover.”

After leaving the property, they reunited at Thompson’s mother’s hair salon, where her softball teammates welcomed them with food and comfort. The Thompson family was also offered shelter from the fires for as long as necessary by members of the team.

Thompson, a member of the Northridge Singers, has practiced music for nine years. Two years ago the Thompson family built a music recording studio inside their home, which was destroyed in the fire. However, Thompson won’t let his musical aspirations go up in flames.

Paul Smith, Assistant Professor of Music and Director of Choral Activities and conductor of both the Chamber Singers and the Northridge Singers, praised Thompson’s determination.

“Robin’s story is truly compelling. He came to me and pledged he would continue to practice even after this tragedy in order to be ready for Wednesday’s night performance at the Soraya Hall,” he said.

Smith says that he was amazed when Thompson reached out to him regarding being at practice, noticing that despite the hardships he was going through, he was still willing to come out.

Thompson intends on performing in the University Chorus and Northridge Singers’ performance on Nov. 6 at the Soraya, where the group will be performing G. F. Handel’s “Messiah,” specifically “Part the First” and “Hallelujah.”

“My family will be in attendance, I will sing for them,” Thompson said. “I will sing to cope with this tragedy. I believe in the power of music and its ability to heal.”

Thompson’s community has responded in their time of need. A friend set up a GoFundMe page in hoping to aid in the family’s recovery, collecting nearly $10,000 in less than one week. Many of the contributions were made by family and friends, including some of Thompson’s Canyon High School Choir teammates.

“My family is eternally grateful for our friends and community which has blessed us with great support during this fire,” Thompson said. “It fills my heart knowing there are always going to be people who care to help when everything seems lost.”