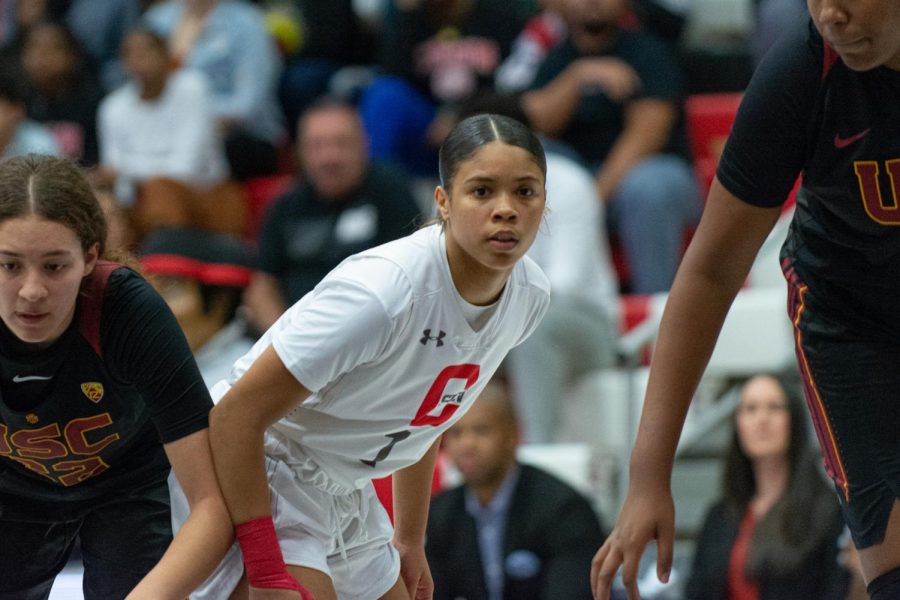 Jordyn Jackson, sophomore, led the Matadors in points on Tuesday night against USC. She is one of six returners to the team this season. Photo credit: Joshua Pacheco

Tuesday marked more than the beginning of a new season for the Matadors — it marked the beginning of a new team. Channon Fluker, the two-time Big West Defensive Player of the Year, league leader in rebounds and school record holder for blocked shots in a single season, is gone. In fact, five players from last year’s women’s basketball team did not return. There are six newcomers on this year’s squad, five of them freshmen, four of which played in Tuesday night’s season opener against USC.

It would be the veterans, however, that carried the load. Sophomore guard Jordyn Jackson led the team in points with 14, 12 of which were three pointers. De’Jionae Calloway was the one to put the team on her shoulders, though. The fifth-year senior had 13 points on 55% shooting, eight rebounds and three steals.

With such a young team, Calloway was thrust into a leadership role.

“It’s been an adjustment, learning what these new people do and trying to mix it to what we do and what we’ve done in the past,” Calloway said. “We’re a completely new team from what we do offensively and defensively.”

The young Matadors had to grow up quick against the Women of Troy, who had several freshmen in their own right. CSUN found themselves in foul trouble early, and 11 of the 21 points they gave up in the first quarter came from the free throw line.

“You look up over the stretch of the game, it ends up being a 16-point game and you gave them 11 free throws in the first quarter,” head coach Jason Flowers said. “That becomes a challenge to overcome.”

USC dominated them, but CSUN refused to back down no matter how hopeless things seemed. They fought their way back from a 6-21 deficit in the first quarter to 23-33 at halftime. The Matadors were down by as many as 22 towards the end of the third, and they seemed to be done until they went on a 9-0 run with less than three minutes to go in the game that got the Matadome going crazy.

The run was sparked by freshman Deja Williams, who had 11 points, all of which were scored by threes except for two free throws. She willed the Matadors while they were down by 20, and they found themselves trailing by 11 with less than two minutes to go.

“We talked as a team and we were saying, ‘don’t look at the scoreboard, just go hard. The scoreboard will do the job for itself,’” Calloway said of the Matadors’ resilience against the Women of Troy. “And we just pushed.”

The run would end there, however. USC took control like they had for most of the game to defeat CSUN by a final score of 69-53. The Women of Troy dominated the lead as they only trailed for 43 seconds in the game, all in the first quarter.

The Matadors’ play was marred by mistakes, especially early on. Sixteen of the 35 fouls called against them were in the first half, and 16 of their 23 turnovers also came before halftime. They gave up 30 points in the paint and 21 fastbreak points compared to 16 in the paint and 10 fastbreak points of their own. CSUN shot 24.4% in the game and 22.5% from deep while the Women of Troy shot 44.2% and 31.6% beyond the arc.

“I thought for the most part, we played hard. It wasn’t for a lack of effort,” Flowers said. “I think at times, there was a lack of toughness where fatigue started to play a factor. And instead of making the decision to be tough and fight through some stuff, I thought we gave in at moments and (USC) took advantage.”

Flowers believes that this team will be defined by how hard they play in every game, no matter how ugly or pretty it may be, and he is confident that the results will improve as the season goes on.

The Matadors will travel to Riverside on Nov. 9 to compete against the Cal Baptist Lancers, who are coming off a win over Long Beach State in their season opener.