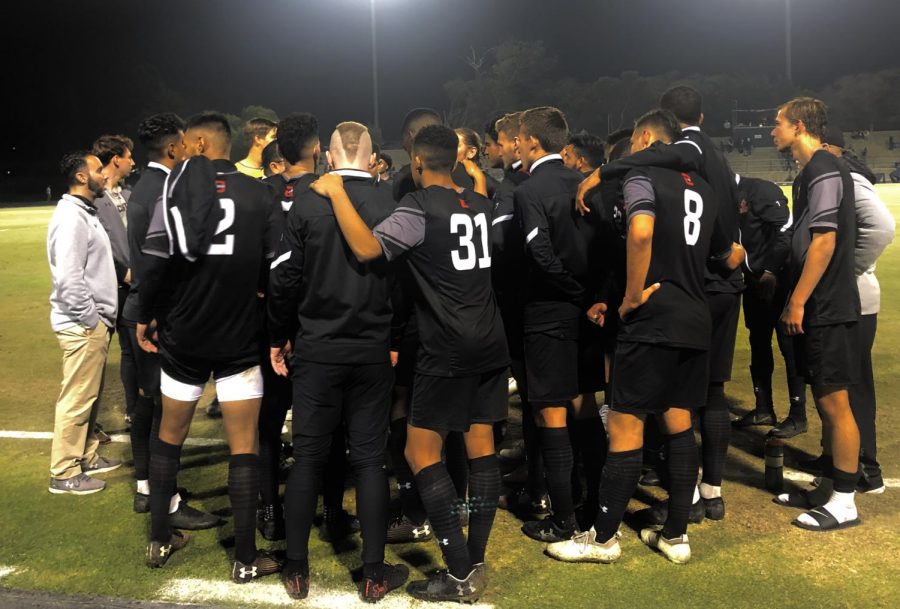 CSUN men’s soccer knocked off third seeded UC Irvine in the first leg of the Big West tournament in a chippy affair at Anteater Stadium.

The Matadors extended their winning streak against the Anteaters to six games while punching their ticket to the tournament semifinals for the second time in the past three years.

Irvine was tied for first place in the Big West before CSUN came to town and handed them consecutive losses. Head coach Terry Davila believed fortune was starting to turn the Matadors’ way, as they snuck into the playoffs in their final regular season game.

“Good teams that work hard create their own luck,” Davila said. “We have not had much luck throughout the whole year, but we’re getting momentum at the right time. To come here twice and play 180 minutes with only two goals allowed to one of the best offensive teams in the country. We’re very excited to go on to the next round.”

The action started fast, and a CSUN counter attack in the seventh minute featured a nifty inside-out two man game from juniors Daniel Trejo in the middle of the field and Julio Rubio from the left side. Rubio attempted a return cross to midfield, but it inadvertently went into the far side of the net. An audible “what the hell!” was exclaimed from the Matador bench as CSUN took a 1-0 lead.

The Anteaters put together several runs in the ensuing minutes, but were unable to put a shot on target. CSUN turned Irvine’s empty possessions into another counter attack in the 23rd minute when freshman Samuel Salter delivered a perfect through ball behind the Anteaters back line to a streaking Trejo. The junior knew exactly what to do as he delivered a right footed shot to the far post that eluded the keeper and shocked the Irvine crowd. Trejo shimmied back to his position sporting a 2-0 lead.

“It was a great chance in zone three,” Trejo said, who now leads the team with nine goals on the year. “The defender came up to me and I just took a little touch inside. Thankfully I was able to place it in the bottom right from the goalkeeper. It was a big goal and I’m very happy.”

After scoring seven goals in the first six games of the year, Trejo only found the net once in the proceeding 11 games. In order to make a deep run in the tournament, CSUN needs their star forward to revert back to his old form since they are 4-1-2 in games he scores and 4-6-1 when he doesn’t. Davila is certain that he can trust Trejo to lead his club.

“We’ve been working on Danny being less predictable,” Davila said. “Danny is one of the best overall kids that ever came through our program. He’s a tremendous learner and a tremendous student of the game. Everything that kid gets, he deserves. He’s a great student-athlete and we’re very lucky and proud to have him.”

Things got chippy throughout the rest of the half as seven yellow cards were dealt between both squads, four against CSUN and three on Irvine. The situation was exasperated going into the half when an Irvine player grabbed the ball with a few seconds still on the clock causing the CSUN bench to spill onto the field petitioning for a yellow card to be dealt, but to no avail.

Irvine came out of the break aggressive on offense with multiple corner kicks, but shots on goal were tough to come by.

The frustration led to a myriad of fouls by the Anteaters and a free kick for the Matadors in the 73rd minute from 10 yards outside the box. Senior Johnny Rodriguez chipped the ball into the scrum in front of the net and redshirt sophomore Khalid Hunter emerged victorious as he blasted home the third score of the game for CSUN.

Hunter spent most of the season recovering from injury and notched his first goal of the year in only eight minutes of action.

“Khalid is probably one of the most prolific scorers in the country,” Davila said. “It’s only his fourth game back but he has a knack for scoring goals. He’s a true poacher and that was a typical Khalid goal.”

With the end of their season on the horizon, UCI found a second wind on offense, relentlessly grinding out shot opportunities. The 82nd minute saw a free kick for the Anteaters to the left of the box. Redshirt junior Christian Gutierrez drove a low liner underneath the defense and a perfect bounce got past CSUN’s six-foot, five-inch junior keeper Paul Lewis to begin the Anteater comeback.

Things would get tighter in a hurry, when a perceived stoppage of play in the 89th minute caused confusion from the Matadors, and Irvine took advantage by inbounding to senior Jose Ortiz who slipped home their second goal, this one from 30 yards out.

It was too little too late for the Anteaters though as the Matadors hung on to eliminate Irvine by a score of 3-2.

“UCI is a great team,” Trejo said, “all we did was listen to our coach’s game plan. We knew it was going to be a hard game but we tried our best and were able to play our game.”

On the surface, a six-seed defeating a three-seed on the road would seem like an upset, but don’t tell that to CSUN.

“It doesn’t really feel like one,” Trejo said. “We’re always a team that wants to work hard and today was just another game. We’re focused game-by-game, and today Irvine was in our way. All we had to do was take care of them.”

Davila echoed these sentiments by expressing confidence in his team and acknowledged how scary it can be to see his squad across the pitch.

“We know we’re a good team, we know we’re very tough to beat and we knew people didn’t want us in this tournament,” Davila said. “They were hoping that we were going to get out, but now we have an opportunity against a great coached UC Santa Barbra team and it’s going to be a hell of a game up there Saturday night.”

The Matadors played to a scoreless draw in their regular season game against Santa Barbra at Northridge. Now they must travel to face the nationally ranked Gauchos on Saturday night at 7 p.m. with the winner advancing to the Big West championship.