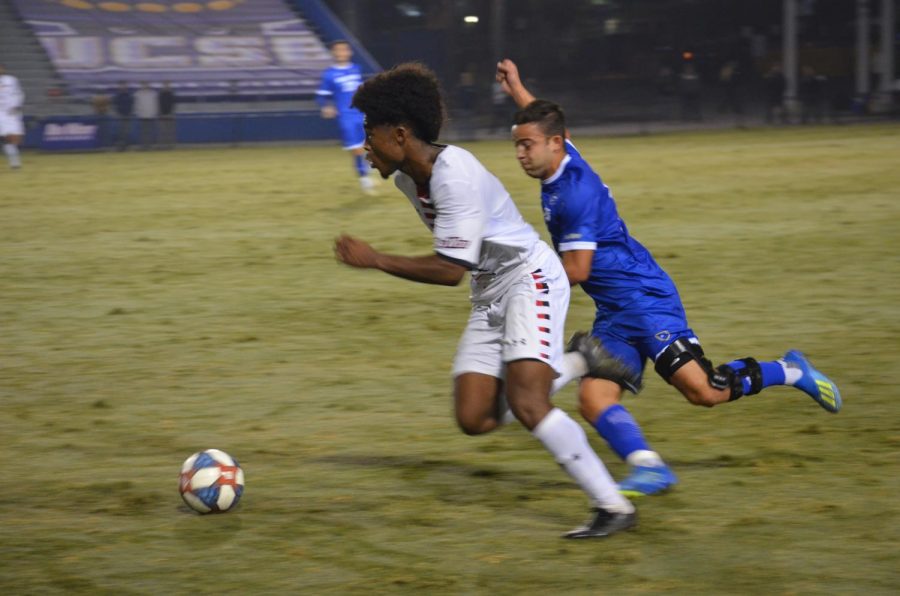 The sixth-seeded Matadors lost to the second-seeded UC Santa Barbara Gauchos in the Big West Men’s Soccer Tournament Semifinal on Nov. 9. The Matadors had defeated the third-seeded UC Irvine Anteaters 3-2 on Nov. 6 to advance to this semifinal matchup.

“At this point in the season, it’s about mental preparation,” head coach Terry Davila said. “You can’t do much after you played a game for everything on Wednesday night.”

The Matadors entered this playoff matchup with an overall record of 8-7-3, 2-3-2 in Big West conference play. This record was good enough for sixth place in the Big West regular-season standings. The Gauchos possessed an 11-3-4 record, with a 4-1-2 Big West record. They finished the regular season in second place, just behind the first-place UC Davis Aggies.

CSUN last went up against UC Santa Barbara on Oct. 26, when the match between the two ended in a 0-0 tie after two overtimes. Having just played against each other two weeks prior, both teams were quite familiar with each other.

“We didn’t do much training in the last two days,” Davila said. “We did a lot of film work and preparation like that making sure our bodies were prepared for the game physically and making sure they’re rested mentally.”

The Matadors were on the defensive side much of the first half. In the first eight minutes of the match, UC Santa Barbara had already gotten two shots to score. At the 16th minute, freshman forward Samuel Salter had a shot on goal, but it was saved by UC Santa Barbara goalkeeper Ben Roach. This shot by Salter was one of only two shots CSUN had in the first period.

At the 23rd minute, an injury to junior defender Scott Williams caused the pitch to open up for UC Santa Barbara and resulted in the first goal of the night by the Gauchos. Only five minutes later, UC Santa Barbara responded with another goal, bringing the Gauchos lead to 2-0.

As the first period came to a close, the Matadors had only two shots as opposed to UC Santa Barbara’s six.

“They attacked us on the wings, it was a good plan,” Davila said. “They took advantage of us being a man down and changed the momentum of the game. We just wish we had all our players healthy at that moment, but that’s soccer.”

CSUN came out for the second period with their season on the line. They immediately pressed the gas offensively, with sophomore forward Wolfgang Prentice having two shots in the first 10 minutes of the period.

At the 61st minute, UC Santa Barbara pressed offensively with a shot on goal, but it was saved by redshirt junior goalkeeper Paul Lewis. This was his first save of the half, bringing his total to two saves on the night. Lewis finished with three saves overall but gave up two goals as well.

The Matadors outshot the Gauchos in the second period 6-5. Three of those shots were on goal, but they were all saved by Roach.

In the last 10 minutes of the match, junior forward Daniel Trejo took it upon himself to make something happen offensively for CSUN. In an eight-minute span, Trejo took three shots, with two of them being shots on goal. However, they did not result in any goals for the Matadors.

In the 89th minute, UC Santa Barbra almost tacked on another goal to the score, but Gauchos forward Derek Kryzda’s shot went wide and hit the crossbar, sending a loud boom throughout the stadium.

The match ended in a 2-0 defeat for the Matadors. UC Santa Barbara advances to the Big West championship game against UC Davis, while CSUN now returns home with their season over.

In the end, CSUN was outshot by UC Santa Barbara 11-8. Trejo led the Matadors with three shots, followed by Salter and Prentice with two each. Even though they had their opportunities, the lack of scoring was the downfall for the Matadors.

“Everybody has problems, we lost five of our starters,” Davila said. “We were able to reinvent ourselves and got ourselves an opportunity to play in the Big West semifinals.”

CSUN finishes the season with an overall record of 8-8-3 and as one of the last four teams in the Big West Tournament.