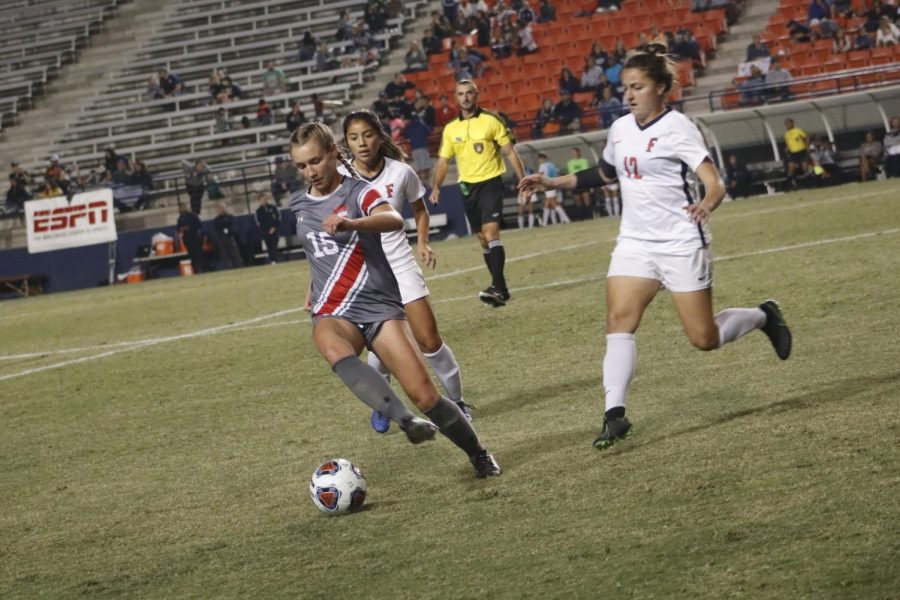 The women’s soccer team (12-7-3) lost against the Cal State Fullerton Titans 4-0 in a Big West Tournament final matchup on Nov. 10, coming up short of a conference championship and ending their season at Titans Field.

The Matadors were the second-seed in the tournament coming off a semifinal victory over the third-seed UC Santa Barbara 1-0. The Titans were the number one seed advancing to the finals over fourth-seed Hawaii 3-0 on Nov. 8.

The Matadors were outshot throughout the match by the Titans 16-4 and 9-0 in shots on goal. The Titans also held the advantage in the corner kicks department 12-0, not allowing a single corner kick in the whole match, and also led the way in the possession category 62% to 38% over the Matadors. The Matadors were called for 15 of the 23 total fouls in the match and a yellow card was shown to CSUN sophomore defender Kassandra Matthews in the 80th minute of play.

“You have to tip your hat off to them, they played a good side,” head coach Keith West said. “We got to be better, I have to be better and I wished I coached a better game today.”

Junior midfielder Avery DeWitt led the way for the Matadors with a total of two shots throughout the match with freshman midfielder Cindy Arteaga and sophomore forward Alexis White both contributing with a shot a piece.

Sophomore goalkeeper Amanda Delgado recorded fives saves in the loss while allowing four goals in the match. The Matadors conceded all four goals in the first half while Delgado had three of her saves come in the second half in an effort to help prevent any more scoring.

The Matadors finished with 25 goals scored in the season on 228 total shots and allowing only 20 goals on 274 total shots. The Matador goalkeepers recorded 91 total saves and had 11 shutouts in the 22 games played this season.

Junior forward Bethany Fitzsimmons and White both finished the season with six goals apiece for the Matadors. Delgado led the way in goal with 76 saves, 19 goals allowed, eight shutouts and a 9-7-3 record in her 19 appearances in goal this season.

The season comes to an end in a losing fashion for the Matadors but they were able to turn things around from their 2018-2019 season when they finished with a 6-9-1 overall record and 2-6 Big West record, finishing eighth in the conference. This season the Matadors doubled their win total from last season and finished with a record of 12-7-3 overall and 5-3 in Big West coming up second in the conference. This season, the Matadors tied a program record with their 12th victory that was set by three other teams in 2001, 2004 and 2010 under Coach West.

“I just have to keep getting better as a coach to be better for my team and this group is going to do what they have to do to get the job done. They are very resilient and they faced a lot of adversity this season,” West said. “We had eight players out for the year, that is a lot of players down and losing your captain late in the season was hard so these things happen and they are a part of it.”

The Matadors lost their team captain senior defender Amanda Martin to an injury she suffered before the conference tournament on Oct. 27. Martin was awarded the Big West Conference Defensive Player of the Year this season. The Matadors will be losing two seniors going into next season with Martin and defender Amber Edemann wrapping up their Matador careers.

“Amanda, Bethany and Amber brought this team together in the beginning of the year and they ignited us in a way that I have never seen before,” West said on the team’s resiliency and leadership this season. “We are extremely young and I was nervous about it coming in, but I think our senior leadership really got us through the year. Our freshmen were unbelievable followers and they are going to become good leaders by watching how our juniors and seniors led this year.”

Now with the season coming to an end for the Matadors, Coach West was able to share some of the positives that he will take from this season moving forward into next year.

“To get to this point in the year with nine teams in the conference and were able to play in the last game of the year for the conference championship,” West said. “We were right there and we came up short. I cannot be more proud of my group and in our coaching staff for everything they have done throughout the year. It has been an amazing journey and I am just riding the wave with them.”