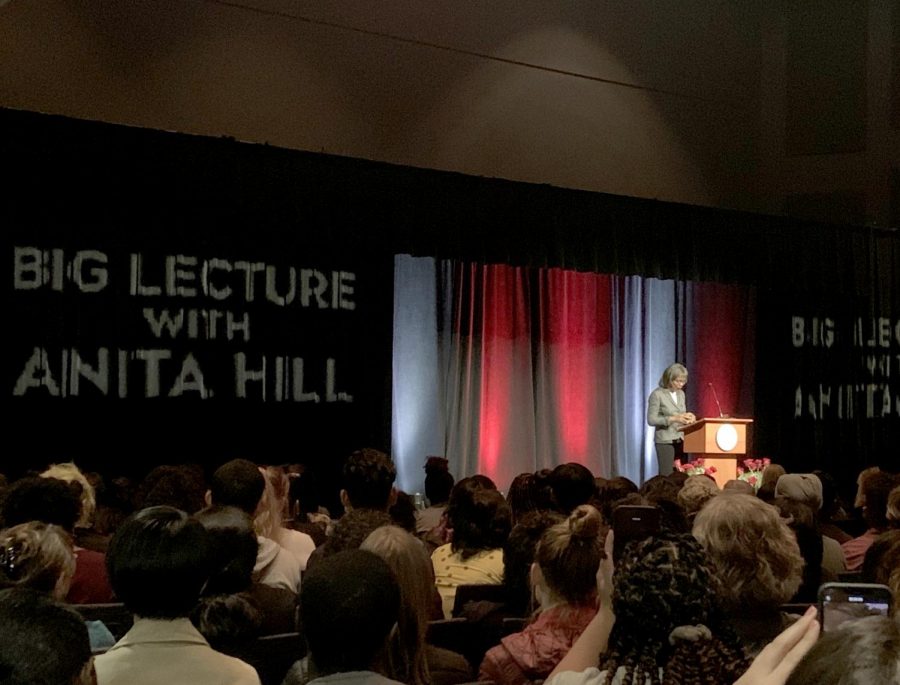 Students and faculty watch as Anita Hill shares her story during the "Big Lecture with Anita Hill" event coordinated by Associated Students at the Northridge Center on Nov. 7. Photo credit: Raychel Stewart

Hundreds of students and faculty flooded the Northridge Center on Nov. 7 to attend Big Lecture, where Anita Hill shared her experiences to the CSUN campus.

An established lawyer and academic, Hill is famous for her testimony in 1991, where she accused then-U.S. Supreme Court nominee Clarence Thomas of sexual misconduct. Since the testimony, Hill has been an advocate for women’s rights, especially in the wake of the #MeToo movement.

She started off the lecture discussing the hope she had in 2018 when Dr. Christine Blasey Ford came forward and shared her testimony against then-U.S. Supreme Court nominee Brett Kavanaugh. While the results weren’t different from the hearing that took place in 1991, Hill explained she remains positive because we’ve come so far.

She expressed to students to not be discouraged by how much work is left to do, but to be inspired by how much has been accomplished since her testimony. Hill shared the statistics from a 1976 Redbook Women’s magazine poll, which showed that 9 out of 10 women have been subjected to unwanted advances in the workplace. Her point was to show that the only people talking about sexual assault at the time were women; no one would imagine it would be a political hot topic in 2019.

“I am proud to say America is further along than it was in 1991, and I am also proud to say I will not allow the Senate Judiciary Committee or any committee to rob me in my belief in a just world,” Hill said.

Following her explanation she offered her input on what we can do to make a difference. She stated that our country has a long history of inequality on a government level and we can only achieve equality if we all take a step back and examine the role we play as a society.

“If we want to achieve gender equity, we have to look at all of our biases,” Hill said. “We all have biases against somebody society has taught us to.”

She ended her lecture with a final takeaway: On top of unlearning certain behaviors, we need to get men involved in the fight for gender equality for anything to change.

Attendees then had the opportunity to ask Hill questions during a 20 minute Q&A session, where Hill answered questions about her stance on then-Senate Judiciary Committee Chairman Joe Biden, her opinion on sexual harassment trainings that give ambiguous definitions of sexual harassment, her advice for aspiring politicians and her advice for women who are afraid to come forward.

In response to the last question, Hill ended the Q&A session by pointing out the complexity of the situation from the sexual harassment victims’ point of view.