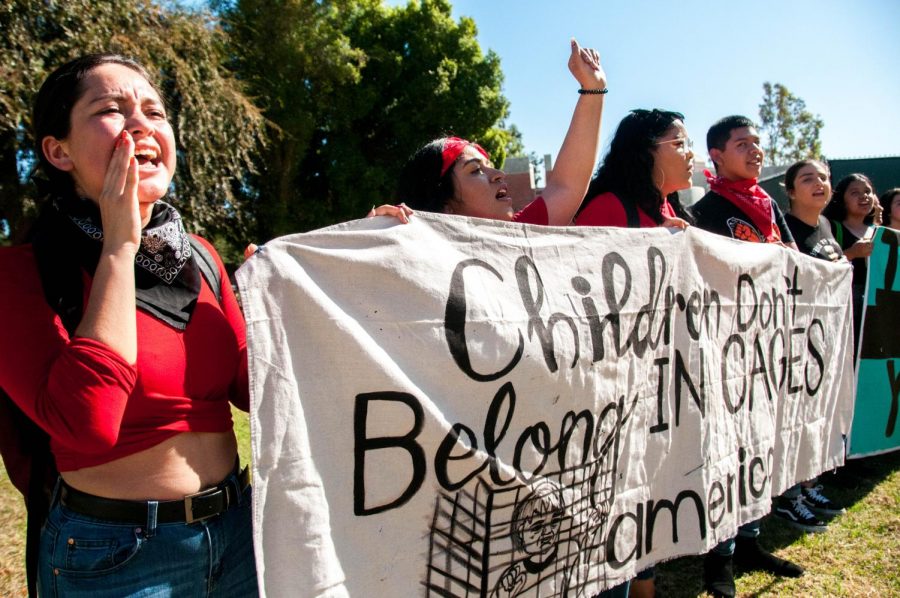 Protesters on the Chicanx House Lawn as the walkout comes to an end on Nov. 12. Photo credit: Sonia Gurrola

A Supreme Court hearing that will decide the fate of Deferred Action for Childhood Arrivals spurred national student walkouts in support of keeping the program, which protects nearly 800,000 undocumented immigrants brought to the United States as children.

On Nov. 12, walkouts organized by student clubs and immigration organizations stretching from CSUN to Los Angeles gathered crowds of hundreds of protesters who carried signs that read “Abolish ICE” and “Support DACA students.”

Protesters at CSUN, led by members of MEChA, Dreams To Be Heard, Central American United Student Association and the Students of Color Coalition, marched through Sierra Hall and Jerome Richfield, disrupting classes and encouraging fellow students and professors to join the movement as they held up signs and chanted “ICE has got to go!” and “The people united will never be divided!”

The crowd gathered in front of the Oviatt Library to read a list of demands directed at the administration.

“Will CSUN support undocumented students?” said Kelly De Leon, a member of the Students of Color Coalition, to the crowd of supporters.

Students chalked up the Oviatt steps with phrases such as “Defund campus police and fund students,” “AB1460” and other statements that represented what they were protesting for.

Student protester Ruben Ramos explained that the protest would also voice support for Assembly Bill 1460, the bill to make ethnic studies a requirement on all CSU campuses and oppose a quantitative reasoning requirement that would require students to take four years of math classes which would be a disadvantage to minority communities.

Faculty and administrators followed the students around campus, watching the protest from the sidelines.

William Watkins, Vice President for Student Affairs, said, “We are proud to be a part of a nationwide effort to bring attention to the desires to retain DACA as a program. The university and administration is clearly in support of that. I think the leadership here and faculty and staff support the existence of the program and we hope that the Supreme Court comes to the right decision.”

CSUN Chicana/o studies professor Martha Escobar, while not present at the protest, encouraged the community, especially students, to get involved. She expressed that students protest as a way to create the world they envision and to be treated in a humane and dignified way.

“Our students, even if they are not undocumented themselves, have family members who are undocumented and these issues being about DACA, greatly impact them and their ability to just be here,” said Escobar.

She explained that it takes a toll on students who are working towards their degree while also worrying about their loved ones.

“How can we expect our students to show up and be ready to learn when they’re concerned about, you know, their parents being on deportation?” she said.

An email sent by President Dianne F. Harrison on Nov. 12 stated: “CSUN is committed to educating, supporting and protecting all students regardless of immigration status. We stand in solidarity with DACA-protected students and all other undocumented students.”

From the Oviatt, the protesters marched through Bayramian Hall, eventually ending at the Chicanx House where students gathered in a circle and expressed their need for support for undocumented students and recited testimonies.

Meanwhile, students from 11 high schools in the Los Angeles area took to the streets of downtown LA along with organizations from USC and UCLA during the DACA walkout demonstration, which was organized by the Coalition for Humane Immigrant Rights of Los Angeles.

The walkout began on the steps of the Federal Building where students, college alumni and organizers spoke about the importance of DACA and the impact the program had on their lives.

“I rose up so my undocumented voice can be heard!” said Roxeli Garcia, a 16-year-old high school student who arrived in the United States with her parents when she was three months old. “I was three days away from qualifying for DACA,” she said. “When (I heard) that I couldn’t apply for DACA, I felt uncertain of who I was in this country.”

Diana Escamilla, CHIRLA organizer for downtown Los Angeles, said the support from high school students is very important because they are the next generation of voters.

“This reminds us that our fight continues,” Escamilla said. “Students in high school that are here today don’t qualify for DACA but if they had it, it would greatly benefit them. They’re our allies.”

These protests were in response to the arguments heard by the Supreme Court from three cases that challenge President Trump’s decision to terminate DACA that would leave nearly 800,000 recipients unprotected. In 2017 the Trump administration pushed to end the program, but lower courts ruled that current recipients could renew it until the Supreme Court made their final ruling, according to The New York Times.

In 2012, former President Obama established DACA to temporarily protect children brought into the U.S. and receive a work permit that lasted two years but could be renewed. The program does not give legal status to applicants nor a pathway to citizenship, according to CSUN’s EOP DREAM Center. Out of the 3.6 million DREAMers, or undocumented immigrants who arrived in the U.S. before turning 18, only about 800,000 have received DACA status, leaving nearly 2.8 million unprotected.

A recent bill passed by Congress in March of this year, named the American Dream and Promise Act (H.R.6), could potentially give over 2 million undocumented immigrants permanent residence in the U.S. and provide temporary humanitarian protection, The Sundial previously reported. If the bill passes, it would be the largest immigration bill since 1986, but it has yet to make it through the Senate.

While DREAMers continue to face uncertainty as the Supreme Court weighs in on the decision to end DACA or reinstate the program, Cecily Myart-Cruz, NEA Vice President of United Teachers Los Angeles, expressed a message of hope and encouragement to the crowd as the LA walkout concluded.

“We stand in support of the immigrant youth movement,” said Myart-Cruz. “Now is the chance to stand before the Supreme Court.”