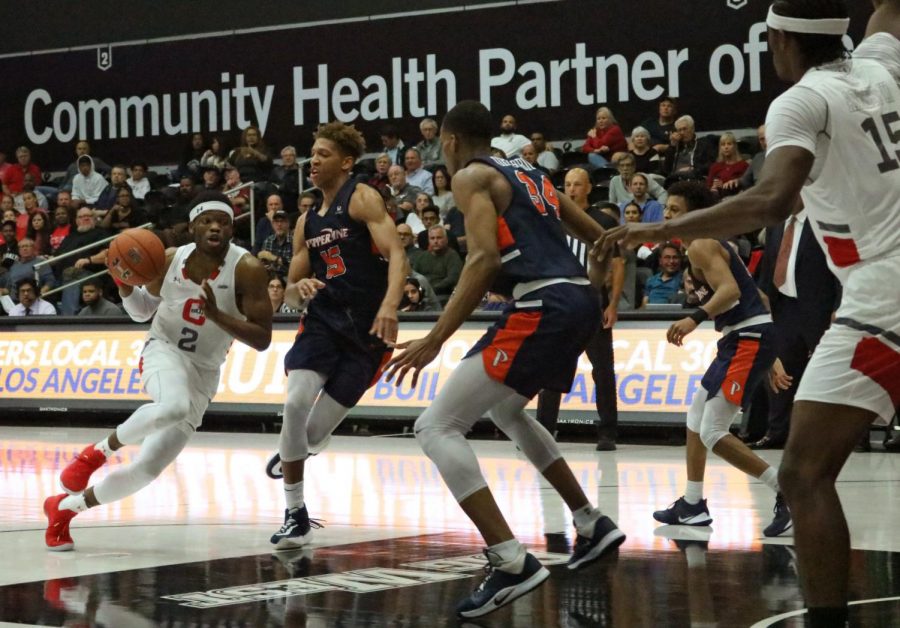 CSUN guard Elijah Harkless (2) dribbles the ball to the key on Nov. 12 in the Matadome. Harkless had six points, ix rebounds and six assists against Pepperdine. Photo credit: Edward Nenedzhyan

The CSUN men’s basketball team played against the Pepperdine Waves on Nov. 12 for the first home game of the 2019-2020 season. With a final score of 94-82, the Matadors lost their home opener.

The Matadome was packed with people ranging from students to parents and even some Pepperdine fans. The crowd was amped the entire game, whether it was booing the refs or when the CSUN dance team danced at halftime, they were always making noise. With all those screaming fans, one would think it would cause a distraction but head coach Mark Gottfried thinks otherwise.

“Phenomenal. I thought it was great, our crowd was great and I’m excited about our crowd,” he said. “We just got to deliver for them, we got to do a better job so hopefully we can throughout the year.”

After coming off two losses to open this season against Oregon State and New Mexico, CSUN needed to make some changes and shifts if they wanted to beat Pepperdine.

“From the last two away games, I felt like I wasn’t aggressive enough. We are missing some scoring right now, so this game I just wanted to be really, really aggressive,” junior guard Terrell Gomez said. “I didn’t really care what my percentage was going to be. I just feel like to give this team a chance right now, I have to be really, really aggressive and do the best I can and try to really play hard on the defensive end.”

That’s exactly what he did. After tip-off, Gomez hit a three for the first points of the game. Throughout the rest of the first half of the game, however, Pepperdine’s defense was strong and CSUN’s passes could have been executed a lot better.

With 11:33 left in the first half, the Waves were up 18-10 and the refs called multiple travels on the Matadors. CSUN’s defense in the first half was lackluster; there were many moments in the game where Pepperdine players were left wide open to shoot and rebounds were a dime a dozen for the Waves.

The team fought hard during the game. Gomez was on fire and many other players were as well. With 8:30 left in the first half, freshman forward Festus Ndumanya threw down an insane dunk that made the whole crowd go crazy, putting the score at 16-21, slowly closing the gap.

When there was 1:26 left in the half, redshirt junior Lance Coleman II hit a 3-pointer to bring the score to 23-35, keeping CSUN in a fighting chance to win this game. By the end of the first, Pepperdine led CSUN 37-27.

Gomez led the team in scoring in the first half with 12 points while shooting 4-for-8 from the field, 2-for-3 from deep, and 2-2 from the free throw line.

Coming into the second half of the game, CSUN seemed like a whole new team as they came out strong offensively, and both teams were thriving from the three-point range.

With 15:43 left in the second half, Gomez hit another three causing Pepperdine to call a timeout with the Matadors still trailing 41-48.

Despite starting strong in the half, the Matadors fell into a dry spell where they did not score until redshirt freshman Brendan Harrick subbed in and immediately hit a three for their first points within six minutes of no scoring.

With four minutes left in the game, the score was 60-81 with Pepperdine in the lead. Coleman came back into the game and hit a three, moving the score to 63 to 81.

With two minutes left in the game the team kicked it into high gear, with Gomez coming out with back to back threes, but it was too little too late for the Matadors as they fell to the Waves 94-82.

Both teams statistically were not that different, Pepperdine led CSUN 20-17 in rebounds, 12-11 in turnovers and CSUN led 8-7 in bench points.

The main difference Pepperdine had over CSUN was 14 points in the paint compared to six for CSUN and 40.6% shooting compared to 34.8% for the Matadors.

Gomez led both teams in scoring with 33 points while Harkless led CSUN in rebounds, assists and steals with six, six, and four each.

One of the biggest struggles of the game for CSUN was defense, because there weren’t a lot of rebounds and they left some key players open like sophomore forward Kessler Edwards from Pepperdine to shoot multiple three-pointers. At the end of the game, Edwards was 8 for 13 in shooting threes.

“Defensively, our defensive transitions have to be better, we’ve got to rebound the ball a little bit better, so a long list of things,” Gottfried said.

The Matadors will be in the Legends Classic with their first game of the tournament on Friday, Nov. 15 against Auburn University.