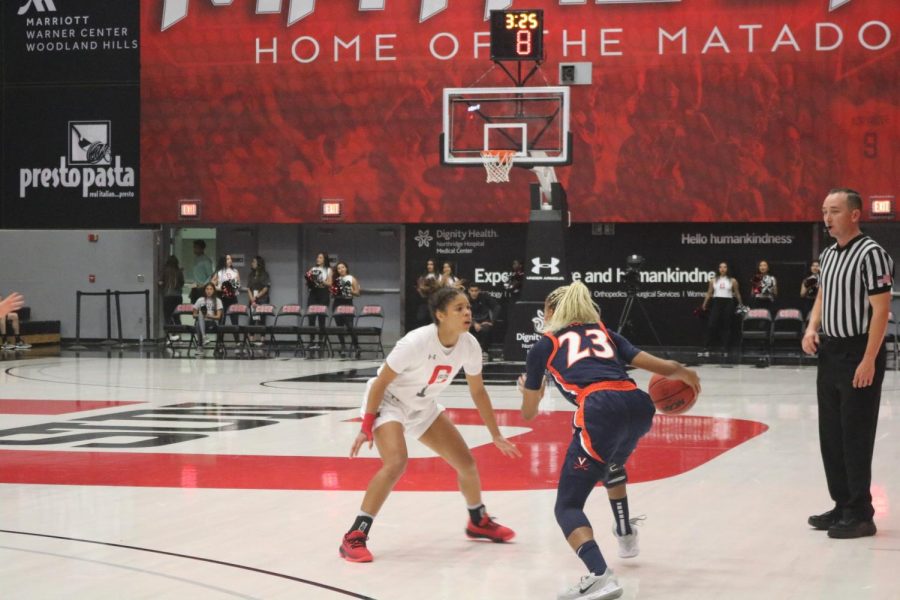 CSUN fell to 0-3 on the season after yet another loss on Tuesday, this time to the Virgina Cavaliers (2-1).

In the first quarter, both teams were closely matched during the first five minutes. When the score was tied at seven, Virginia senior Dominique Toussaint scored five straight points to give the Cavaliers the lead. The Matadors cut the Virginia lead to three on two moments before Toussaint ended the quarter with a shot to make the score 16-11 at the end of the first period.

The CSUN deficit went up to nine when Cavalier senior Jocelyn Willoughby scored the first two points of the second half. CSUN stormed out to an 8-0 run that put the Matadors within one, after freshman Deja Williams hit two free throws.

CSUN cut their deficit to one when junior Meghann Henderson hit a three-pointer with 5:54 left in the third quarter. While leading 38-34 with 3:16 to play in the quarter, the Cavaliers outscored the Matadors 13-4 to go into the fourth quarter with a 13-point lead.

Virginia held CSUN to 37 points for over seven minutes after going on a 21-0 run, which continued into the fourth quarter. The Virginia run was ended on a three-pointer by Williams with 4:19 left to play in regulation. Virginia ended the second half by shooting 58.6% from the field (17-for-29) to earn their second win of the season.

Willoughby led Virginia in scoring with 19 points. Toussiant and Amandine Toi both had 12 points while Carole Miller had 10. For the Matadors, redshirt senior De’Jionae Calloway led the team in scoring with 10 points and added eight rebounds to go along with that.

“We have to be a lot tougher. When it is winning time, there are plays to make and we’ve got to be tougher in order to get things done,” said head coach Jason Flowers. “We did some good things early on and kept the game close. When it was time to make plays, once again third game in a row, we did not get it done.”

The Matadors have some things to work on in order to get out of the 0-3 hole they are in. The team needs to work on getting better defensively and also have to make plays when it matters most.

“Offensively we have to be able to put the ball in the basket and make shots,” Flowers said.

CSUN goes on the road to play the University of San Francisco Dons (1-1) at War Memorial Gymnasium on Nov. 16 at 2 p.m. before returning home when they take on Portland State on Nov. 21 in the Matadome at noon.