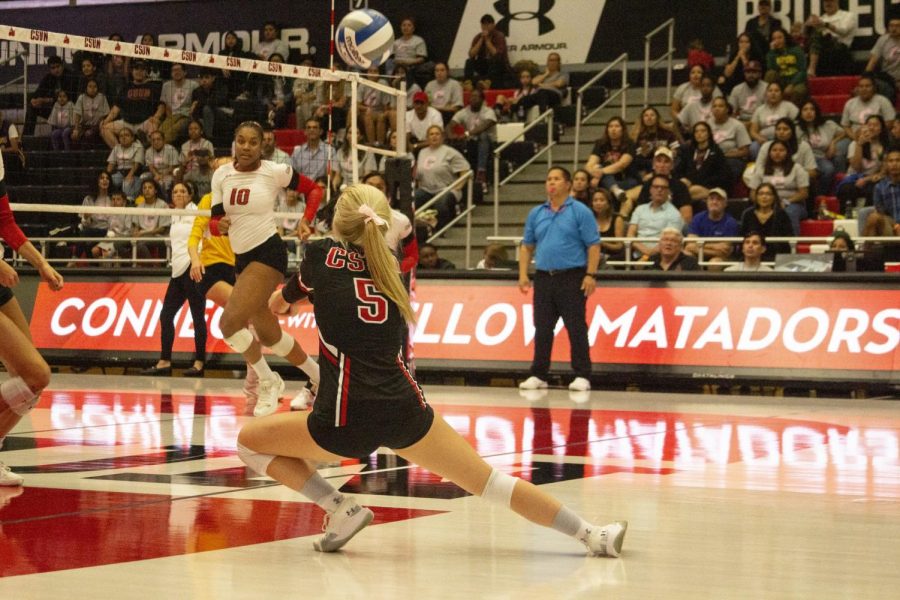 During the second to last home game of the season, the Matadors women’s volleyball team lost in three sets to the Cal Poly Mustangs on Nov. 15.

“(We were) playing hard for our seniors. Our senior class is so influential for our team … they work hard, we work hard and we just wanted to play out for them,” said sophomore outside hitter Seyvion Waggoner. “So these games against Cal Poly and UCSB we just wanna, you know, play our hardest for our seniors.”

During the first game CSUN struggled and made a lot of little mistakes. Both teams had great counter hits but CSUN seemed a little off.

Starting the first set, the Matadors made the first point, then immediately Cal Poly returned the next serve to tie the game at 1-1.

After some strong playing back and forth the Matadors seemed to struggle to get themselves out of a hole with the Mustangs quickly gaining control and led for a while, making the score 9-3 in favor of the Mustangs.

During some strong volleying, sophomore outside hitter Nicole Nevarez hit a strong return that Cal Poly tried to counter but ended up hitting it out, putting the score at 9-4 Cal Poly.

CSUN was stuck at four points for a while as Cal Poly kept scoring by making back-to-back points to put the Mustangs up 16-4.

Close to the end of the first game CSUN kept coming back by fighting to try and gain more points, but Cal Poly’s score remained up and they won the set 25-10.

The start of the second game was rough for CSUN as Cal Poly put up a lot of points right away, with the initial score sitting at 5-0.

At one point the Matadors challenged a play, saying that the Mustangs touched the ball before it went out so the point should go to CSUN. However, after reviewing the tapes, the challenge went in favor of Cal Poly to put the score at 6-0.

The first point of the second game for CSUN was by senior middle blocker Morgan Salone with a kill, putting the score at 7-1.

Towards the end of the second game, the Matadors started to play stronger and began to make more points.

“They keep themselves motivated, it’s a great group of young women,” said head coach Jeff Stork about the team’s motivation to keep fighting. “They’ve had a great year, as far as team leadership and accountability and cohesiveness.”

A strong play and teamwork by CSUN helped them to get two back-to-back points, putting the score at 20-14, causing Cal Poly to call their first timeout of the entire match.

The Mustangs seemed a little shaken up as they began to bump into each other, causing frustration and their second timeout.

Immediately out of the timeout CSUN scored and the whole crowd went crazy as the score was 22-19, the closest the game had been so far. It wasn’t enough, though, as Cal Poly ended up winning the match 25-19.

CSUN came into the third game powerful, with the ball going back and forth over the net. Cal Poly eventually hit it out, putting the score at 1-0, the first time during the match that CSUN was in the lead.

Both teams constantly went back and forth and were tied for a while at 10-10. However, Cal Poly eventually pulled away and put themselves in the lead 22-14.

Towards the end of the third game, CSUN fought hard to win the set. Waggoner made two points in a row, putting the score at 24-19, but Cal Poly was able to score the set and match point right after, sweeping the Matadors.

Before their next match, the team needs to work on different aspects of their game as the season gets ready to come to a close.

“(We need) tougher serving. We gotta get our opponent out of system a little bit more, which will typically set up more opportunities to transition kill,” said Stork. “That’s the big one and it makes it a whole lot easier if teams were playing out of system against us.”

CSUN will play in their last home game of the season on Nov. 16 against the UC Santa Barbara Gauchos, who, just like Cal Poly, came out on top earlier in the season.

Going into the game against UCSB, Stork explains how losing won’t stop the team.

“They know that today has nothing to do with tomorrow, we’ve asked them to forget about this as quickly as they can and get ready for Santa Barbara,” he said.