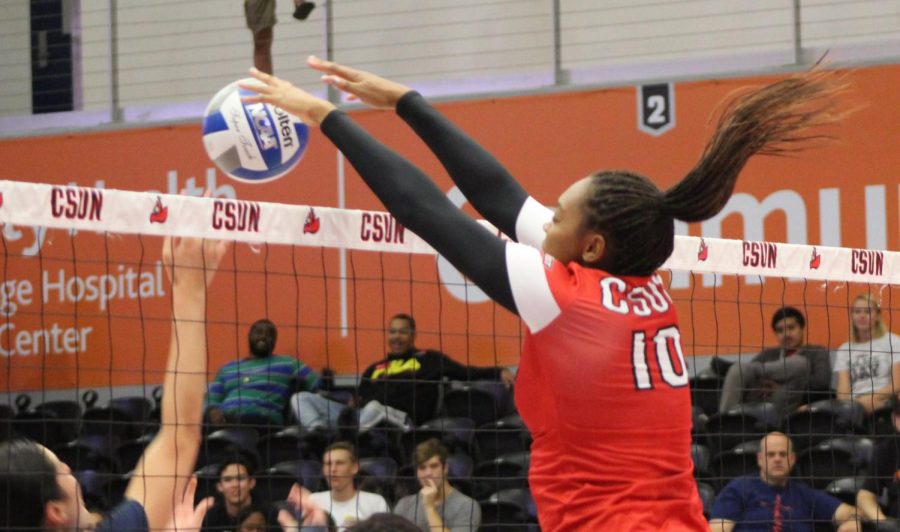 The women’s volleyball team fell to the visiting UC Santa Barbara Gauchos in three sets 18-25, 21-25, and 22-25. This match was CSUN’s final home game of the season.

“We played hard, there was never a lack of fight in our team,” said head coach Jeff Stork. “We’re just not scoring enough points.”

The Matadors came into this game ranked sixth in the Big West Conference standings while their opponent, UCSB, was ranked third.

The first set started with an offensive explosion from the Matadors. The team jumped out to a quick 7-3 lead to start the match, playing extremely hard out of the gate, with players diving at the floor and putting their bodies at risk in order to keep the play alive.

The Gauchos began to pick it up offensively and soon closed the gap and tied with the Matadors at 10-10. The middle of the set was a back-and-forth affair, with neither team getting a significant lead over the other.

The largest deficit during this period was when the Gauchos led 17-14, but a quick 3-1 run behind a kill from senior middle blocker Morgan Salone brought the Matadors one point away from the tie at 18-17.

However, that kill was the start of a 7-1 run by UCSB to close out the Matadors and win the first set. Kills and errors from the side of the Matadors fueled this run, and the Gauchos didn’t look back.

“The energy was there, the effort was there, that’s all I could have asked for,” said senior setter Kamalu Makekau-Whittaker. “(Stork) always tells us the more you go for it, the more you’ll get up.”

The second set started off evenly enough for both teams, going point-for-point and eventually getting to a score of 7-7. The Gauchos jumped out to a quick 5-1 run and all of a sudden led the Matadors 12-8.

The Matadors were able to score two quick points, but the Gauchos continued to push ahead and extending their lead over the Matadors. At the height of this run, UCSB led CSUN 18-11.

The Matadors did not roll over facing this large deficit, instead the team rallied and went on an offensive explosion, scoring six out of seven points to shrink the Gaucho’s lead to 19-17. Sophomore outside hitter Seyvion Waggoner carried the Matadors offensively during this run, getting four total kills which included three straight kills to complete the run.

The set stayed close until the end, with the Matadors never trailing by more than three points. However, the Gauchos were able to hold off the Matadors to win the set 25-21.

The Matadors came out with a sense of urgency to start the third set. They needed to win this set in order to keep the match alive.

Similarly to the second set, the third set started off evenly for both teams. Any time either team was down, they would go on a quick run to catch right back up. It stayed even up to when the score was 13-13. This is when the Gauchos began to step on the gas offensively.

Santa Barbara killed the tie and went on an aggressive 7-1 run against the Matadors. They were able to push the score up to 20-14 and this run included four straight kills by the Gauchos, with only one point during this run coming as a result of an error.

The Matadors did not give up against this adversity; instead, they went on a run of their own. CSUN began to shrink the gap, slowly chipping away at the lead. They went on an 8-4 run to bring the score to 24-22. They went from down six to down two in no time.

Even though the Matadors had all the effort to come back and win, it didn’t go their way as a kill from Santa Barbara ended the set 25-22. This concluded the match with the Gauchos winning 3-0 against the Matadors.

Waggoner led the team in kills this match with 10, followed closely by Salone with eight. Makekau-Whittaker and redshirt sophomore setter Hannah Merjil both had 15 assists, counting for almost all of the team’s assists this match.

“It wasn’t the outcome we wanted, but I’m proud of every single one of these girls,” said Makekau-Whittaker.

With this being the last home game of the season, keeping up with tradition, the seniors on the team were honored with a ceremony.

“I’m so grateful to have played here the last four years,” said Salone. “My teammates have made it so enjoyable and I’m grateful.”

The five seniors on the team were given flowers as well as a video tribute. Parents and friends filed onto the court to help honor the senior class.

“We have five very capable and very bright (seniors) in the program,” said Stork “It’s nice to see them off with such a great event at the end of the match.”

The Matadors now hold a 12-15 overall record with a 7-8 record in Big West Conference play. Although this was the home finale for the Matadors, there is still one more game left in the season on the road against first-place Hawaii on Nov. 21.

“It’s great to be able to finish my season back home,” said Makekau-Whittaker. “We’re hoping to give them a good show and maybe get an upset.”