Rushing Waters: A Mural that Celebrates the History of Pacoima 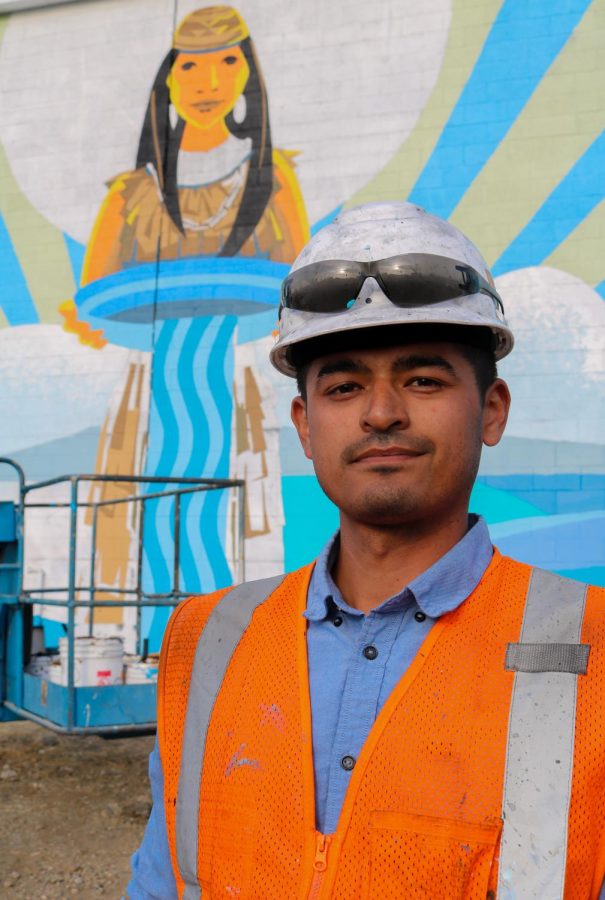 Ponce graduated from CSUN with a degree in 3D animation. Since then he has been committed to his artistry, paying his way through college by painting windows in Granada Hills. He then put his digital skill sets in the Special Effects team of films like Interstellar and was hired by Disney. Throughout his career, he has always dedicated time to paint murals now dedicating to it full-time. "Rushing Waters" is his latest mural in the area of Pacoima. Photo credit: Ivan Salinas

What was once a giant gray wall, and a favorite spot for local graffiti artists, is now becoming the home of a new mural made by Levi Ponce and his team of artists from the San Fernando Valley. “Rushing Waters,” the name being given to the mural, will depict life in the neighborhood of Pacoima and a few of the landmarks significant to the community.

Locals from the neighborhood had suggested to Ponce that he should paint the wall, which runs parallel to San Fernando Road near the 118 west freeway ramp. He didn’t take much interest in it at first due to how complicated it would be to get this project going, which has been in the making for roughly five years.

BIG THANKS to @leviponce for allowing me and @morphatron to cover this beautiful mural with the #mavic2pro and introducing us to the artists. This mural is going to be the largest mural in the San Fernando Valley. And thanks to @theechoparker for supplying the equipment, We couldn’t have done it without you. Artists: @jpmurals @tetriswai @rysta__ @goreystein @jpmurals @reddortiz @_meversus @insomniart and any other artists I may have forgotten. #drone #dji #dronevideos #leviponce

That changed when property owners were on board with the project of a mural. Ponce first met with LA Councilman Felipe Fuentes and Assemblyman Raul Bocanegra to fund the project, which didn’t work out initially. It wasn’t until he met with Councilwoman Monica Rodriguez, who currently represents Council District 7, that she allocated $100,000 dollars to complete “Rushing Waters.”

“Shortly after I got elected I knew this wall has been a historic frustration to members of our community,” Rodriguez said during a brief interview on the site of the mural. “While other people have always dreamt about doing something like this it was my passion to get this through and work with Levi to help create an image that would capture the spirit of who we are.”

While Rodriguez’s cabinet gathered all the resources necessary, Levi and his team were able to focus solely on the mural.

“When it comes to painting Pacoima I tend to paint the same motifs. I tend to paint Pacoima. The same neighborhood inspires me,” Ponce said. “This mural is no different. Here, we depict the freeways; Pacoima is surrounded by the 118, 210, 5, 170.”

Other LA landmarks that will be in the mural are Hansen Dam, Whiteman Airport and the Sylmar Aqueduct. Ponce commented on the meaning of the name Pacoima, which is rumored to mean “Rushing Waters,” but after speaking to local Fernandeno Tataviam Tribe, he found that wasn’t the case. “Nonetheless, water is a huge theme in this mural,” he said.

The artwork is meant to celebrate the Native American Heritage local to Pacoima lands, too. Ponce spoke with Tribal President of the Fernandeno Tataviam Band of Mission Indians, Rudy Ortega Jr., to ensure an accurate representation of the Tataviam woman depicted as its centerpiece.

More cultures will be highlighted on the left side of the mural, which features Scorpion grasses and flowers commonly known as “forget-me-not flowers,” which is symbolic of the commemoration of the Armenian Genocide in 1915. In this way, Pacoima is shown as a culturally diverse neighborhood.

Prior to the mural installation, this area was already frequented by locals. Graffiti artist Gorey Stein, who is on the team of artists working alongside Ponce, said he used to hang out in the area since he was a teenager. “This wall means a lot to me,” he said.

Artist Erica Friend is also on the team working on the mural. As a female artist, she recognizes some of the additional struggles female artists have to get through to work on a mural — namely that most people only seem to look for male artists. But being a part of this project has been an opportunity to share her skills as an artist of the community.

“Rushing Waters” will be one of the largest artworks in the San Fernando Valley. A project of this scale has not been seen in the San Fernando Valley since Judy F. Baca’s half-a-mile-long mural: The Great Wall of Los Angeles. It was installed in 1978 and it was painted on the walls of the Tujunga Wash stream below ground level, running parallel to Coldwater Canyon Avenue between Oxnard Street and Burbank Boulevard. Baca’s mural captures the history of Los Angeles, and she worked alongside hundreds of local youth and artists to complete it.

The current push to beautify the streets with more public art has been more present during Rodriguez’s term. According to a press release statement, apart from allocating funds to the completion of the mural, she has also reserved half a million dollars to be invested into mural art projects across the seventh district.

This is a continuation of the efforts Ponce himself envisioned when he began painting.

“I wanted the San Fernando Valley to be known for the arts. I set out to create a body of work that will make the difference,” he said.

Pacoima is home to more than 20 murals stretched out across Van Nuys Boulevard known as Mural Mile. Eight of these murals were made by Ponce in collaboration with Pacoima and other San Fernando Valley locals.

“There’s always been artists in Pacoima. What separated my work from others was that I didn’t paint a single mural, they were a collective body,” he said.

The mural is scheduled to be completed and has an opening reception on Nov. 25. Angelenos will be able to admire the completed mural from the window of a Metrolink train. It will be a sight for many coming home as they exit off the 118 freeway, and briefly accompanying those walking along San Fernando Road.